Take me to:
at:
Let's go
Let's go
Award-winning public engagement at UCL

The UCL Provost's Public Engagement Awards celebrated staff, students and community partners at the university's dazzling ceremony in May 2019.

Seven award-winning projects illustrate UCL’s distinctive approach to public engagement. Read on to find out what made these submissions stand-out and get an idea of UCL's outstanding and collaborative work with the wider public.

You can also view a playlist of videos about the winners at the bottom of the page.

Albert is the manager of Action Youth Boxing Intervention a Real-Talk programme which supports Camden-based young people at risk of, or who are already excluded from school to re-engage, through a combination of non-contact boxing training and rational emotive/cognitive behavioural therapy techniques. He has worked with UCL (specifically Charlotte Woodhead from Institute of Epidemiology & Health) to evidence the impact of the programme through a successful grant from the UCL Centre for Coproduction in Health Research as one of their pilot projects.

This project has encouraged the contribution of local young people who might not otherwise have got involved in UCL-related research. This includes local young people from black and minority ethnic groups, young people at risk of school exclusion, whose behaviour can be challenging or who have been involved in criminal behaviour, and/or young people who are experiencing social isolation and low self-esteem. As part of the pilot Albert coordinated and led three steering group meetings and six workshops with young people. At the end of the pilot project he co-produced a theory of change and a research plan that will be used to bid for additional research funding.

Albert has also been actively involved in additional UCL Centre for Coproduction activities which aimed to gather the learning around the coproduction process from the pilots and coproduce an evaluation framework for the Centre's work. Albert took part in these in his own time, bringing his perspective as a local community organisation leader and member of the local community.

Briony’s research and public engagement activities are based around challenges faced by homeless people with advanced ill health. The engagement work has included developing and delivering training for people working in homeless hostels and health care professionals around palliative care alongside other researchers and the homelessness charities St Mungo’s and Pathway. Additional funding from The Oak Foundation has now been secured to continue this work.

Briony also co-produced a video with homeless hostel staff and residents to share some of the challenges of being homeless and ill with health care providers which is used in the above training. She also led a successful bid to the UCL Knowledge Exchange and Innovation Fund to create a free to access website to host information and resources developed through the research. The website has received almost 7,000 views from around the wold. Staff from homelessness services, hospices and a range of health care professionals are accessing the site.

Both the community of people with lived experience of homelessness and those supporting them have been engaged in all stages of her research, leading to research recommendations that have been then been embraced by said communities. This has had considerable impact on attitudes towards palliative care and support for homeless people. This work has contributed to the growing recognition of the issue in the media and UK Parliament. 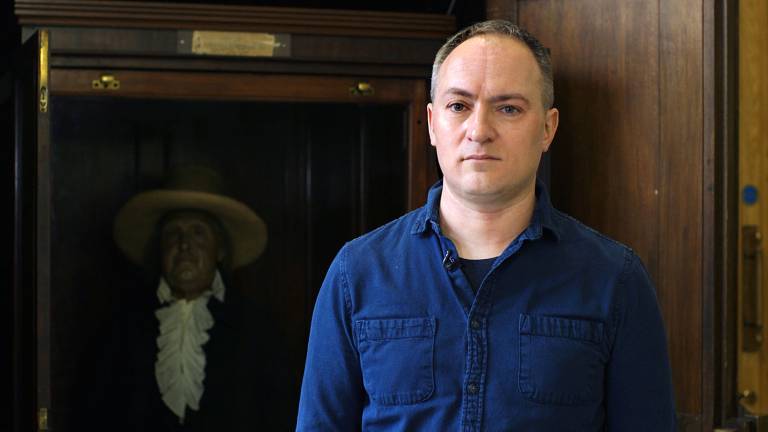 Bob developed the Hide & Seek project, an innovative walking tour of Bloomsbury designed to throw light on the peoples and places that have contributed to the area’s rich and diverse LGBTQ+ heritage. Bob devised the itinerary, format, content and publicity materials. He also recruited, coordinated and trained a group of LGBTQ volunteer guides to recount stories and anecdotes connected with specific locations along the route. The format proved very popular and the walks were a 'sell out' success, being reprised three times in 2018.

The walks started with a talk delivered by Bob where he reflected on UCL's own LGBTQ+ histories. Walkers were then issued with route maps, and set off on a ‘queer’ exploration of the neighbourhood. Walkers encountered a diversity of voices and perspectives on the tour and were encouraged to share their own stories. He is currently working with UCL Urban Laboratory to turn Hide & Seek into an audio tour with additional content, potentially also collaborating with Ramble London based in UCL Geography.

This project grew from Bob’s significant and sustained public engagement in the field of LGBTQ histories and equalities. Highlights include organising Art + Activism: Queer and Feminist Visibilities, a conference featuring a line-up composed mainly of artists, performers, activists and curators; advising on a history display and trail at the British Museum; participating in the steering group for the ‘Pride of Place’ project on England's LGBTQ heritage, launched by Historic England; and giving numerous public talks at festivals and events programmes, several of which have been successful online (including the most watched UCL Lunch Hour Lecture on YouTube, with more than 1.2 million views to date.)

Research for All is an open-access peer-reviewed journal that ‘has quickly established itself as one of the most highly regarded academic spaces on a global level for those involved in the co-creation of knowledge amongst university and community-based intellectuals’ (Rajesh Tandon & Budd Hall, UNESCO Co-Chairs in Community-Based Research and Social Responsibility in Higher Education). It is a public engagement project in its own right, bringing together academics and communities from across the world to share expertise. Launched in 2017, it has published five issues (two per year) containing 70 articles, achieving over 11,000 article downloads. The editors are now receiving a steady stream of unsolicited contributions.

The journal publishes authors less often heard in academia, including partners in NGOs, theatre, local TV, commercial enterprises, NHS, museum and government, teachers in schools or further education, students, and freelance participation practitioners. Almost half of the published articles model academics and community partners writing together. Editorials explore synergies between knowledge held by academics and their community partners, to enhance the credibility of each to the other. The journal provides a focal point for debate and thinking about the challenges of designing, delivering and leading engaged research in any area of study, articulating the case for engaged scholarship and contributing to culture change.

She was also responsible for the online promotion through social media and targeted online advertising which led to a sell-out. As the event was live-streamed she organised an online system to capture questions from the audience (both online and in the room) for the speakers during the panel discussion session, allowing for more open and interactive discussion with the audience. This was implemented following recommendations from the 2016 showcase. The event was recorded and is still available online.

Anouchka used the event to develop public engagement skills within the Institute. She worked with Masters students from the ICN and members of her professional services team to shape the day, select the speakers, set the topics and manage more practical issues such as setting up the web site, selling tickets, and helping with those last minute tasks on the day. This event has led to these staff members, both students and professional services to continue on their engagement journeys, many of whom have since taken part in additional public engagement opportunities in the institute.

Helen is the co-founder of the UCL Pond Restoration Research Group (PRRG) and the Norfolk Ponds Project (NPP), a partnership between UCL, Norfolk Farming & Wildlife Advisory Group, local farmers, and other interest groups. Her work centres on engagement of farmland pond restoration research.

Helen has been the NPP secretary since its initiation running over 20 events including several field-based farm pond restoration workshops for farmers, agri-environment & conservation professionals, the local community and school children (which involved Helen dressing up as a frog and arranging innovative pond games in the farm yard). The farm pond workshop events have typically taken place at the NPP’s demonstration pond landscape in Briston, Norfolk. These events allow for both formal and informal engagement opportunities. In addition she has also been instrumental in organising pond restoration events aimed at local volunteers, resulting in some 50 ponds being restored; leading to huge measured biodiversity benefits. She has also given advice to many farmers via phone calls, e-mails and field visits.

To add to her public engagement portfolio, in 2016, Helen conceived, applied for and was awarded a British Ecological Society project called the “Great Twin Pond Dig” which twinned small groups of citizen scientists in a Norfolk village with a Lancashire village. Both groups of locals are monitoring ponds in their respective villages before and after restoration. In each case citizen scientists have helped to restore their own village ponds. They have taken part in Bioblitz days where UCL and local natural history experts have gathered to record as many species as possible. These events have enabling much knowledge-transfer and learning about pond biology.

Lena and Tse-Hui have been working together for a number of years to engage the public around the topic of sustainable sanitation. Their work started in 2016 when they collaborated with a number of London allotment societies who had installed composting dry toilets. During this project they worked with the allotmenteers to better understand their motivations and concerns about the composting toilets. Since then, they have showcased their work to the public through a series of events including workshops at UCL and the Bethnal Green Nature Reserve.

They are now working with Spitalfields City Farm where they have run a number of workshops with different groups (including city professionals, the local Bangladeshi community, teenagers who have been excluded from education and primary school children) to better understand views on composting toilets. Together with the farm, they have installed a composting toilet on site and used what they learned from the workshops to design artwork inside the composting toilet cubicle. The artwork will serve to engage with toilet users about the nutrient cycle and more sustainable sanitation solutions in the urban setting. The toilet is now open to the public and their work will continue by gathering opinions from toilet users as well as making measurements of the compost quality and feeding these back to both the farm and the public.

The evolution of their work is evidence of their commitment to public engagement as a two-way process. Lena and Hui continue to gather data and develop research publications from these collaborations. The projects provide data and interdisciplinary case studies of sustainable sanitation, which is a global challenge for cities.

Find out more about our winning projects in this playlist, or find the individual videos on Youtube.

Nominations for 2019/20 will open later on this year. To be kept up-to-date with news about the awards and other activities, you can join the UCL Public Engagement mailing list.

Coming to see us?
Get directions to:
More about Public Engagement 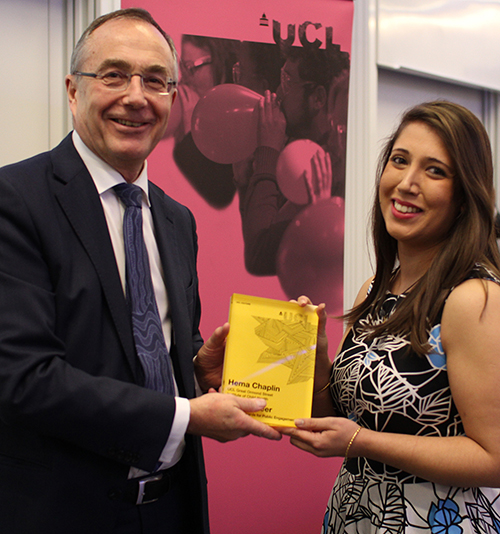 Winners and nominees in 2018 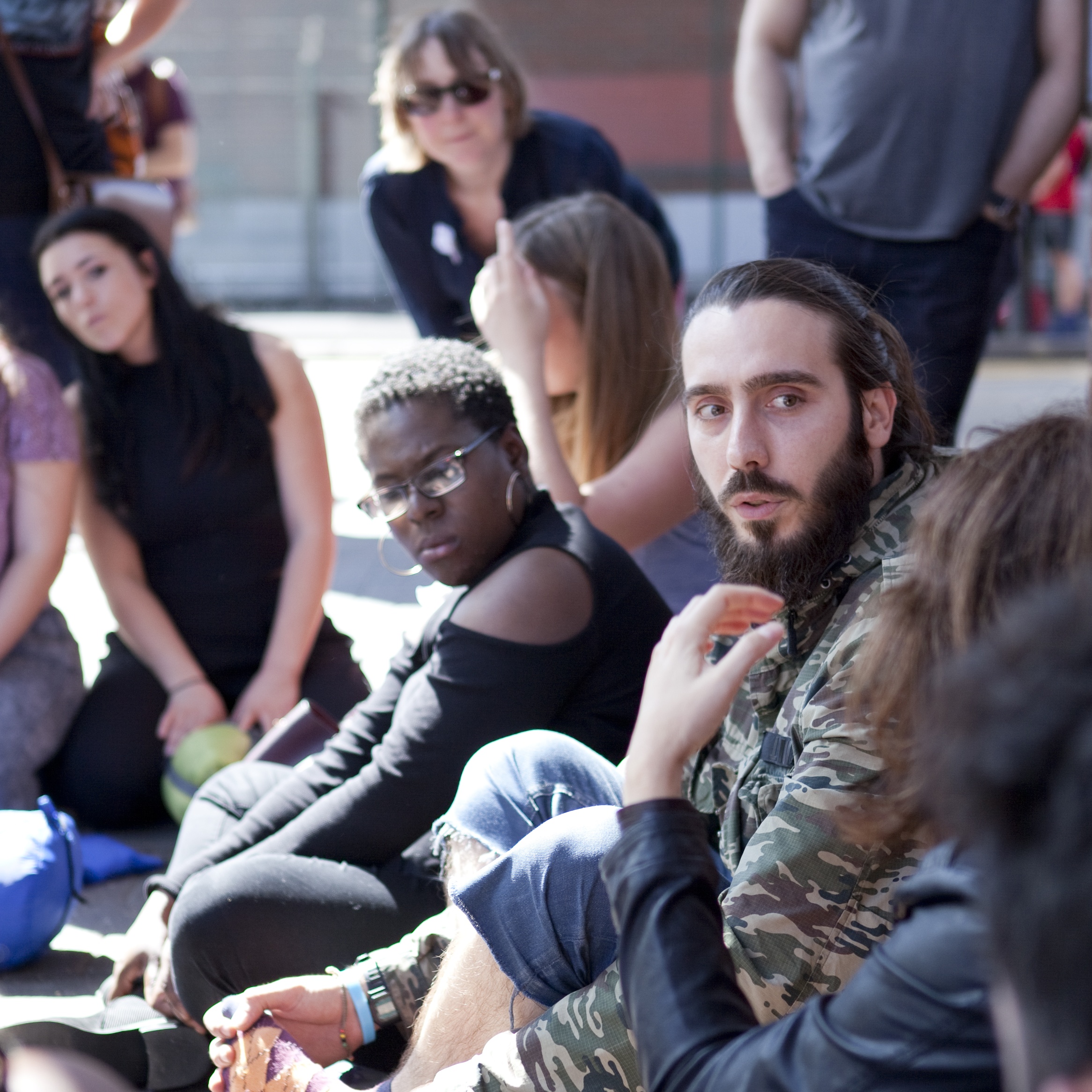