This week UCL Culture News features a takeover by Oliver Patel, Manager of the UCL European Institute and Research Assistant for UCL Grand Challenges. Oliver holds an MSc in Philosophy and Public Policy from LSE and a BA in Politics and East European Studies from UCL.

Over the next three articles, Oliver will be reflecting on on our Transformative Technologies festival which happened back in June. The programme of events was fuelled by UCL research exploring the power of technology, and its potential to radically reshape the world we live in. So let's dive in and see what he found! 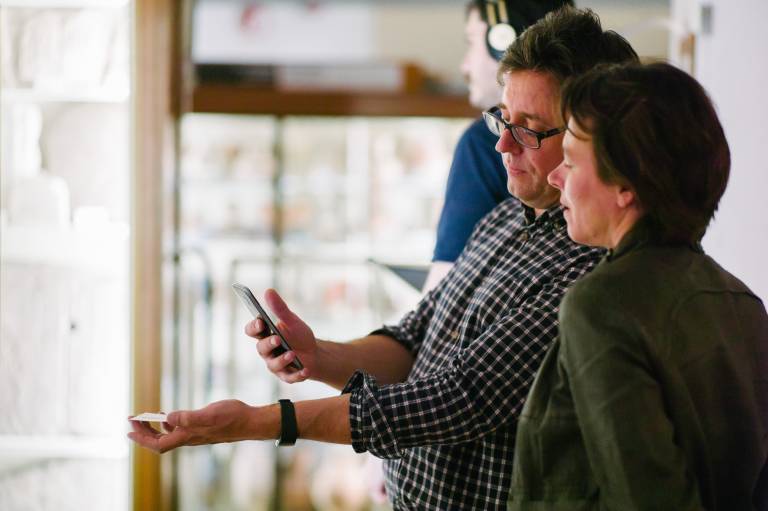 There is a wide range of tools and technologies enabling people with visual impairments to navigate the world and undertake everyday tasks and activities. Screen readers – which generate a voice to read aloud what would be seen on screen - have been around for a while, whereas others, like assisted vision smart glasses, are a more recent development.

Innovation in this field is advancing at an impressive rate. This is especially true at UCL, which has just launched the Global Disability Innovation Hub, a major centre for disability innovation research. UCL’s impressive expertise in this area was on public display in the Visual Impairment Hackathon. This event, one of the most unique in the Transformative Technologies Festival, showcased innovative technologies which have the potential to transform museum experiences for visually impaired people.

Those who attended this interactive hackathon got the chance to try these technologies out for themselves and were even able to talk to the researchers behind them. All the tech that was on display is designed to make museum experiences more accessible and inclusive for people with visual impairments, empowering them to enjoy museums in their own way. 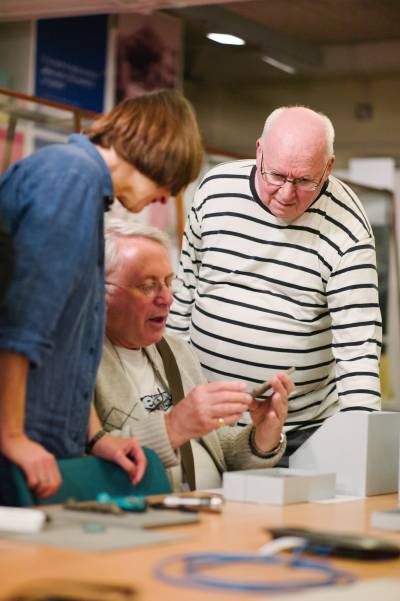 Underpinning everything was a philosophy about why such innovation is important. Rafie Cecilia, a UCL PhD candidate whose research focuses on the experiences of visually impaired people in museums, explained that people with visual impairments are not a homogeneous group. They have different learning styles and want to engage with museums in different ways. This is why the current one-size-fits-all approach of special tours and audio guides is insufficient. According to Rafie, the only way to achieve equality for visually impaired people - at least in their museum experiences - is to develop a comprehensive range of new technologies and resources, so that as many visually impaired people are accommodated as possible.

Judging by the range of tech on display, this could soon be a reality. The most impressive gadget was the OrCam, a very cool piece of kit. It consists of a pair of glasses with a camera and speaker attached. When I put them on and looked at text, the speaker read the text perfectly to me. The camera also recognises a wide range of objects, so it can accurately describe what’s in front of you. You can even download faces to it, and it uses the facial recognition technology to tell you who’s standing in front of you. 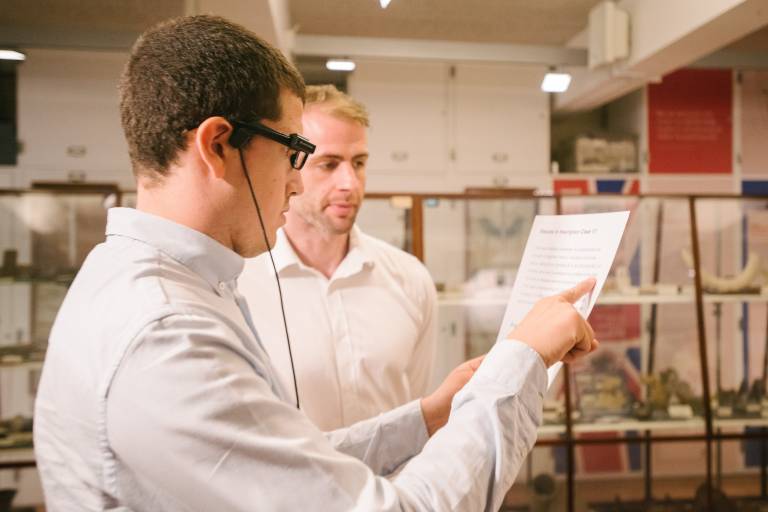 The most impressive thing about the device is that it actually works - clearly it has the power to transform people’s lives. When I pressed Sean, OrCam’s marketing manager, on potential ethical issues, he didn’t seem too concerned. However, as such technology becomes more mainstream, questions about whether the camera records everything or whether the biometric information it stores could be hacked will keep cropping up.

Less advanced but equally transformative tech on display included a booklet of tactile drawings of museum artefacts, such as hieroglyphic drawings from the Petrie Museum collection. There were even 3D printed replicas of museum artefacts, which enable you to touch and feel museum objects as never before. Such innovations have the potential to enhance museum experiences for people both with and without visual impairments, and I certainly felt like I was learning more about the artefacts through touching them. Although this field of research is relatively new, the Visual Impairment Hackathon showed that lots of impressive and exciting work is being done, both at UCL and beyond, to improve museum experiences for the visually impaired. 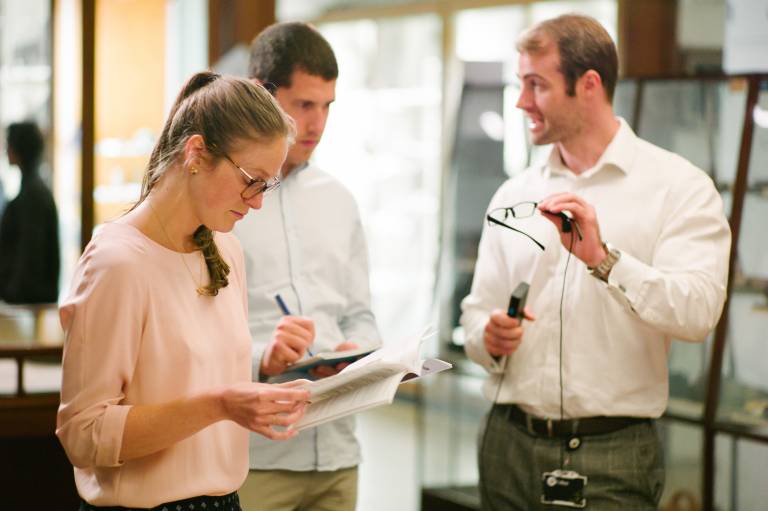 If you missed it the first time, the Visual Impairment Hackathon will appear again as part of the Bloomsbury Festival. Join us at the Petrie Museum on 21 October 2-4pm.
Share this:
Other articles like this one: 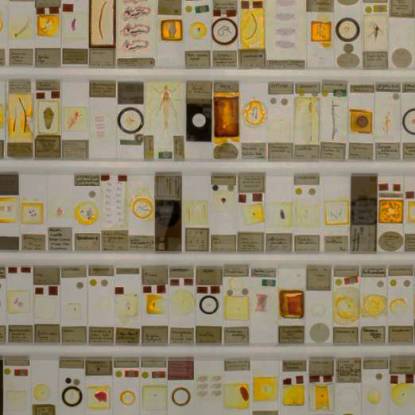 Our museums are open!
UCL Culture is home to many incredible museums, including the Grant Museum of Zoology, the Petrie Museum of Egyptian Archaeology and UCL Art Museum.  See everything from dodo bones and the world’s rarest skeleton, the quagga, to Hawara Mummy portraits and the Tarkhan dress from ancient Egypt.  Opening timesWe are happy to announce that the Grant Museum of Zoology and the Petrie Museum of Egyptian Archaeology are open to the public every Tuesday - Friday from 1pm-5pm and every Saturday from 11am-5pm.Tickets go online 2 weeks in advance with a few more released on the day. The Petrie Museum will be temporarily closed from 26 July - 24 September 2021 while we improve our collections storage and working space.The UCL Art Museum will reopen on 29 September 2021. Book tickets for the Grant MuseumBook tickets for the Petrie MuseumHow we’re keeping you safeCOVID-19 guidanceThe safety of our staff, volunteers and visitors is paramount and so we have decided to keep in place a number of our Covid-19 safety measures beyond 19 July.In each of our museums we’ve installed sanitising stations, and our staff and volunteers will continue to wear face coverings. We’re keeping visitor numbers low and we’ve set-up one-way routes for you to follow.In return, we expect you to wear a face covering inside our museums and when moving around the UCL campus (unless you are not able to for personal reasons).  We expect our visitors to show common courtesy and respect to each other around distancing and if you develop any symptoms of Covid-19 after your visit, please contact NHS Test & Trace. All visitors over the age of 16 are encouraged to provide contact details on arrival, or check-in using the NHS Test & Trace app.Check before you visitBeing able to safely open is reliant on the health of our staff and volunteers. If members of our team become unwell or are asked to self-isolate, we may have to close the museums. If you have prebooked your ticket, we will inform you as soon as we know. We will try and give as much notice as possible, but please check our website and social media in advance of your visit.These measures have been drawn up in accordance with industry best practice and guidance issued by the Association of Leading Visitor Attractions.These measures will stay in place until 31 August at the earliest.Keep in touchSign-up to our monthly e-newsletter and follow us on Twitter, Facebook and Instagram. [[{"fid":"14303","view_mode":"small","fields":{"format":"small","field_file_image_alt_text[und][0][value]":"Good to go icon ","field_file_image_title_text[und][0][value]":"","field_caption_heading[und][0][title]":"","field_caption_heading[und][0][url]":"","field_caption[und][0][value]":"","field_float_left_right[und]":"none","field_file_image_decorative[und]":"0"},"type":"media","field_deltas":{"1":{"format":"small","field_file_image_alt_text[und][0][value]":"Good to go icon ","field_file_image_title_text[und][0][value]":"","field_caption_heading[und][0][title]":"","field_caption_heading[und][0][url]":"","field_caption[und][0][value]":"","field_float_left_right[und]":"none","field_file_image_decorative[und]":"0"}},"attributes":{"height":"250","width":"250","class":"media-element file-small"}}]] 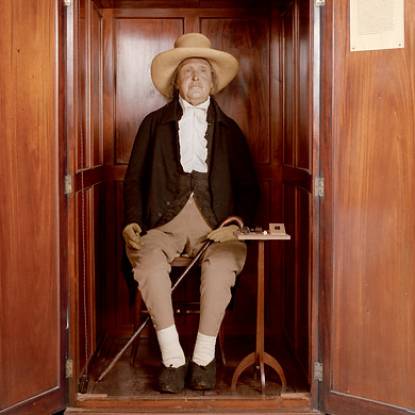