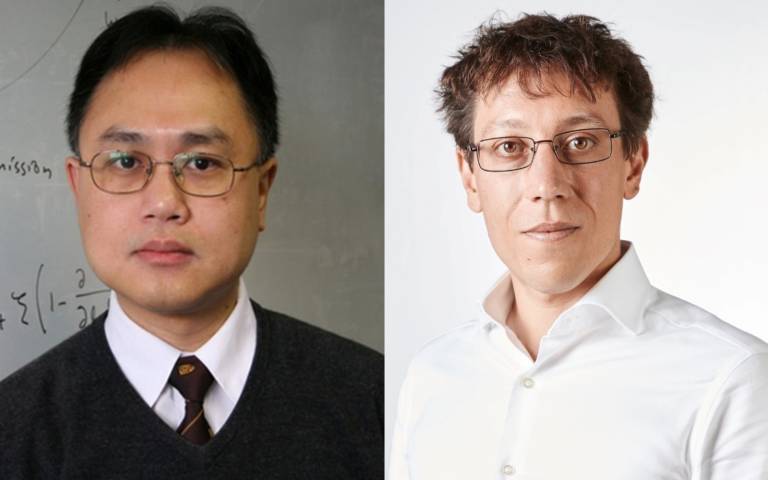 Matteo Agostini (HEP) and Kinwah Wu (MSSL) joined the Cosmoparticle Initiative as core members in May 2022.  They will co-supervise a Cosmoparticle PhD student on the project “Towards the era of multi-messenger neutrino astronomy with the P-ONE experiment”, starting in October 2022.

Matteo Agostini’s research focuses on neutrinos, ghost particles with the potential to unlock the deepest secrets of Nature. Before joining UCL as an STFC Ernest Rutherford Fellow in 2020, he worked at TUM (the Technical University of Munich) and at the Gran Sasso Institute and National Laboratory in Italy. He also received a PhD from TUM in 2013. He spent one year of his PhD at the Max Planck Institute for Nuclear Physics in Heidelberg.

Kinwah Wu has broad research interests, including the study of gravitational waves from black hole-magnetic star systems, large-scale magnetic fields, and general relativistic radiative transfer. Following his PhD in 1989 from the Louisiana State University in the USA, he worked at the Australian National University, NASA, and the University of Sydney before joining UCL in 2001.

Matteo said “I love cross-disciplinary environments where the collision of diverse ideas, perspectives and approaches enhances creativity and innovation. My research on neutrinos brings together theory and experiments in particle, nuclear and astrophysics. I believe the Cosmoparticle Initiative is the perfect platform to boost my activities and build new exciting collaborations.”

Matteo added “Multimessenger astronomy is the next frontier in science, and we need experts in very different fields to tackle it. I look forward to meeting colleagues working on neutrinos, gamma-rays, gravitational waves, blazers, and starburst galaxies. I am also interested in the impact of neutrinos on the CMB and the large-scale structure of our Universe.”