The first detection of gravitational waves in 2015 opened a new window on the Universe, based on gravity rather than light. For all its promise, this field is still in its infancy. Researchers in the Cosmoparticle Initiative are helping lay groundwork to bring it to maturity. 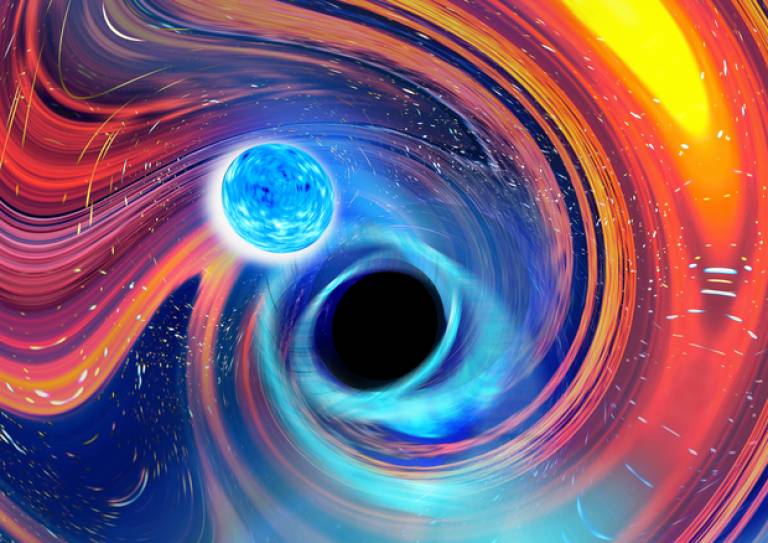 Gravitational-wave observatories like LIGO and Virgo detect waves produced when black holes or neutron stars collide. Measuring these waves will help determine the expansion rate of the Universe. That rate is currently mired in controversy, because the two existing techniques yield different measurements. A third measurement will help decide whether this indicates a missing ingredient in cosmology.

Current observatories detect some tens of black-hole merger events per year, along with a handful of collisions potentially involving neutron stars. However, continuous improvements and additions to the existing network of detectors will yield thousands of events by the end of the 2020s. Combining these detections will give far greater precision on cosmological measurements, but first we must learn how to process the data. Two recent results from Cosmoparticle PhD student Francesca Gerardi and core members Stephen Feeney and Hiranya Peiris make progress towards solving major analysis challenges.

The first, by Feeney, Peiris and collaborators published in Physical Review Letters, demonstrates how to use large samples of neutron-star-black-hole (NSBH) collisions to determine the expansion rate of the Universe. The work concludes that, by 2030, roughly 100 of these mergers will constrain the rate to 2% precision. Following this work, the first discoveries of NSBH mergers have been  announced by the LIGO/Virgo Collaboration.

The second result, led by Gerardi, tackles one of the main biases in GW analyses: selection effects. For example, instrumental noise randomly boosts the signal from some events, making them more likely to be detected. This work used a powerful machine-learning method to encode the selection effects, enabling future measurements of the expansion rate to be both accurate and computationally tractable.

Francesca Gerardi said, “Gravitational waves will be key in piecing together the huge puzzle we are trying to construct in attempting to understand the extraordinary Universe we live in. Because these waves could have such a revolutionary impact in a few years’ time, we must first ensure our analysis methods produce the unbiased answers we need.”