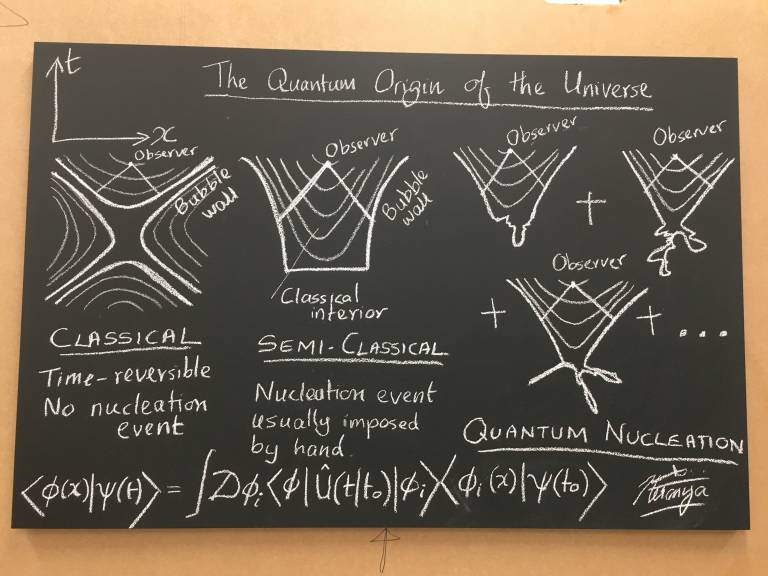 In August 2018 Professor Hiranya Peiris was among a group of scientists invited to contribute to an exhibition curated by Ariane Koek, founder of Arts@CERN, the interdisciplinary arts/science/technology programme based at the world’s largest particle physics research laboratory, the home of the Large Hadron Collider. 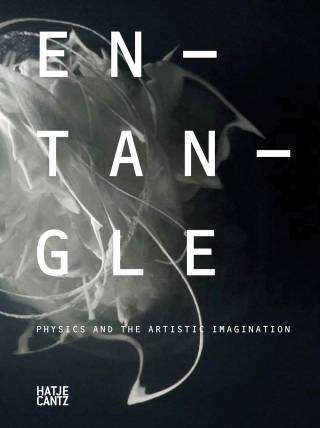 The exhibition, entitled ‘Entangle: Physics and the Artistic Imagination’, ran from November 2018 – April 2019 at the Bildmusseet, Umeå, Sweden, capturing how particle physics is inspiring the work of contemporary artists. The project is captured in the book by the same name and edited by Ariane Koek, published by Hatje Cantz Verlag (19 Sept 2019).

Professor Peiris invited colleagues to participate in a collaborative science discussion and captured it on the blackboard. The result was entitled ‘The Quantum Origin of the Universe’. She provides an explanation of the creative impulse behind the work:

“What event gave birth to our universe? The theory of ‘inflation’ might hold the answer. It conjectures that the early universe went through a time of accelerated expansion, ironing out any lumps and bumps to leave it nearly uniform with just very slight irregularities. In fact, its predictions have been startlingly accurate as, over the last decade, we have mapped the universe on the largest scales – and so inflation is now a highly-favoured scenario for the very-early universe. Yet inflation is so powerful that, once unleashed, it might continue indefinitely, ending only inside a few isolated ‘bubbles’; our own universe would then be contained within one of these rare patches. Looking back in time from within the bubble, we see the beginning of the universe as a mysterious ‘Big Bang’ event. We could uncover more about what that event means if we can understand the physics of the bubble formation. In order to shed light on the originating event of the cosmos itself requires understanding the quantum nucleation event — for which current techniques are not adequate.”

“The blackboard depicts the conception of a collaboration aiming to answer these difficult questions. The collaborators involved include (other than myself) Jonathan Braden and Andrew Pontzen at UCL, Silke Weinfurtner at the University of Nottingham, and Matt Johnson at the Perimeter Institute in Canada. It is one of the most wide-ranging and enjoyable collaborations of my career so far, and has led us to try to gain further understanding of the origin of the Universe by means of studying analogue condensed matter systems that can be built in the lab.”

Images from the exhibition 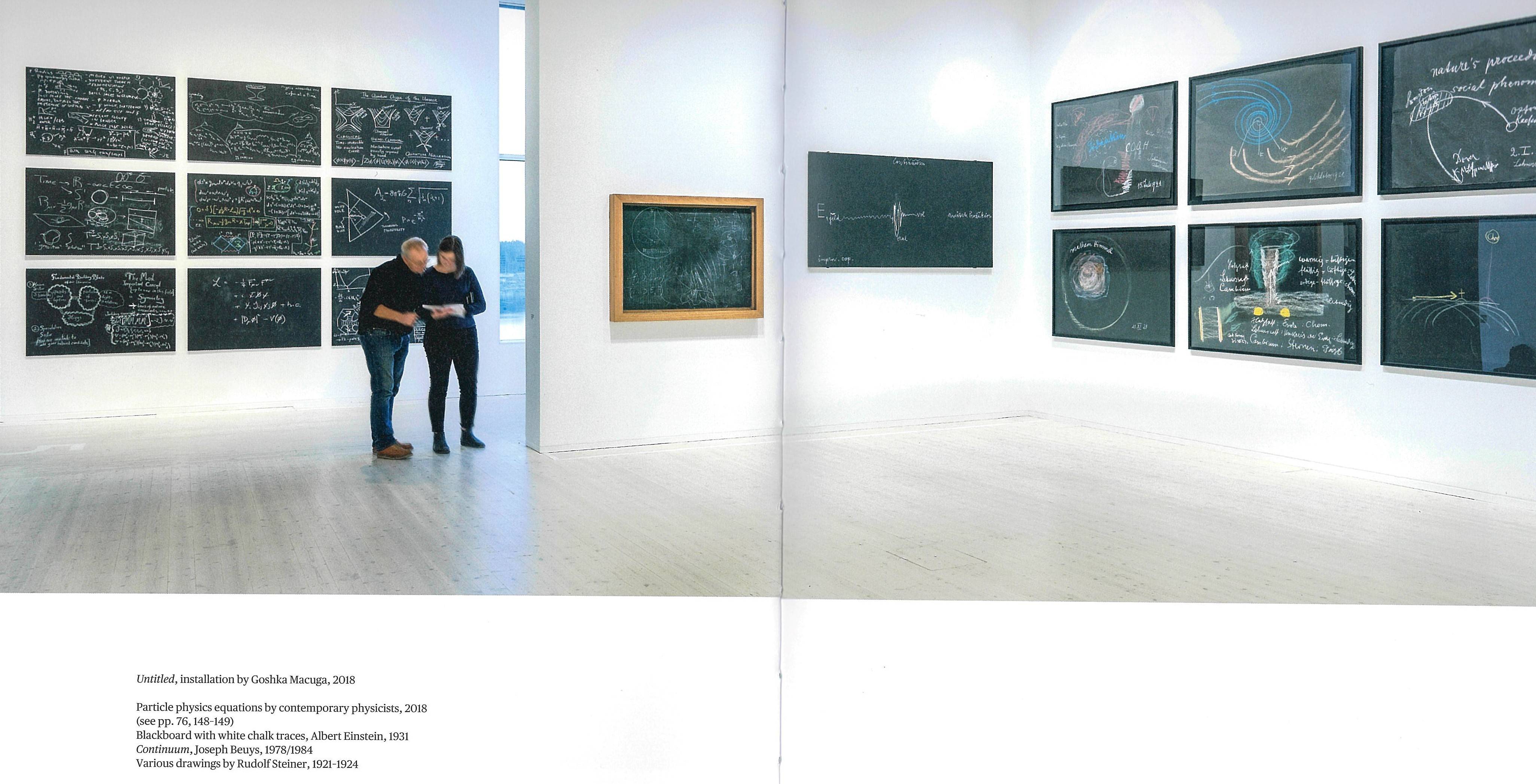 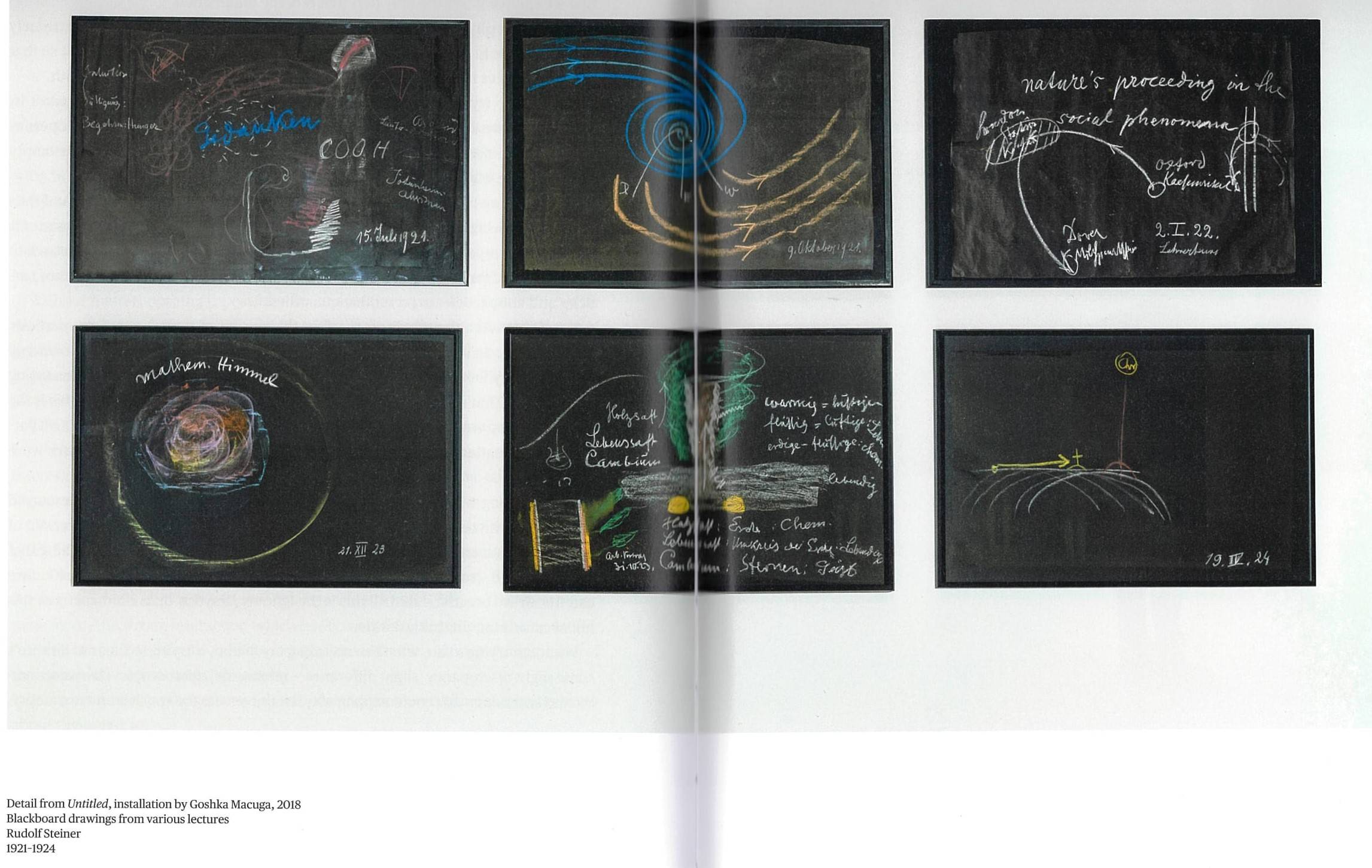 View the exhibition online: ENTANGLE / PHYSICS AND THE ARTISTIC IMAGINATION