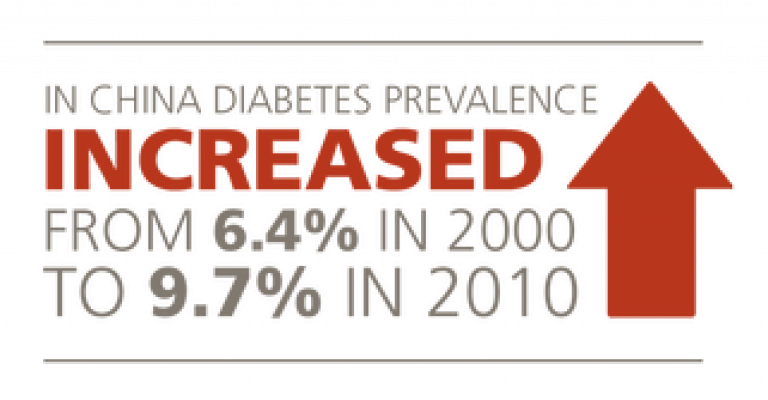 The two cities are the first Chinese cities to join the initiative, joining Houston, Texas, which joined the imitative earlier this month, along with Mexico City and Copenhagen, both of which joined earlier this year.

Infographic showing increase in diabetes in China in recent years.  The Tianjin Medical Association and the Shanghai Diabetes Institute will lead the initial research for Cities Changing Diabetes in collaboration with David Napier, Professor of Medical Anthropology at UCL and Director of the university's Science, Medicine and Society Network. He has designed the research framework for the programme, facilitated by UCL Consultants. UCL is the global academic partner for the programme.

The aim of Cities Changing Diabetes is to map the problem in selected urban areas, to share learning and solutions and to drive action to fight the diabetes challenge in cities across the world. The programme seeks to understand the root causes behind the rise in Type 2 diabetes in cities and use that knowledge to share and recommend effective interventions. Today, nearly two-thirds of all people with diabetes live in cities, and people who move to cities have a significantly higher risk of developing type 2 diabetes than those who remain in rural settings.

"I am confident the city of Tianjin will benefit significantly in the fight against type 2 diabetes by participating in Cities Changing Diabetes" added Mr. Xiong Zhi, Secretary General of the Tianjin Medical Association.

Founded in 1826, UCL was the first English university established after Oxford and Cambridge, the first to admit students regardless of race, class, religion or gender, and the first to provide systematic teaching of law, architecture and medicine. We are among the world's top universities, as reflected by performance in a range of international rankings and tables. UCL currently has 27,000 students from almost 140 countries, and around 11,000 employees. Our annual turnover is nearly £1 billion.

UCLC is a wholly owned subsidiary of UCL and one of the UK's leading providers of academic consultancy services.  We are the gateway for external organisations to access the world class academic expertise and research facilities of UCL, through our services in Academic Consultancy, Expert Witness, Testing & Analysis and Training & Short Courses.

Headquartered in Denmark, Novo Nordisk is a global healthcare company with 90 years of innovation and leadership in diabetes care. The company also has leading positions within haemophilia care, growth hormone therapy and hormone-replacement therapy. Headquartered in Denmark, Novo Nordisk employs approximately 37,000 employees in 75 countries, and markets its products in more than 180 countries. For more information, visit novonordisk.com

Further details about the Cities Changing Diabetes Programme can be found by clicking here: www.ucl.ac.uk/consultants/uclc-news/UCL_Novo_Nordisk