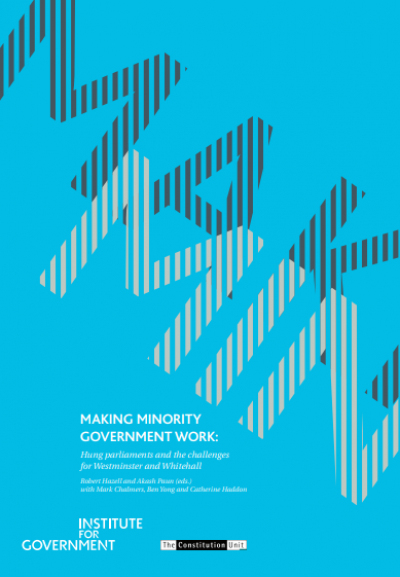 There has been considerable press comment on the possibility of a hung parliament after the next general election. A new report by the Constitution Unit and the Institute for Government considers the implications for MPs, Whitehall and the general public. It concludes that Westminster and Whitehall are unprepared, and that minority government is more likely than coalition. "We are seriously underprepared for the possibility of a hung parliament after the next election," warns Sir Michael Bichard, Executive Director of the Institute for Government. "Westminster and the wider public traditionally perceive minority government as weak, short and unstable, but it need not be that way." The report, Making Minority Government Work, shows how minority government can work effectively in the interests of good government and a stronger Parliament. It draws on lessons from New Zealand and Canada - and from the SNP minority government in Scotland. "Minority government could work at Westminster too," says Professor Robert Hazell. "But everyone would need to raise their game - government, the parties, the civil service and the media." Making Minority Government Work (105 pp.) was published in December 2009 and is the output of a 9-month comparative study based on an extensive analysis of secondary literature, parliamentary proceedings, government documents and media coverage complemented by a series of interviews with government officials, academics and commentators from the four political systems examined. The main lessons from the report include:

Submission to the Political and Constitutional Reform Committee 10 October 2010