The Unit has begun a short project examining the role of government lawyers: what do they do, and what is the nature of their influence in Whitehall?

In determining the appropriate and legal scope of executive action, lawyers and academics have mostly concerned themselves with what the courts say and do. But there are a group of actors within the Executive who may also have a role in determining the scope and legality of government action: government lawyers.

We wish to know:

Nat Le Roux, Chairman of the Constitution Society, has agreed to provide funding for this scoping project. The project will run from December 2012 to May 2013, and is led by Dr Ben Yong. The key proposed outputs are a final report, and a broader research proposal (to be submitted to a research council for further funding). 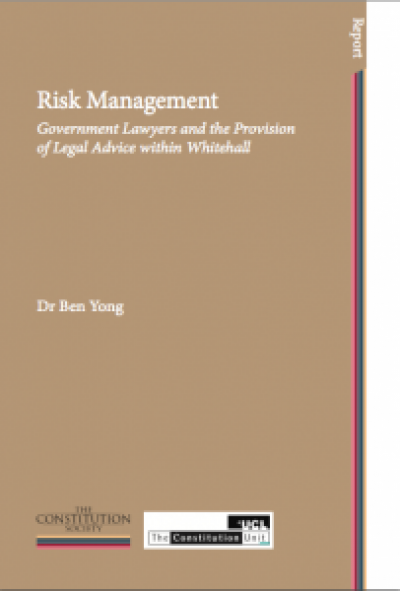 The Constitution Society, in partnership with the Constitution Unit, is pleased to announce the launch of the new pamphlet Risk Management: Government Lawyers and the Provision of Legal Advice within Whitehall.

Written by the Constitution Unit's Dr Ben Yong, the report looks into the important role that legal advice plays in the British political system. To see an interview with Dr Yong marking the launch of the report this week click here.

Government on the blog

Reliance on secondary legislation has resulted in significant problems: it is time to rethink how such laws are created

The Fixed-term Parliaments Act did not cause the Brexit impasse

Parliament has the right to reverse judicial decisions, but governments must be careful not to undermine the important role the courts play as a check and balance in our unwritten constitution

Post-truth – and post-conservative? How Boris Johnson’s Conservative Party poses a threat to the quality of our democracy

Ministerial standards in Westminster and beyond

The anatomy of democratic backsliding: could it happen here?

The public appointments system is under strain: it needs more clarity and transparency