Research into the form that a constitutional convention might best take.

The idea that the UK needs some form of constitutional convention to consider a range of possible reform issues rose high up the political agenda following the Scottish independence referendum in 2014 and has remained there ever since. This attention is driven by the widely perceived need both to address contentious constitutional issues such as those relating to Brexit and the future of the Union should best be resolved, and to engage citizens more deeply in politics and decision-making.

Published in 2017, the Blueprint for a UK Constitutional Convention report looks at many questions relating to the establishment and running of a constitutional convention, such as: What form should a body designed to deliberate on constitutional options take? Would the traditional model of a commission of the great and the good be appropriate? Should a body encompassing representatives of civil society as well as politicians be considered? Or would a more genuinely inclusive assembly - including ordinary members of the public - be a better way forward? If the last, what form should this take?

This project, led by Alan Renwick and Robert Hazell, explored these questions. 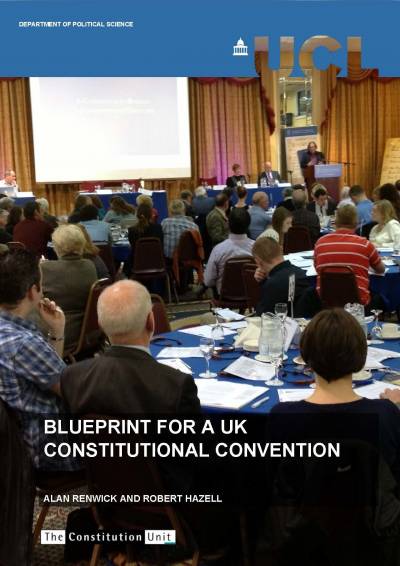 Despite frequent calls for some form of citizen-led constitutional convention, there has been limited detailed thinking about the form that such a body should take. This report examines the issues, explores the lessons to be learned from similar exercises elsewhere, and identifies the pitfalls to be avoided. It sets out a blueprint for a citizens' constitutional convention in the UK.

Protecting constitutional principles: what are they and why do they matter?

What happened to the Constitution, Democracy and Rights Commission?

A Scottish constitution: should it be devised before or after independence?