UCL MotionInput, now in its 3rd generation, is a major software package launched globally for touchless computer interactions of nearly all ranges of human movement using just a webcam and PC.

The platform allows users to control and interact with a computer using physical gestures captured by their web camera. It replaces input functionality normally provided with a keyboard, mouse or joypad, and instead uses movements of their hands, head, eyes, mouth, or even their full body joints.

UCL MotionInput was first created in response to the global COVID-19 pandemic.

As lockdown forced staff and students away from campus, UCL launched a range of initiatives to make teaching remotely work for all. In particular, UCL began conversations with the UK’s NHS, Intel, Microsoft and IBM about possible additions for the NEWS2 protocol, a system used by the NHS to triage patients quickly, but required physical touch and examination.

At the same time, Machine Learning technologies such as Tensorflow, and Computer Vision techniques such as Convolutional Neural Network (CNN) Training models were accelerating in their development.

This led to UCL MotionInput being proposed as a final year project, through UCL Computer Science’s Industry Exchange Network (IXN), in September 2020.

How has MotionInput been developed?

The project was then taken over by a group of Computer Science MSc students (see Microsoft article below), leading to the release of MotionInput V2, which redeveloped and expanded functionality to 4 modes-of-interaction, including hands, full body, eyes and head. Surgical gloves were no longer needed.

Individual modes of interactions were designed, and demonstrated to Microsoft Windows 11 team designers and engineers.

The 3rd generation of MotionInput now enables a wide range of combinations of human movements, also with federated and offline speech processing for live captioning and speech commands, for existing applications. It has several orders of magnitude improvements in efficiency and has an architecture for the supporting growth of touchless computing apps as an ecosystem. It is also starting the journey towards building for multiple platforms.

What are the benefits?

The software has many features and benefits.

Any screen is now a multi-touch touchscreen

Multi-touch touchscreens can be used anywhere, in schools and hospitals as well as at home.

A lecturer can control PowerPoint without reaching for the laptop. A chef can navigate pages without touching the screen. A surgeon can review and annotate CT scan images, without needing assistance to navigate the computer.

Facial navigation enables a greater degree of accessibility by letting a user navigate either with their nose, if they have spinal conditions, or with their eyes for more serious conditions.

The user can mix this with various keywords and customise their own applications with shortcut phrases.

For example, saying “click”, “right click” and “double click” does those actions. The same can be triggered by using facial features such as smiling, raising an eyebrow or opening the mouth.

VR without the VR

It enables you to control your existing Windows games by movements and speech, either by mimicking your game control pad with your two hands, or by setting hit targets to hit in the space around you.

It puts you into your games, where you can walk on the spot as your game character to move and respond with actions within your games.

For industrial settings, it will let you type in a virtual keyboard, or draw and annotate with digital inking and depth, in the air.

It can let users make use of live captioning and call out phrases for keyboard shortcuts, in any existing Windows applications and games. The phrases can be defined by the user.

Who is involved in the project? 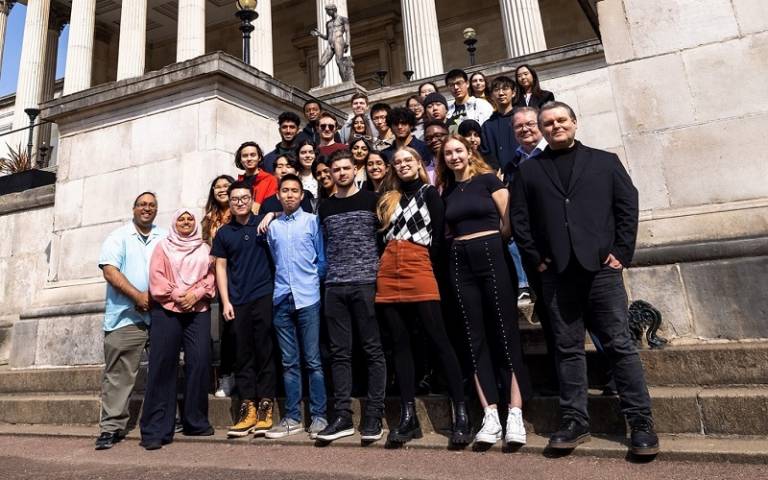 The industry clients are:

Senior directors, engineers, designers, and testers from Intel, IBM, Microsoft, Google and the NHS (including GOSH DRIVE) have participated in the two years of development at various stages with the students, engaging them, enabling them to present their findings and giving them feedback to refine the solutions in the project.

54 students across undergraduate and postgraduate programmes and year groups became the first Touchless Computing group at UCL Computer Science to contribute to this project:

The software for Windows can be freely accessed from the download page.

Students develop software that could revolutionise computer use for millions

Touchless computing for everyone | BCS