A project of the UCL Climate Action Unit, Chatham House, and Fast Familiar.

Policy pathways is an interactive scenario tool to explore the different economic policy levers decision makers can use to accelerate the transition to net zero.

The tool was developed by the Climate Action Unit and the digital studio Fast Familiar ahead of COP26 in November 2021. Since COP26 we have taken this tool to expert audiences internationally.

One of our aims is to gather insights about what people working on climate change think of the policy options currently available, and to evaluate how decision-making skills are applied in a near-reality scenario for the energy system.

The simulation sets up a concrete context in which people participate in a ‘problem-solving’ mindset, rather than defaulting to ‘critiquing’ mode. In doing so, Policy Pathways offers experts a virtual policy gym: a place to practice pulling policy levers in a real-world context

Entering the simulation via an online platform, participants join the Climate Strategy Advisory Board to a new Prime Minister who has been elected on the promise of delivering immediate climate action.

The first task of the panel is to advise the PM on how to make a large-scale clean energy park a reality. Participants receive information through video clips, expert testimony, and written memos from the Prime Minister’s office. They are then asked to discuss and decide on the efficacy of suggested spending, taxation and regulatory policies to support the delivery of the clean energy park.

At several points through the simulation, participants rank the available policy levers in order of preference, before making a final reccomendation to the Minister. 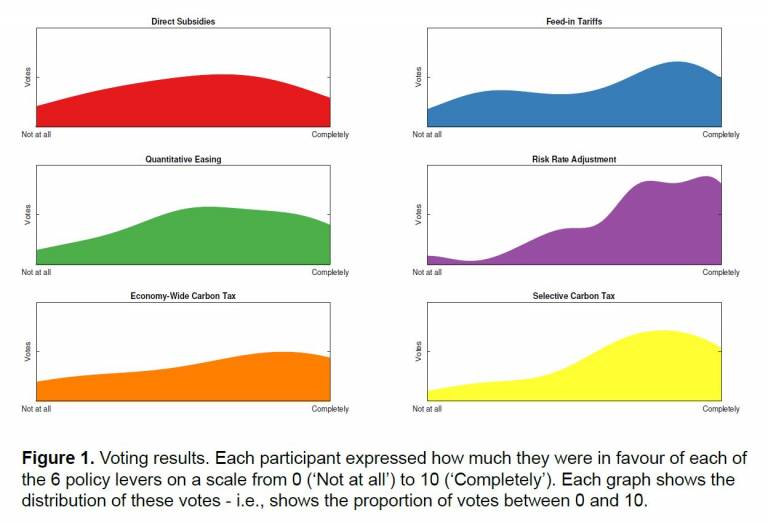 The simulated clean energy park does not yet exist but projects like it are set to become reality in the next five to ten years. In sun- and wind-rich places like Australia, Qatar and Saudi-Arabia, plans are being drawn up (and partially underway) to build large-scale solar- and wind energy parks, with on-site electrolyser plants to produce ‘green hydrogen’. The hydrogen is transformed into ammonia, a carbon-neutral energy carrier which can be stored and shipped around the world like natural gas.

At 25-50GW of combined solar and wind capacity, these integrated energy parks are 10-100 times larger than the current largest renewable installations. Though they might seem mind-boggling by today’s standards, these kinds of projects must become reality in order to decarbonise the global energy system. They will be crucial in pushing the production of renewable electricity to oil and gas scale, and making the electricity easily transportable (in the form of ammonia as the energy carrier) from places where it will be cheap to produce to places where it would be more expensive.

To find out more about the participant experience of the online platform, the scenario participants engage with, and for a discussion of the benefits of practicing policy-making, you can:

Policy Pathways was developed as part of a wider project with Chatham House. The Climate Action Unit co-produced a number of workshops with international policymakers which led to the production of two major reports: