Our lecturers cover all major aspects of the study of Greek and Latin language and literature and its reception. We are passionate about the ancient world. Learn more about our interests.

Aristotle begins one of his most important works, the Metaphysics, with the famous thesis that all humans by nature desire to understand. The fact that we take pleasure in seeing for its own sake, he thinks, is a sign of this natural desire, because seeing reveals to us the different aspects of the world that surrounds us and thereby fosters knowledge. He also argues that when we fulfil our desire to understand and contemplate the highest principles of science, we reach a godlike state of flourishing and happiness. These theses support one of the most fascinating insights of Aristotelian philosophy, i.e. the view that the value of knowledge can be seen both in everyday perceptual encounters and in the highest intellectual achievements.

A short walk from the Department of Greek and Latin, a marble relief in the British Museum depicts Homer being worshipped with divine honours. The work is signed by the artist Archelaos of Priene, and may have been sculpted in Egypt in the third century BCE to celebrate a contemporary poet, who is depicted in the right margin of the relief, perhaps after a victory in a poetic contest.

The scene has been identified as a Homereion, or shrine to Homer; several of these are attested, including one founded by Ptolemy IV Philopator at Alexandria (Aelian, Variae Historiae 13.22). Zeus presides over the scene from his Olympian throne in the upper register or section. Beneath him are Apollo, Mnêmosynê (Memory) and the nine Muses. Homer is seated (bottom left) in a Zeus-like posture, holding a sceptre and a scroll, and is crowned with a wreath by two figures who are labelled as Chronos (Time) and Oikoumenê (the Universe), implying that Homer’s poems will pervade the whole world for all eternity. He is being honoured by figures including (scholars believe) the Iliad, the Odyssey, tragedy and comedy.

The relief powerfully expresses Homer’s godlike status and poetic primacy in the ancient world, which is paralleled in many other sources. Through visual allegory, the work suggests that he inspired all later literary genres in Greek and Latin – epic, lyric, drama, philosophy, historiography – and he continued to do so long after this relief was made. In the modern era, painters such as Ingres and Dali produced artistic responses to the work.

The cultural politics of the artefact and its provenance are also fascinating. An Ionian Greek artist, possibly working in Egypt, honours a Greek poet of disputed origin, but thought to have been from the eastern Mediterranean. The relief was found in Italy in the seventeenth century and is now in the British Museum. These displacements attest to the cultural and economic connections that existed across the ancient Mediterranean, and are typical of how we come to possess the works that survive to this day. 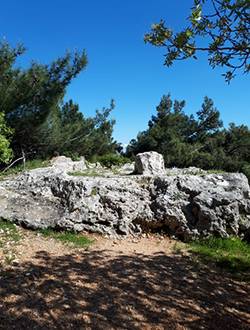 One of the most inspiring places that had a vivid impact on my imagination as a child is the archaeological site of the temple of Cybele known as Daskalopetra on the Greek island of Chios. Already in antiquity, the island was one of the seven candidates for the birthplace of Homer and the site of Daskalopetra (or The Teacher’s Rock or The School of Homer) has been linked to the poet in the folkloric imagination and the Homeric tradition, especially because of its famous rock on which according to legend, Homer recited his epic songs the Iliad and the Odyssey to his students or followers known as Homeridae. Many explorers already from 1880 describe the site as the most beautiful, the most poetic and the most magical place of the island. Some historians believe that the legend was created by the Genovese conquerors of the island (14th – 16th century) and that on this site there was a villa that belonged to Andreo Banca Justiniani with the name “Villa Homerica.” The site provides the visitor with a unique view of Ionia and the Aegean Sea, whilst close by there is an imposing mountain called Epos (‘Epic’ or ‘Word’). My most magical memory is when a few years ago we hosted a public reading of the Iliad and the Odyssey which lasted from evening to dawn. We read all through the night, and when day broke, the 100+ readers experienced the real feeling of “rosy-fingered dawn.” Anyone who visits Chios should take the time to see this amazing site and feel the bewitching power of Homer, the poet of all poets.
Gesine Manuwald 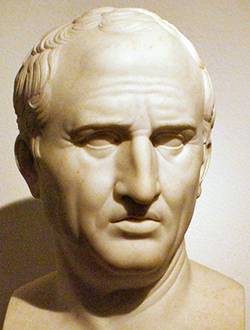 My research focuses on Marcus Tullius Cicero, the late Republican orator and politician. I am not sure whether I would have liked to have Cicero as my best friend, but I admire his cleverness to present any situation as something advantageous for him and to persuade audiences to follow his policies. I enjoy analysing the strategies he employs. And I feel that this kind of work not only tells us something about how political and public life operated in ancient Rome, but also turns us into more alert recipients of pronouncements of contemporary politicians since one has learned to look out for the sophisticated deployment of rhetorical techniques for political ends.
Mairéad McAuley

My interest in Ancient Rome was probably first sparked by the Asterix comic books, but it was reading the poet Catullus in the original Latin that made me want to study it:  I hate and I love - why is this so, you ask? I don't know, but I feel it and am crucified!  On the one hand this is a visceral howl of pain; on the other he manages to pack this explosive passion into two disciplined, perfectly-balanced lines of poetry. The way that Catullus leaves his dilemma of love and hate unresolved feels weirdly modern; but his poem also reminds us that modern love itself, as conveyed in songs, in movies, in poetry, has got an ancient history. I now work across a range of authors and genres in Roman literature, from poetry to prose and drama, looking in particular at their representation of gender, emotions and the body. Studying these topics in Roman texts involves a careful examination of similarities and differences between Roman ways of thinking and ours: on the one hand we experience an exhilarating sense of human connection and even empathy with the past; on the other, attending to the differences jolts us into new way of thinking, especially about the present.

In 1563, in Brentwood, Essex - now just outside the M25, and famous mostly for The Only Way is Essex - a local teacher who had recently moved from London, added another entry to the verse autobiography that he kept on and off throughout his life. On that day, he wrote a poem recording how his wife, going out to the henhouse, and putting her hand in to the warm nest to feel for any fresh eggs, was startled by a dormouse who was sheltering in there for the warmth. She screamed; her husband and a neighbour came running, afraid she was seriously hurt - to find only the dormouse, who I’m afraid comes to a sticky end. This engaging poem conveys a strong sense of domestic life in the mid-sixteenth century and draws on traditional elements of beast fable such as Aesop; it is one of an astonishing 461 poems that this man, Adrian Shell, later Rector of Higham in north Essex, wrote chronicling both his own life - such as the courtship of his wife - and the life of the nation, including the return to Protestantism with the accession of Elizabeth I, and a visit of the Queen to Essex in 1568. But Adrian wrote none of his poems in English: all of them, the whole story of his life, including also poems addressed to him by friends, neighbours and pupils, are in Latin - mostly in elegiac couplets, with a handful in hexameters or in sapphic stanzas.

Adrian's choice of Latin is not an eccentricity: thousands and thousands of Latin works written in early modern England survive, but this enormous corpus of material has barely been studied. Adrian’s poems are now at Corpus Christi College Oxford (MS 324), but none have been published, or even described, before, despite their obvious political as well as human interest - Adrian was probably originally a Protestant émigré from Germany. This is just one of the manuscripts that the project I am working on has looked at, as we attempt to survey and describe for the first time how contemporary Latin poetry was read, written and circulated in early modern England. You can read more about the project here.

The field of early modern Latin (sometimes called 'neo-Latin’) is one of the most exciting areas of research I can imagine: a field in which, if you have good Latin and an interest in and enthusiasm for early modern history or literature, you can work literally every day on material that has received no previous attention. Precisely because so little of this material has been transcribed or translated before, anyone who wants to work in the field needs excellent Latin, and by far the best way to gain good Latin is by a rigorous undergraduate degree in Classics, with a strong emphasis upon text and language work, like the one we offer at UCL. This is, if anything, even more useful for anyone working in the medieval period. So even if - like me - you are more interested in and engaged by later periods than you are in classical antiquity itself, a first degree in Classics is an invaluable starting point for the study of so many other times and places. If you are particularly interested in the study of Latin after antiquity, do please feel free to be in touch at v.moul@ucl.ac.uk.

For me, Latin poetry provides the pleasure of beautiful images and sounds, but it can also provide confidence and consolation. The last poem of Horace's three-book collection of lyrics opens with a resounding proclamation of deathlessness. Here is the twenty-first century translation by the American scholar and poet John Hollander:

More enduring than bronze now is this monument
I have made, one to reach over the Pyramids’
regal heaps, one that no greedy devouring rain,
that no blustering north wind nor the run of long
years unnumbered nor ages’ flight can ruin. I’ll not
die entirely, some principal part of me
yet evading the great Goddess of Burials.

Great poetry is an eternal monument to its author. It is immaterial and therefore cannot be worn away. It is a timeless epitaph for its poet who, through it, does not die - not least because he is still being read by us. But you don’t have to be a poet or a classicist to be moved by these words. My own mother (a psychologist) always took considerable interest in my Latin studies and found the Horatian aphorism non omnis moriar (‘I’ll not die entirely’) a perfect condensation of our family’s somewhat humbler aspirations to leave some small legacy behind us when we die: plant a tree, write a book, have a child. Non omnis moriar appealed to her, to me for her and, now, to me for my daughter. In his painting on this theme, the contemporary Polish artist Aleksander Korczak captures a sense of the consolation art can provide us for the brevity of our lives.

10 reasons to study with us

Find out why we think you should study with us.

Contact details for staff can be found on our People page.

The UCL Classics Society is a student society run by annually elected students. It is a small department-affiliated society. We arrange various social and academic events throughout the year including talks, museum trips and nights out, as well as a Christmas dinner and an end of year ball. Find out more using the link below.