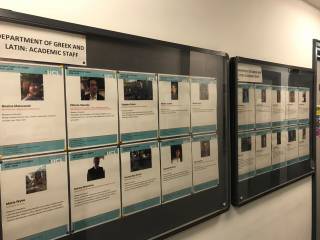 Greek historiography and ethnography; identity; the politics of representation.

Early modern Latin and English poetry; lyric poetry in Latin, Greek and English; the reception of classical poetry in early modernity and in literary modernism.

These are a few of our favourite things.

Current students should book meetings via the Moodle Scheduler and any others should email to make an appointment.