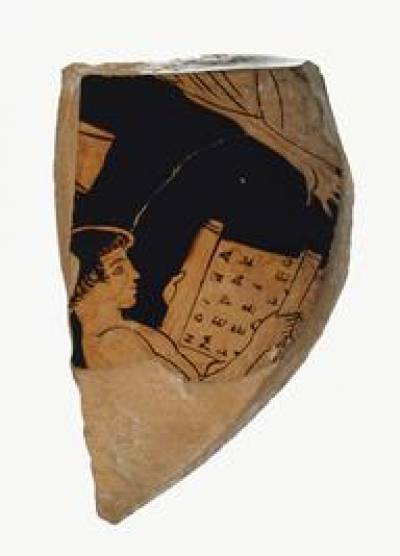 Greek papyri began to arrive in London in the mid-nineteenth century, but papyrology became part of UCL only in 1948, with the appointment of E. G. Turner to a new dedicated post. From the very beginning, the core of UCL papyrology has been research on the Oxyrhynchus papyri, a collaborative project with the University of Oxford.

The basis for the project is the papyrus collection of the Egypt Exploration Society, the largest of its kind globally.

Since the early years, UCL has been a leading centre for the training of students in papyrology: it has fostered more MA and PhD dissertations in papyrology than any other institution worldwide. The MA course has been running for decades; a BA module was added more recently. Most of the past and present graduate students have been involved in the Oxyrhynchus project, mainly through editions of unpublished papyri, literary as well as documentary, and occasionally through the digital publication of texts already available in print.

London's resources for papyrology are superb. The UCL library and that of the ICS contain together practically everything one needs for research in the field, and the British Library adds unparalleled depth.

The leader of papyrological research in the Department of Greek and Latin is Nick Gonis. Colleagues at KCL and RHUL offer further expertise in the history of Hellenistic and Roman Egypt and the digital publication of documentary texts.