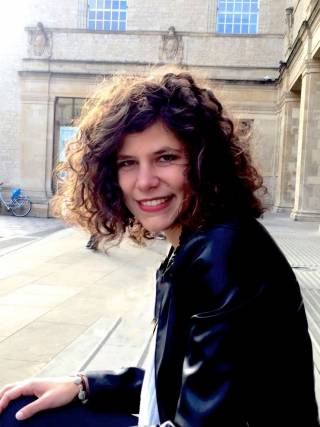 I completed my undergraduate (2012) and Master’s (2014) degrees in Classics at the University of Milan, with a period of study at the University of Notre Dame (Indiana), where I wrote a thesis (now a book) on the reception of Aeschylus’ Seven Against Thebes in the US. I came to the UK in 2015 as a postgraduate student in Classical Languages and Literature at St Hilda’s (Oxford), with a project on the reception of Aeschylus’ tragedies in Italy (1550-1960), supervised by Fiona Macintosh and in collaboration with the APGRD (Oxford). I was lecturer in Classics at St Hilda’s (2017-2019) and St Anne’s (2019-2020) before coming to UCL.

My current postdoctoral research project focuses on early modern translations of ancient Greek drama in Italy (1400-1600). It fills a gap in the history of theatre translation theory and practice, of ancient Greek drama, and of the Italian vernacular and Latin as they both developed through, and were influenced by, translation practice. I am particularly interested in the relationship not just of ancient Greek with Latin and the Italian vernacular, but also between Latin and the vernacular themselves and on how each language impacted on, and influenced, the other (see the forthcoming co-edited volume Translating Greek Drama in the Early Modern Period: Theory and Practice in 14th-16th-century Europe under publications).

I am also interested in the reception of ancient Greek drama in Italy during Fascism and am currently preparing the edition of an unpublished translation of Aeschylus’ Oresteia during Fascism (see the two special issues I am on the topic with Eleftheria Ioannidou and Sara Troiani under publications and the edition of a 1942 manuscript translation of Aeschylus’ Oresteia).

In these years, I have also co-led and organised workshops that link theatre practice with the study and translation of ancient Greek drama, with both Oxford and UCL students as well as professional actors. I am currently part of the research project Translating Ancient Drama at the Archive of Performance of Greek and Roman Drama (Oxford), and responsible for the ‘early modern’ and ‘theatre translation workshops’ sections of the project. I have also been involved in and organised outreach projects on Greek theatre and the ancient world more generally: I am the co-founder and co-leader of the APGRD Blog and APGRD Podcast (2019-present), as well as of UCL Ancient World New Voices podcast series. I acted as Academic Advisor for UCL Odyssey Festival (2021) and Euripides Electra (2022), for which I organised pre-show talks (the recordings of which are now available online), theatre workshops, living archives (browsable on our website), and two study guides on the Odyssey, ancient epic and its reception, and the production and staging of ancient Greek drama, ancient and modern, as well as on Euripides and his reception more specifically.

3-14 October 2022, University of Parma; 23-24 February 2023, UCL: ‘Memory and Performance: Classical Reception in Early Modern Festivals (15th-18th Century)’, co-organised with the University of Parma, and in collaboration with UCL Centre for Early Modern Exchanges, the APGRD (Oxford), and supported by the Leventis Foundation. Link here.

G. Di Martino, The Reception of Aeschylus in Italy: Translation, Performance and Adaptation (under revision).

G. Di Martino, ‘Aeschylus at the Crossroads between ‘Modernities’, in: Performing Ancient Greece in Fascist Italy: Modernism and the Classical in CRJ (OUP) (forthcoming 2022).

G. Di Martino, ‘Archiving and Documenting Classical Performance during and after Fascism’, in: Re-Living the Classical Past: Performative Uses of Antiquity under Fascism, Fascism: Comparative Fascist Studies (forthcoming 2022).