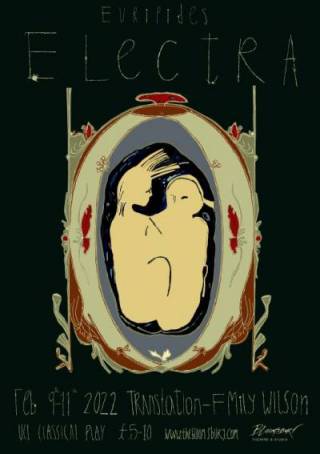 Staging Greek Tragedy: Then and Now

Browse our short series 'Staging Greek Tragedy: Then and Now' in occasion of UCL's 2022 Classical Play (Euripides' Electra, 9-11 February), featuring acclaimed artists and academics being interviewed by this year's production crew on matters concerning the staging of Greek tragedy in ancient and modern times

Episode One: Dramaturgy and Greek Tragedy

Browse our short series 'Staging Greek Tragedy: Then and Now' in occasion of UCL's 2022 Classical Play (Euripides' Electra, 9-11 February), featuring acclaimed artists and academics being interviewed by this year's production crew on matters concerning the staging of Greek tragedy in ancient and modern times.

Productions mentioned in the episode:

On the prehistoric settlement of the Argolid: French, E.B. 2002. Mycenae: Agamemnon's capital: the site in its setting.

Iakovidis, S.E. 1985. Mycenae - Epidaurus: Argos, Tiryns, Nauplion. A complete guide to the museums and archaeological sites of the Argolid.

Kimberly Beaufils' PhD thesis (2000) Beyond the Argo-Polis. A social archaeology of the Argolid in the 6th and early 5th centuries BCE. https://discovery.ucl.ac.uk/id/eprint/10121053/

On the recent archaeological discovery at the theatre at Thouria mentioned in the episode: https://chronique.efa.gr/?kroute=report&id=6526

Link, Franz H. (1980) ‘Translation, Adaptation and Interpretation of Drama Texts’, in O. Zuber (ed.), The Language of Theatre: Problems in the Translation and Transposition of Drama, Oxford.

D’Angour, A. 2018. 'Ancient Greek music: now we finally know what it sounded like', The Conversation <https://theconversation.com/ancient-greek-music-now-we-finally-know-what-it-sounded-like-99895>

Videos and Essays on Euripides' Electra

It’s spring, late fifth century B.C., and you are on the south slopes of the Acropolis with the Parthenon behind you and the roofs of ancient Athens out in front. You are sat outside on curved wooden benches watching a troupe of masked all-male performers move across a circular dance floor, as you drink in a performance that boasts no curtains, no lights (the performance takes place during the day) and no amplification. You are watching the debut of Euripides’ Electra as it was first performed in the last decades of the fifth century B.C., part of a dramatic contest between three writers of tragedies, each presenting three plays, part of the religious festival of the Great Dionysia.

How do we know that this is what that world looked like? We could do worse than to look to the archaeological record, a body of evidence that allows us to see the material world that the original audience might have seen: objects, monuments and places that make the ancient texts more tangible. In this blogpost, we will look briefly at a few pieces of evidence that help us to imagine what that first performance might have looked like for Euripides’ audience in Athens —and we will also see some evidence for another world of ancient Greece to which the playwright wanted to transport us.

The Theatre of Dionysos Eleuthereos is a monument that tourists of Athens can visit today. It sits built in to the slopes of the Acropolis hill, using the natural topography to form a tiered seating area that draws the audience’s view towards a central staging area. Today a rather grand theatre with three tiers of stone seating (the theatron area) and a raised platform built at the back of the stage, the monument that visitors see was largely constructed around 350 B.C., enlarged and further monumentalised in the Roman period (and restored and conserved in various sections in the twentieth and twenty-first centuries). The theatre design would have been much simpler in Euripides’ time, however. The tragedy’s action would would have played out on a circular orchestra space, while the seating area for the audience comprised wooden benches, ikria, the scaffolding posts from which slotted into postholes that have been found on the south-slopes. Behind the orchestra, it is likely that a permanent stone stage building, the skene, was erected some time around the second half of the fifth century B.C. —so perhaps in place by the time that Electra was performed. This building had stone foundations, plastered brick walls, and it could be dressed with scenery to enrich the audience’s view and to help transport their minds elsewhere.

Recent archaeological discoveries are helping to enrich our understanding of ancient theatres. In 2016, Xeni Arapogianni of the Athens Archaeological Society began excavating an ancient theatre at the site of Thouria in Messenia. This structure dates a little after Euripides’ time to the fourth or third century B.C., but its construction is useful nonetheless for telling us more about how dramatic texts might have been performed in antiquity. Initial excavation concentrated on exposing the diameter of the orchestra (and investigating a two-storey workshop that had been built right in its centre, a reuse of space once the theatre had fallen out of use!), but at the end of the 2017 excavation period a clue came to light about how performances could have been staged here. Namely, stone channels were found just in front of the skene along which painted scenery pieces could have been rolled in and out: one can almost imagine the chorus of a play like Euripides’ Electra waltzing in and pulling in or out of view a decorated backdrop, helping the audience to ‘see’ a new place or image. The innovation of the stone channels is shared by the neighbouring theatre at Messene, and also east across the Taygetos mountain range at Sparta.

So much for the theatres that the Euripides' audience would have sat in —where did he want to take them?

The action of Electra takes place in the Argolid region of Greece, an area in the north-east area of the Peloponnese, just across the Saronic Gulf and west from Athens. This is a fairly dry and arid region of Greece —Homer calls it ‘very thirsty’— and it is only through a complex mechanical irrigation system that the region today has become a modest producer of citrus fruits, tomatoes and corn. The wide plain of Argos (in the middle of which the modern city lies, the same location as the ancient city) rolled out to the sea at the Argolic Gulf, and  it was itself enclosed by hills on all sides.

Little is known archaeologically about Classical Argos, about the city that would have stood contemporary with Euripides’ play. The École Française d’Athènes has conducted excavations but, with a modern city right on top of the ancient, only small fragments have come to light, principally monuments from Roman period Argos. A medieval castle on the city’s hill of Larisa and a circuit of walls are thought to have been placed on top of classical monuments, and there would also have been rather grand gates leading into the city. What we know more about, however, (and perhaps more useful for thinking about Euripides’ text which asks his audience to look back to a ‘heroic’ past of Greece) is prehistoric Argos. On top of the Aspis hill, remains have been located of a fortified hilltop settlement. And just across the plain, too, more Bronze Age fortified settlements at Mycenae and Tiryns, ‘palaces’ enclosed by fantastic ‘Cyclopean’ walls whose defences would have been almost impossible to breach. Is this the sort of picture that Euripides wants us to have in our minds when he tells us about the palace that Clytemnestra inhabits, the doors of which are closed and unreachable, keeping Electra far away in the harsh and arid plain?

One reference to place in particular would have had special significance to Euripides’ audience in Athens. When the Dioskouroi enter the stage during its final moments deus ex machina, they instruct Orestes to go to Athens, to embrace the statue of Pallas Athena, and to stand trial at the Hill of Ares in order to cleanse himself of the bloodshed of his mother. The Hill of Ares, the Areopagos, stood a mere stone’s throw away from the Theatre of Dionysos, also on the slopes of the Acropolis and round to the west, boasting a proud view out across the Pnyx and the Agora, the heart of classical Athens and its legal processes. The Areopagos, although little more than just a meeting point for a council of high-ranking officials to take a decision in serious cases of murder and homicide, also had at its feet a small temple of the Erinyes (Furies), goddesses of vengeance and retribution. In some senses, by bringing Orestes to Athens at the end of the play right up-close to the audience, he was empowering that audience to be the jurors to this character, inviting them to start a conversation with one another: were Orestes’ actions in killing his mother just, and does he deserve for the council of the Areopagos to acquit him?

So not just challenges but possibilities are given by the use of space and real places in Euripides’ text. Euripides would have known well the space in which his words would be performed, and whether or not he wanted to use this opportunity to take his audience to other real or imagined places was all part of his stagecraft. That same challenge of negotiating imagined space and real place exists for any creative team staging a place like this, and I look forward to seeing how the 2022 UCL Greek Play team engage with that possibility. 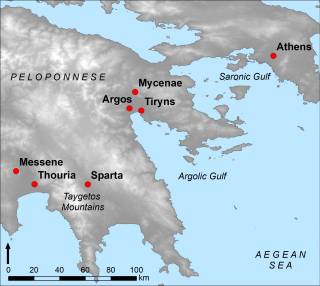 Fig. 1: Map of places mentioned in this blogpost. (produced by Michael Loy) 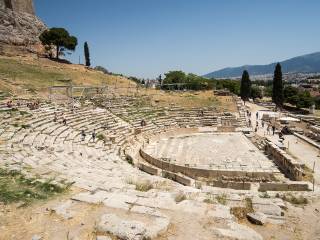 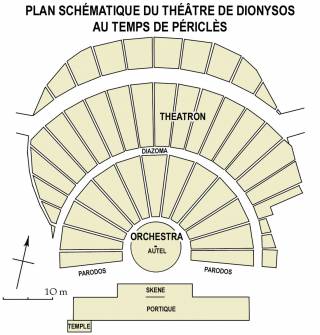 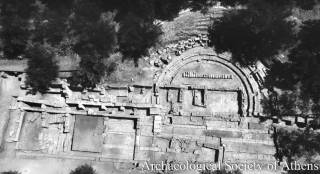 4. Aerial view of the fourth/third century B.C. theatre at Thouria, taken after the completion of the 2019 excavation season. (Archaeological Society of Athens, Ergon (2019), 25-29) 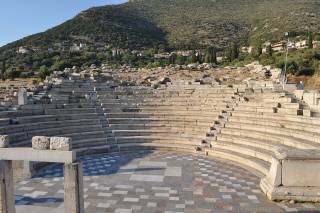 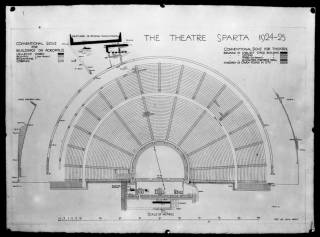 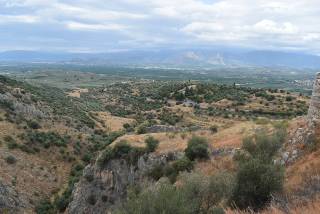 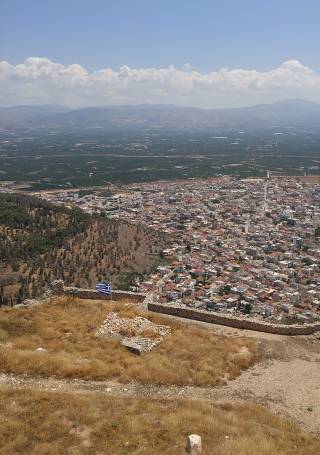 8. View towards modern-day Argos from Larisa castle, where supposedly there would have been a classical Acropolis. (View towards Argos from Larisa castle (Acropolis of Argos, Argos castle, 2017), Gregor Hagedorn, CC BY-SA 4.0, Wikimedia Commons, <https://commons.wikimedia.org/wiki/File:View_towards_Argos_from_Larisa_castle_(Acropolis_of_Argos,_Argos_castle,_2017).jpg>) 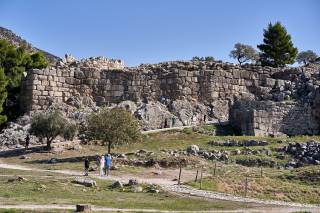 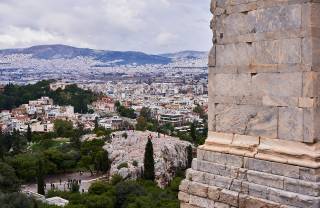 1. What are the challenges for staging an ancient production of Greek tragedy posed by the physical layout of an ancient theatre?

2. Euripides’ Electra is set in Argos, but many other places are mentioned in the text (Troy, Mycenae, Phokis, Euboea). How important is it that an ancient or modern audience knows what these places look like, and where they are?

3. Could a production of Electra be staged in an entirely fictional ‘non-place’? What would be lost or gained?

4. Think about other plays of Euripides’ that you have read. Does the poet use space and place in the same way as he does in the Electra?

5. To what extent do you think Euripides’ Argos was inspired by the world of prehistoric Greece?

Iakovidis, S.E. 1985. Mycenae - Epidaurus : Argos, Tiryns, Nauplion. A complete guide to the museums and archaeological sites of the Argolid.

Kimberly Beaufils' PhD thesis (2000) ‘Beyond the Argo-Polis. A social archaeology of the Argolid in the 6th and early 5th centuries BCE.’ https://discovery.ucl.ac.uk/id/eprint/10121053/

Papathanassopoulos, T. 1995. The sanctuary and theatre of Dionysos : monuments on the south slope of the Acropolis.

The theatre at Thouria is published in Greek, but English language summary reports for each of the excavation seasons 2016–2020 are available here: