The myth of Hippolytus had many manifestations across the Mediterranean, with the same essential facts: a married woman becomes sexually obsessed with a younger man, and, when spurned, she responds to his rejection with persecution and retaliation (typically by accusing him of rape to her husband). The Greeks had several such stories: the sixth book of Iliad recounts how the hero Bellerophon was pursued by his host's wife, Stheneboea, whereas the myths surrounding Peleus, Achilles' father, similarly narrate how in his youth he was sought after by Astydamia, who became bitter after he scorned her advances. In Judaeo-Christian tradition we also find similar analogues, such as the story of Potiphar's wife, who lusted after Joseph, which is recounted in the book of Genesis.

The Greek myth of Hippolytus likewise tells of the love of a married woman for a single man, but a crucial difference: the woman is now his stepmother, married to the young man's father. This small alteration now suffuses this canonical story with quasi-incestuous connotations. Equally disconcerting are the finer details of this myth: the woman, Phaedra, comes from a long line of 'troubled' Cretan women, who were notorious in the ancient world for their illicit passions (she is, for example, the daughter of Pasiphaë, who developed a monstrous fancy for a bull, which subsequently produced the Minotaur). The husband is Theseus, one of the most famous and well-connected Athenian mythic heroes, who like Heracles and Perseus boasted both a divine and a mortal father. The young man is the son of an Amazon queen, whose people were famous for their untamed and warlike nature.

In many ways, this brief sketch of Hippolytus, Phaedra, and Theseus illustrates that the ingredients of a great tragedy are already in place, ones which furthermore guarantees disastrous consequences: we have Athens' greatest hero who is frequently absent due to his various exploits, a woman from a line of licentious Cretan women, and young man from a proud and wild race. It is therefore no surprise that this tale was brought to life on the Athenian tragic stage, especially given the recurring fascination in tragedy with women who lusted after men who were not their husbands. Tragedians also had no qualms depicting married women who specifically lusted after young men: Euripides himself dramatized Bellerophon's story in a lost tragedy, Stheneboea, which famously ended with the hero mounted on the winged horse Pegasus.

But what is surprising is that in the fifth century there were not one, but three different tragedies that dramatised the story of Hippolytus and Phaedra: two by Euripides with the title Hippolytus, and a Phaedra by Sophocles. Unfortunately we know very little about Sophocles' play, beyond an assumption that the play must have focused on the experience of Phaedra. Yet with Euripides' two versions of Hippolytus we have the only certain instance of a fifth century tragedian who rewrites one of his plays. In comedy, we know that Aristophanes revised a few of his plays - there were famously two versions of his Clouds, for example. But throughout the fifth century BC all tragedies were performed for a single performance in Athens, and it is only in the fourth century that revivals of the 'classics' began. In other words, the spectators of 428 BC (who saw the second and only surviving version, the play we now possess) had a special treat in store, witnessing what is perhaps the only second treatment of the same myth by the same tragic playwright.

Though we only have a few extant fragments of the original Hippolytus, we know from this and other evidence (e.g. Aristophanes' Frogs 1043) that the play featured a shameless Phaedra, who made a deliberate and bold attempt to seduce Hippolytus, in direct contrast to the virtuous and discreet Phaedra from the version that survives today. Reeling from the shock of being so openly propositioned, Hippolytus appears to have reacted by veiling his head in horror and shame: hence the title, Hippolytus Veiled (Hippolytus Kaluptomenos from the Greek verb kaluptô, 'to cover'). With the second Hippolytus, Euripides therefore set out to do something extraordinary: to redeem and transform the formerly sexually assertive Phaedra into a nobler and more sympathetic figure. Indeed, the second Phaedra actively seeks to repress her illicit passion for Hippolytus, which directly contravenes her ideals of chastity and good reputation. Throughout the play, Phaedra never addresses Hippolytus herself; in fact the symmetrical structure of the play, which is neatly divided into two equal episodes, keeps the two apart as each focalizes on Phaedra's passion and Hippolytus' fight against the false rape charge, respectively.

That Euripides was successful in recasting his heroine (and consequently, his tragedy) is confirmed by the fact that he won one of the four first prizes that he was to win at the City Dionysia during his life. Later generations praised his new version: the famous scholar and head of the Alexandrian library Aristophanes of Byzantium, for example, wrote that the second version corrected what was reprehensible in the first version. But the play's radical refocus is not merely brought about by the change in Phaedra's personality. Rather Euripides effects change through the addition of the gods and the expansion of a minor character's role. The new symmetrical play has a divine frame with Aphrodite delivering the prologue and Artemis appearing as dea ex machina at the play's close. As is made clear at the outset and throughout the play, the goddesses stand on opposite sides against and for Hippolytus, and whose role can be read symbolically as representing different aspects of the world: sexuality and chastity. With the introduction of the gods, the tale of illicit sexual desire is now elevated into a clash of human will and divine power: Phaedra's passion becomes secondary to Aphrodite's vengeance and Hippolytus' rejection of a lustful woman is now an offending slight to a god. Besides adding the gods, Euripides crucially expands the role of the nurse, who was possibly present in the first version but now has the second largest part in the tragedy. She is the shameful intermediary who on her own initiative decides to approach Hippolytus. Given the economy of ancient Greek tragedies, with three actors sharing all the roles between them, the actor who played the nurse would have also previously played the part of Aphrodite, a fact that would have further underscored Phaedra as the unwitting victim of a tragedy over which she had absolutely no control.

Euripides' rewriting of Hippolytus suggests the enduring power of this myth and its ability to assume a variety of effective forms that fascinate audiences ancient and modern. The ancient Greek manifestation of this tale, which features a stepmother in love with her stepson, may have especially resonated in a society in which childbirth was extremely dangerous, and widowers frequently introduced a new wife to stepchildren often no younger than herself (as attested, for example, in Antiphon's Against the Stepmother). At the same time, Euripides' act of self-adaptation additionally tells us something about the functioning of myth in Greek culture more broadly: in ancient Greece, myths were not a static and unchanging story, but rather flexible narratives that could be ceaselessly modified and re-imagined, even by the same author.  (© Dr Rosa Andújar)

Hippolytus and its legacy

Euripides, the third of the great Athenian tragedians, wrote Hippolytus for performance at the City Dionysia in 428 BC, where it won first prize. The characters and events of the ancient Greek tragedy have engendered many imaginative theatrical responses, both in, and after, antiquity.  Its depiction of feminine irrationality and male misogyny have proved extremely provocative, and later versions have all concentrated on the power of human passions by eliminating the divine bookends of Euripides' play.  The first canonical rereading of Euripides' tragedy was Phaedra by the Imperial Roman tragedian Seneca (ca. 4 BC - 65 AD).  Though it follows much the same plot as Euripides' original it is more sympathetic to Phaedra, shifting the blame for the accusation of Hippolytus more on to the nurse and allowing her a chance to explain herself to Theseus before she commits suicide.  In much the same vein was Phèdre, a play by the seventeenth-century French neo-classical playwright Jean Racine (1639-1699).  Racine creates more rounded characters than his two ancient predecessors: for example Hippolytus is not the puritanical young man that he is in Euripides and Seneca, but is actually shown to fall in love with another female character named Aricia. Perhaps the most controversial retelling of Euripides' play has been Phaedra's Love by the short-lived English playwright Sarah Kane (1971-1999).  In this play, which Kane described as her 'comedy, the action is set in a dystopian modernity and, in a reverse of Euripides', Seneca's and Racine's characterisation, Hippolytus is portrayed as a sexually promiscuous prince who uses sex to distract himself from the banality of his existence.  Phaedra's love for him thus becomes all the more irrational, but her suicide initiates a series of events in which Hippolytus is finally able to overcome his boredom and experience true excitement.

1.    Do you think Euripides is fair in his portrayal of Hippolytus and Phaedra?
2.    Who is the main character of his drama: Hippolytus, Phaedra, or Theseus?
3.    Does the appearance of the gods at the start and end of Euripides' play present any difficulties for a modern reader of the play?
4.    Why do you think that Seneca, Racine and Kane all change the title of their adaptations to something to do with Phaedra rather than Hippolytus?
5.    How do the different portrayals of Phaedra's suicide respond to the different times in which these various plays were written? 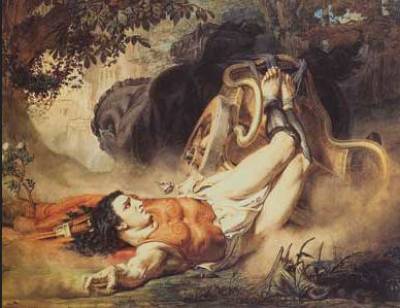