Non-ketotic hyperglycinemia (NKH), or glycine encephalopathy, is a rare, life-limiting inherited metabolic disease characterised by accumulation of excess glycine in the body. The disease becomes apparent soon after birth with lethargy, breathing difficulties and neurological symptoms, including seizures. Affected infants suffer epilepsy and profound delay in development and NKH is often fatal in early childhood.

NKH is an autosomal recessive disease, in which one copy of the affected gene is inherited from each parent. Classic NKH is caused by mutations in GLDC or AMT, genes that encode components of the glycine cleavage system). The majority of children carry mutations in GLDC (glycine decarboxylase) and a broad spectrum of mutations have been identified.

The Glycine Cleavage System (GCS) regulates the abundance of glycine by breaking it down in a reaction localised in mitochondria (Figure 1). Glycine is the smallest amino acid and functions both as a neurotransmitter in the central nervous system and as a precursor in a number of biosynthetic processes including production of proteins and purines (for DNA synthesis). The harmful effects of excess glycine in NKH are thought to result, at least in part, through the action at NMDA and glycine receptors in the CNS. 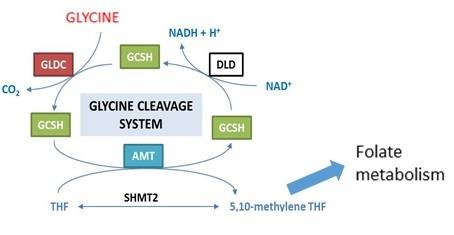 Current treatment for NKH is based on use of sodium benzoate, to lower glycine levels in the body, and management of epilepsy. These treatments do not provide a cure.

Our research aims to better understand the disease process and to develop novel therapies. We using a number of experimental models:

Mouse models of NKH We are currently studying three mouse models that have different mutations in Gldc. This results in 3 main types of abnormality: (i) early defects in pre-natal development of the brain, called termed neural tube defects (NTDs) (note that mutations in GLDC and AMT are also found in some human NTD cases); (ii) hydrocephalus – enlargement of the brain ventricles due to increased pressure of cerebrospinal fluid. Some children with NKH also develop hydrocephalus; (iii) features of NKH [see references for more details].

We also analyse mice carrying one copy of each gene-trap construct (GldcGT1/GT2). They have an intermediate frequency of neural tube defects.

Other experimental models Alongside work with mouse models we are using:

Cellular models (cell lines that have mutations in GLDC) to study the effect of GCS mutations in human cells. Cell lines can be grown in culture (in a dish in the laboratory) and include:

Simple organisms. We are using several models in which GCS gene function is deleted in simple organisms which are amenable to high-throughput screening of potential therapeutics and testing of metabolic abnormalities.

In the various NKH model systems we are:

This work is aimed at informing development of new treatments and to define therapeutic end-points to test whether such treatments are effective. 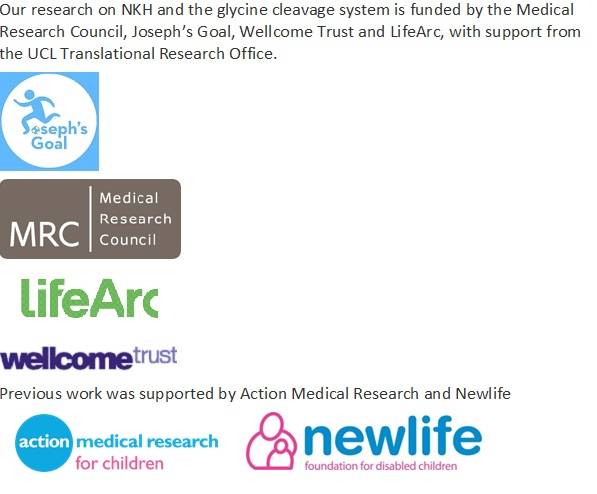 Our Recent Publications on NKH and the Glycine Cleavage System:

This study reports the effect of knocking-out the Gldc gene in zebrafish.

Partitioning of One-Carbon Units in Folate and Methionine Metabolism Is Essential for Neural Tube Closure.

In this study we analysed the function of the glycine cleavage system in providing one-carbon units that are essential for early brain development. This study describes the GldcGT2 model.

Use of high-frequency ultrasound to study the prenatal development of cranial neural tube defects and hydrocephalus in Gldc-deficient mice.

In this study we studied the onset of enlargement of the ventricles that leads to hydrocephalus in the GldcGT1/GT2 model of NKH.

This study describes mice with the GldcGT1. The mice develop NTDs, hydrocephalus and features of NKH, confirming the involvement of this enzyme system in defects of pre-natal and post-natal development of the central nervous system.