Thirty-one Chinese students studying in the United Kingdom were given awards by the Chinese government to recognize their outstanding academic achievements, Yao Lu, a third-year PhD student with Professor Ivan Parkin from our department was one of the well-deserved winners.

The ceremony for the 2015 National Award for Outstanding Self-financed Chinese Students Studying Overseas was held at the Chinese Embassy in London.

On behalf of the embassy, Ambassador Liu Xiaoming congratulated the winners and also expressed gratitude towards their teachers in the UK.  During his speech, Liu called on those honoured to cherish their opportunity to study in the UK and study hard to realize their dreams and make a contribution to China's development.

"This is not only an award or a financial support, but also a glorious honour from our homeland," said Yao Lu.

Established in 2003 by China's Ministry of Education and Ministry of Finance, the award is set up to honour overseas Chinese students with outstanding academic accomplishments. To be eligible for the award, a student must be studying for a PhD degree, be under the age of 40 and be paying for his or her own education.

Majoring in Chemistry, Lu, together with his supervisors and colleagues, has developed a paint that can be treated on almost any solid substrates to make extremely robust super hydrophobic surfaces. The findings were published in the journal Science last year and covered by more than 200 media globally.

Since its establishment, the award has honoured more than 4,900 Chinese students studying overseas. The winners will receive a scholarship of $ 6,000. 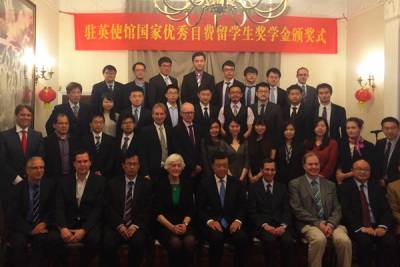