John Holmes, Prof. Emeritus at the University of Ottawa has been in touch to share with us memories of his time in the department from 1954 – 1957.

John Leonard Holmes is an English-born Canadian chemist best known for his work in gas phase thermochemistry.  In particular, his focus on elucidation of ion structures through experimentation and theory has led to a better understanding of ion energetics and reactivity.  Holmes is also well known for the active role he took in shaping the journal Organic Mass Spectrometry as its North American editor over the period 1976-1992. Prof. Holmes was born in London in 1931.  He obtained his PhD in 1957 from University College London, in the chemistry department that boasted such luminaries as Sir Christopher Ingold, Edward Hughes, Sir Ronald Nyholm, and David Craig. 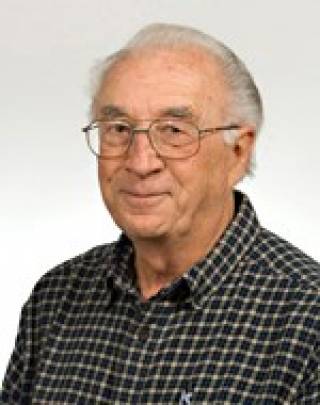 ..was to be the kinetics of the pyrolysis of alkyl iodides. The mechanisms of the alkyl chloride and bromide pyrolyses were well understood by then, the former as uni-molecular eliminations of HCl and the latter as mixed free radical and molecular decompositions producing the alkene and hydrogen bromide. The iodides presented a new problem, because the products were alkene, alkane and iodine in equimolar proportions. Thus the HI produced in the initial pyrolysis was proposed to react rapidly and completely with the alkyl iodide to create the alkane. My first task was then to study the kinetics of this secondary process, using 2-iodopropane plus HI as my example.

The old Ramsey building was dark and smelled faintly of the accumulation of chemicals that had permeated the building over many decades...The undergraduate laboratory floors were made of well-worn wooden planks and had suffered many a spill from the benches above. In the organic and inorganic teaching labs, the drains from the benches emptied into ceramic U-shaped runnels under removable floorboards. If a significant quantity of diethyl ether had gone down the drains, a not uncommon event, an interesting but highly frowned-upon trick, was to ignite the ether in a sink and watch the (actually cool---pour a little into your hand and ignite it) flame rush along under the floor, appearing where gaps in the old boards permitted. If one lifted the boards in these labs, droplets of accumulated mercury could likely be seen. By todays exacting (sometimes neurotic) standards the labs would be declared unsafe, but we all seemed to have survived unscathed.

On graduating Prof. Holmes joined the National Coal Board Coal Research at Stoke Orchard, near Cheltenham and started work there in the autumn of 1957; in 1958 took up a post-doctoral fellowship at the National Research Council in Ottawa.

Prof. Holmes wrote of his time at UCL:

The three years at University College were among the most happy and productive years of my life. The friendships begun there have endured to the present.

Prof. Holmes has written a fascinating and entertaining chapter on his time at UCL Chemistry, describing the academics, the laboratories and an interesting insight to the social life in the department. We are delighted Prof. Holmes has shared this with us and hope you enjoy reading the chapter below.