Welcome to UCell: an electrochemical outreach group based at University College London.

UCell is a group of PhD and masters students based at UCL, who are passionate about hydrogen, clean technologies and electricity storage and love sharing our knowledge and experience to the general public through outreach.

UCell was launched in 2013 and since then, we have travelled around London and the UK attending festivals and events with our 3 kW fuel cell stack to power stages, thermal cameras and, well, anything that needs powering!

As well as the fuel cell stack, we also take low power demonstration fuel cell kits to schools and smaller events to explain more about hydrogen generation; from electrolysis, the use of hydrogen in fuel cells and how energy storage can be done using batteries. In a time of a changing energy landscape, we aim to show how these technologies are starting to become a regular feature in our everyday lives. 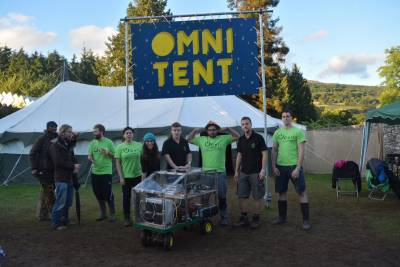 It all started in 2011 in a pub in London, Ralph Clague and Ellen Dowell (curator of Einstein’s Garden) had a brilliant idea… to power the electronics of a small tent at the Green Man festival using green energy. Relishing a challenge, the next day Ralph contacted Dan Brett asking if there were any students at UCL willing to take on a summer project – to build a hydrogen fuel cell system to provide emission free power for Einstein’s garden. Remembering that Leon Brown had enquired about a summer project just days before, the foundations were laid for UCell. Thanks to support from the EIL and Imperial College, later that summer the fuel cell system was up and running and successfully provided the power for a garden shed, backstage.

In 2013 the team grew even more and UCell was born. A further five students were drafted in to work on the project, alongside their PhDs. The team again powered the performance stage at Einstein’s garden and incorporated a fully automated hybridisation run from 2 Arduinos. We also provided live stats, with the help of a Raspberry Pi, from the fuel cell such as voltage, current and power output. In 2014 the team returned to Green Man Festival for the fourth year, debuted at Glastonbury Festival, and expanded their event portfolio of schools events, including providing power to the Greenpower International Finals. Since then, UCell has continued to grow, expand, change and update.

We are still attending festivals, powering the stack for small demonstration lectures at UCL and taking our demo kits to spread the word of upcoming energy technologies! Now not just a fuel cell outreach group, we are doing work on the themes of electricity generation from fuel cells (using hydrogen), hydrogen production using electrolysis and finally, energy storage using batteries.

A fuel cell works by reacting hydrogen and oxygen to generate electricity and water as the only product. If you increase the size of the fuel cell, you can increase the amount of electricity produced. Thus, fuel cells are currently very promising for use in vehicles, public transport and stationary power for homes. It is expected that fuel cells, along with batteries, will form a large part of the energy mix in the coming years and dispelling some of the myths around the dangers of hydrogen, through outreach and engagement with the public, is very important. 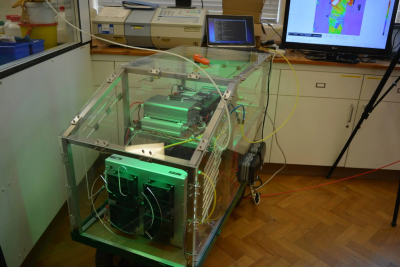 Our fuel cell stack is a 3 kW stack and using only hydrogen (and oxygen from the air) can power just about anything that is plugged into it! The fuel cell stack and all the other components that are used for controlling the stack are housed in a clear casing, so visitors can see exactly how the stack would work. Our fuel cell system could be compared to that of a car – for example, the Toyota Mirai (Toyota’s first fuel cell vehicle) has many of the same parts as our stack, just on a larger scale!

See all UCell News and Events

Find our more about UCell events and activities through our YouTube channel.

If you’re interested in science outreach, whether that involves how to become a part of UCell, inquiring about a particular event, or anything in between, please send us an email.