Spatial and temporal control of gene expression is essential for the development of complex multicellular organisms. Inappropriate gene activity leads to developmental abnormalities and cancer. My research is focused on understanding the fundamental mechanisms controlling gene expression in mammalian cells.

We are investigating two related questions:

The eukaryotic genome is organized in three-dimensional (3D) nuclear space in a specific manner that reflects its underlying cell state. With the advent of molecular methods designed to ‘capture’ chromosomes in their native 3D conformations, our understanding of the relationship between chromosome structure and genome function is rapidly changing. Recent studies have revealed that chromosomes are composed of a hierarchical series of chromatin loops. These loops organize large complex chromosomes into discrete, manageable compartments, which are thought to spatially restrict regulatory elements to their target genes, promoting their physical interaction. Understanding the molecular basis of this regulatory architecture will transform our ability to build reliable models of gene regulation and is a major focus of the work in my laboratory.

Cohesin is an ancient and essential protein complex with fundamental roles in chromosome topology. Defects in cohesin and its regulators are increasingly recognized as being responsible for chromosome mis-segregation in human cancers and are the cause of developmental disorders, thought to result from widespread gene deregulation. Cohesin complexes are required for sister chromatid cohesion during mitosis, DNA repair and also function in gene regulation. Cohesin regulates gene activity primarily through the formation/stabilization of chromatin loops. Cohesin-anchored chromatin loops are widely distributed throughout the genome, creating an extensive network of long-range contacts and thereby defining global chromosome topology. Thus, cohesin is a critical component of regulatory architecture and is key to our understanding of how topological configurations of chromatin influence gene expression and consequently cell fate.

We are currently studying how cohesin-mediated nuclear architecture influences the regulation of genes during stem cell differentiation in the mouse. We are developing unique genetic tools and sophisticated systems to build a comprehensive understanding of how topological conformations of chromatin collaborate with transcription factors to drive lineage commitment.

Corruption of cell differentiation is also a hallmark of cancer. Understanding how cancer stem cells develop is of great importance. We are investigating the brain tumour glioblastoma, where mutations in cohesin proteins have been identified. We aim to shed light on cancer development through understanding of the molecular mechanisms underlying control of chromatin structures. 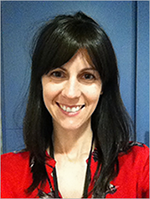