The highly anticipated results from the ARIEL3 clinical trial, evaluating use of rucaparib among women with advanced ovarian cancer, have been published in The Lancet. According to study data, maintenance therapy with rucaparib (Rubraca, Clovis Oncology) significantly extended progression-free survival among women with platinum-sensitive recurrent ovarian cancer. 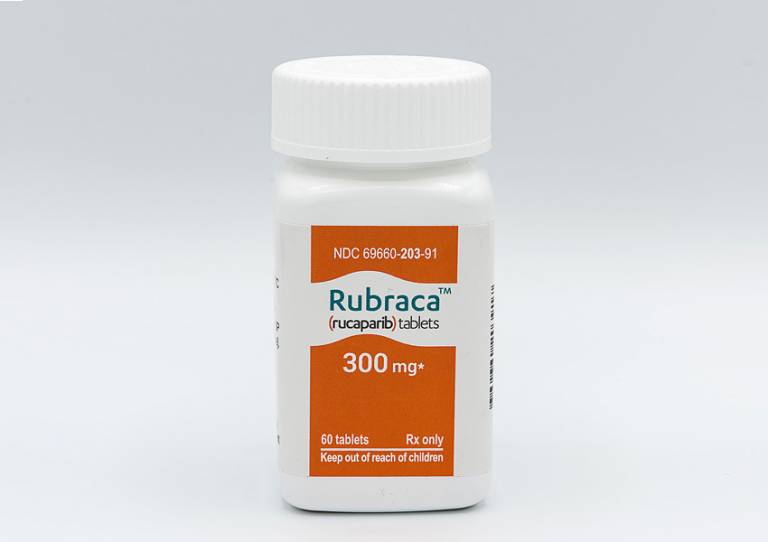 The study team observed that the drug was beneficial to women with advanced ovarian cancer regardless of tumour genetics - for example, with with or without BRCA mutations.

Rucaparib is a type of drug known as a PARP inhibitor.  PARP (Poly-ADP-Ribose Phosphorylase) is a type of enzyme involved in DNA repair within a cell. PARP inhibitors work by preventing cancer cells using the PARP enzyme to help repair their DNA, which results in an increasing number of DNA faults. When the number of DNA faults in a cell reaches a high enough level, a defensive mechanism is triggered - cell death (apoptosis).

In the ARIEL3 trial, patients with platinum-sensitive, recurrent ovarian cancer were randomised to receive rucaparib or placebo. All enrolled patients had received prior platinum-based chemotherapy and were split into three cohorts according to tumour genetic mutations.

“The improvement in progression-free survival was greatest in the BRCA-mutated group, who had a 77% increase, but it was seen across three subgroups that were evaluated,” lead investigator Dr Jonathan Ledermann, Professor of Medical Oncology at UCL Cancer Institute and Director of Cancer Research UK and UCL Cancer Trials Centre, said in a statement. “These results reinforce rucaparib’s potential to provide an enduring and significant clinical benefit in women with advanced ovarian cancer, regardless of their tumor genetics.”

“Overall what I think we can conclude is that rucaprib maintenance therapy produces a significant improvement in progression free survival with platinum-sensitive relapsed ovarian cancer.” concluded Professor Ledermann.

Results of the ARIEL3 trial were presented at the European Society for Medical Oncology Congress, September 2017 (Madrid) by Dr Jonathan A Ledermann.

Professor Jonathan Ledermann discusses how the three most promising PARP inhibitors; olaparib, niraparib and rucaparib might fit into the treatment landscape in ovarian cancer. Recorded at the ESMO 2017 Congress in Madrid, Spain.