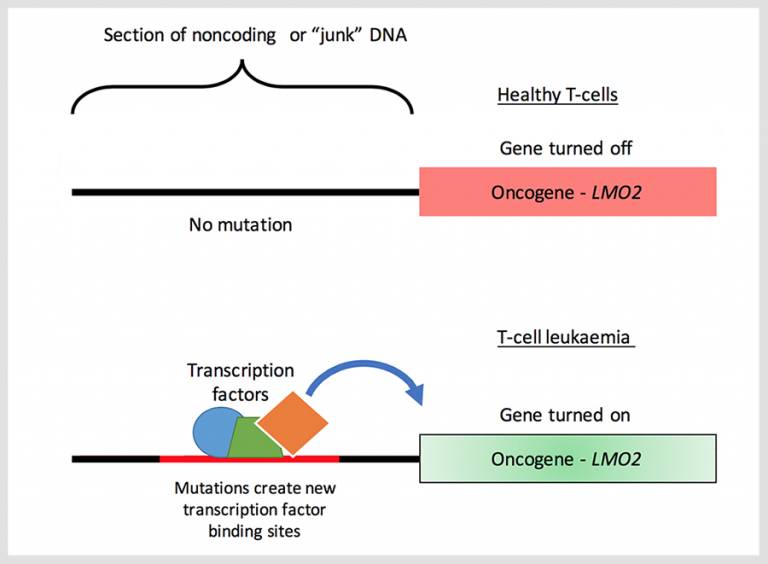 A scientific team led by UCL has found a hotspot in ‘junk’ DNA that appears to be controlling how a nearby cancer-causing gene behaves, according to research published in the journal, Blood.

Researchers identified a region in noncoding DNA  that is mutated in some adults and children with T-cell acute lymphoblastic leukaemia (T-ALL) that activates a nearby cancer-causing gene (oncogene) called LMO2, that progresses T-ALL.

The LMO2 gene is usually switched on to help the body develop and regulate T-cells. As T-cells mature, LMO2 is switched off or silenced, as it is no longer needed. However, in some instances, LMO2 is turned back on and left on, causing T-cells to grow out of control, leading to T-ALL - a very aggressive form of blood cancer.

It is known that T-cells can proliferate unchecked when DNA becomes damaged. But high-levels of LMO2 expression are seen in almost half of all cases that don’t have the characteristic DNA damage that is associated with T-ALL, so there must be other mechanisms influencing the gene’s behaviour.

“Research is increasingly showing that noncoding DNA, previously called ‘junk’ DNA, is actively involved in gene-control,” says Dr Sunniyat Rahman, postdoctoral researcher and lead author of the study. “In this study, we’ve found new mutations in a noncoding DNA region next to LMO2 that activates its expression, or turns it on. Remarkably, we show that the mutations are not just random, but introduce binding sites for transcription factors - proteins that help to turn genes on - that permanently switch on LMO2 leading to T-ALL in patients.”

Using gene-editing technology, CRISPR, the scientific team found that by removing the mutation from the hotspot in the junk DNA, they could return LMO2 to its off state.

Dr Marc Mansour, Head of the Leukaemia Biology Research Group at UCL Cancer Institute and senior author says: “T-ALL is a type of acute leukaemia meaning that it is aggressive and progresses quickly. At the moment, treatment options include non-specific chemotherapy or radiotherapy, or a gruelling stem cell transplant. Although significant advances have been made in the treatment of T-ALL, there are still many people who do not respond to their treatment, or are unable to tolerate the side-effects or procedures. So we urgently need to find new ways to treat this aggressive type of blood cancer.”

Dr Rahman adds: “Our research wants to understand the fundamental biological events that cause T-ALL, so we can help develop new and more precise therapeutic options for people living with this blood cancer. Finding mutations in the ‘junk DNA’ may help highlight new ways to target the genes that drive T-ALL that so far have been under the radar. Working with other international colleagues, we have also discovered similar mutations near other genes known to drive T-ALL, including TAL1 and the closely related LMO1. And now that we know that junk DNA can be really important in leukaemia formation, it is likely to also be relevant to other types of cancer.” 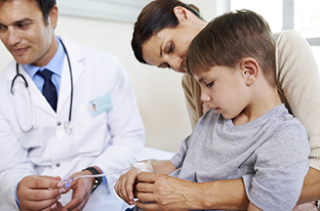 Acute lymphoblastic leukaemia (ALL) is the single most common form of childhood cancer. Even though ALL can be successfully treated with chemotherapy, there remains a significant proportion of children and young adults who stop responding to treatment. Dr Marc Mansour and his team have identified a missing gene that could hold the key to targeting resistance and developing new, lifesaving treatments for this high-risk group. 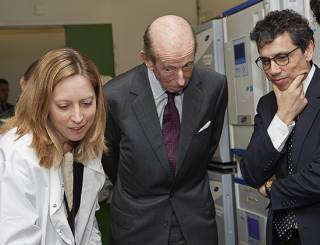 His Royal Highness The Duke of Kent visited laboratories at University College London (UCL) today to hear about a cutting-edge research project looking at ways to overcome treatment resistance in the most common form of childhood leukaemia.