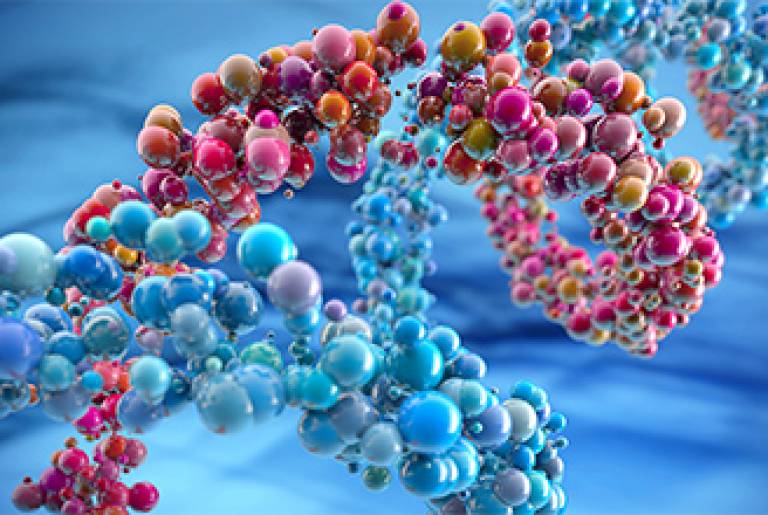 Researchers, led by Dr Richard Jenner, have identified a new cellular mechanism involving a protein complex that helps control the identity of cells and dictates which genes are turned off. The findings, published in Genome Research, could potentially inform future stem cell therapies through cell reprogramming and provide vital clues about specific processes that are adversely modified in cancer cells.

The study centred on an important epigenetic regulator known as polycomb repressive complex 2 or PRC2. This protein complex modifies how tightly DNA is packaged in the cell to switch certain genes off, these modifications do not change the DNA sequence itself but alter the way it functions. The research team have discovered that PRC2 is kept away from DNA by RNAs produced by active genes, so genes that are switched on (active) prevent themselves from being switched off inappropriately.

“We have found a major role for RNA in determining how DNA is packaged within a cell,” explains Dr Richard Jenner, Reader in Molecular Biology at UCL Cancer Institute. “There is a set of proteins in the cell which act to package genes up tightly to stop them being turned off - it helps the cell remember what type of cell it should to be and what it should be doing. When a gene is switched on, it’s actively making RNA, and we found that these RNAs bind to PRC2 so that it can’t get to the gene to switch it off. So essentially the gene maintains its own activity.”

The cell’s memory of what type of cell it should be - its epigenetic state - is often rewired in cancer. Modulating PRC2 activity is a promising new therapeutic tool to correct this cellular memory and thus stop the inappropriate growth of cancer cells. Altering epigenetic state is also key to reprogramming cells for stem cell and regenerative therapies.

“We knew PRC2 was associated with DNA but did not know the extent to which it was also binding to RNA.” says Dr Jenner. “There’s a whole other life to this complex that we didn’t know about - now we know that half of PRC2 is actually bound to RNA instead, we might be able to manipulate that in cancer to change its activity and thus restore cellular memory. This isn’t something that is clinically accessible yet but it gives us a greater understanding about what might be going wrong in cancer and suggests a new way we might be able to correct it.”

Leading on from this study, the research team are hoping to examine PRC2’s ability to modify genes and the effect of it being kept off genes, and investigate at how the balance of these two functions are changed in cancers.

This work was led by the UCL Cancer Institute, in collaboration with researchers at the UCL Institute of Neurology and the MRC Clinical Sciences Centre at Imperial College. The study was funded by the European Research Council (ERC), Worldwide Cancer Research and EMBO.