A large international trial involving UCL and UCLH has found that pembrolizumab, a form of immunotherapy, more than doubled the ‘progression free survival’ time of patients with a specific subtype of advanced bowel cancer, when compared with chemotherapy. 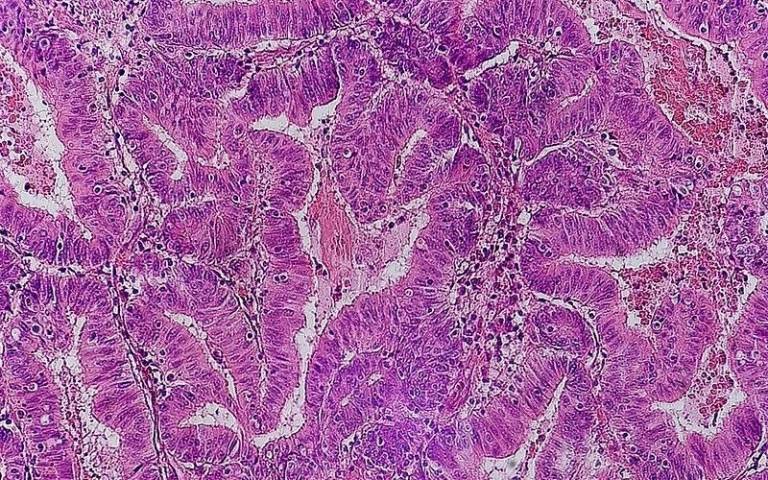 ‘Progression free survival’ is the length of time during and after the treatment of a disease, such as cancer, that a patient lives with the disease but it does not get worse. In a clinical trial, measuring the progression-free survival is one way to see how well a new treatment works.

As part of an interim analysis of clinical trial data, presented at the American Society of Clinical Oncology (ASCO) Annual Meeting, researchers found patients who were treated with pembrolizumab (also known as Keytruda) had ‘progression-free survival’ of 16.5 months (on average), compared with 8.2 months for those who were treated with chemotherapy.

The trial’s UK Chief Investigator, Dr Kai-Keen Shiu, Honorary Associate Professor in Oncology at UCL Cancer Institute and Consultant Medical Oncologist at UCLH, said:  “This is the first randomised controlled study to show that first-line immunotherapy is significantly better than chemotherapy at shrinking metastatic bowel cancers with these specific DNA mutations, and delaying the time it takes for the cancer to progress.

“Whilst only around five per cent of advanced bowel cancer patients have these genetic mutations, they usually have a worse prognosis, and less response to chemotherapy and other targeted agents.

“The results from this trial really are game-changing and will almost certainly result in a paradigm shift in our current clinical practice.”

Dr Shiu added: “The results of the KEYNOTE 177 trial have been keenly awaited by patients, clinicians and scientists alike. It is very encouraging that the side effects of pembrolizumab are significantly less than with chemotherapy, so not only the quantity but also the quality of life of these patients is better on immunotherapy.

“Some of my trial patients had a complete response to this therapy, are very well and have now been in remission for more than three years.

“There is ongoing collaborative research at UCL, UCLH and our research partners to further our understanding of why some patients benefit so much from immunotherapy whilst others do not.”

Lead author Professor Thierry André, of the University of Sorbonne, France, said: “Pembrolizumab works in non-randomised studies in this group of patients with advanced disease. This randomised study demonstrates a huge benefit in first line with pembrolizumab and should be the new standard of care.”

*These stability figures are accurate. Patients receiving immunotherapy usually either respond well and/or stabilise disease but then their disease does not usually progress or relapse for a long time.  Patients on chemotherapy are less likely to have good responses but more disease stabilisation. However, in the majority of all cases, the effect of chemotherapy doesn’t last as long unlike the durable benefits of immunotherapy.