A single dose of radiotherapy is as “effective” as five doses for end-of-life cancer patients suffering with painful spinal canal compression, finds a large study conducted by UCL. 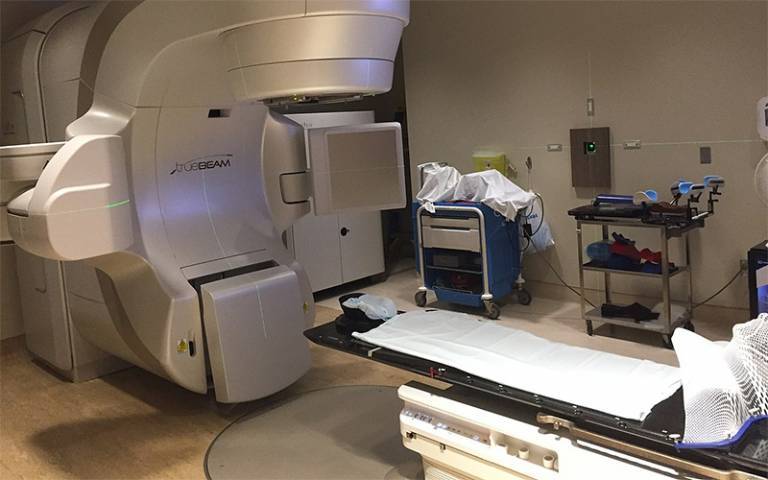 Spinal canal compression is a common complication in cancer patients when the cancer has spread to their spine. Radiotherapy is used to control pain and alleviate symptoms. Around three to five in 100 people (3-5%) with cancer develop spinal canal compression, which equates to around 4,000 people in the UK each year.

As part of the SCORAD randomised clinical trial, published in JAMA, researchers wanted to find out if giving just one dose (single-fraction) of radiotherapy could be used instead of five doses (multi-fraction) which requires several hospital visits.

The lead trial investigator, Professor Peter Hoskin (University of Manchester, Mount Vernon Cancer Centre (NHS)), said: “In the UK, NICE guidelines do not currently stipulate a standard treatment regimen, though most patients with spinal canal compression or other metastatic bone disease are given several fractions.

“We believe our findings, which show equal clinical effectiveness for single-dose radiotherapy, provide strong evidence for NICE guidelines, and those in other countries, to be changed to stipulate a one-dose one-visit approach, reducing unnecessary discomfort for end of life cancer patients without compromising efficacy.”

“At the moment, with no recommended radiotherapy schedule for these patients, many are given several doses of radiation treatment, and each dose requires a separate visit to the hospital. Patients and their carers have to make multiple journeys, which can be uncomfortable to patients, inconvenient and expensive.

“This is the first large study to assess whether giving a single dose of radiation in one visit is as clinically effective as multiple doses. Our trial showed that one dose was just as good as several doses for a range of patient outcomes.”

In total, 686 patients with metastatic cancer and spinal canal compression were recruited from 42 UK and five Australian radiotherapy centres. Half were randomly assigned to be given just one radiotherapy dose, and the other half were given five doses which involved visits to the hospital on five consecutive days.

Effectiveness was assessed by whether patients were able to walk, with or without aids such as walking sticks. This was done at about one, four, eight and 12 weeks after starting radiotherapy.

At week eight, 342 patients were still alive, and among these, 69% who had been given one dose were able to walk compared with 73% who had five doses; results that are considered close enough clinically. At week four, the corresponding percentages of patients who could walk were 67% (one dose) and 68% (five doses); and at week 12 the results were 72% (one dose) and 68% (five doses).

Many other patient outcomes were also similar between patients who had been given either one or five radiotherapy doses. At 12 weeks, 50% of patients were still alive in the group who had been given one dose, close to 55% among patients who had five doses – a difference that was not statistically significant. Having additional cancer treatments, supportive care therapies, quality of life and pain were all similar between having one or five doses.

The study was funded by Cancer Research UK and the Cancer Council Queensland, with support from the National Institute for Health Research.

About half of patients who took part in the trial died before eight weeks, which is when the main measure of efficacy was assessed. Having a lower number of patients than expected meant that one statistical criterion was not strictly met for determining whether a single radiotherapy dose was as effective as having five doses, when comparing the percentage of patients who could walk. Although this was mentioned in the published article (as per JAMA requirements), the conclusion makes clear that the one statistical criterion needs to be interpreted carefully, because it has no meaningful impact on the clinical findings.

The conclusion that one dose of radiotherapy should be used instead of five doses for most patients with spinal canal compression, is supported by all of the other statistical criteria and multiple patient outcomes