The first genetic marker for the bone tumour, osteoblastoma, has been discovered by scientists at UCL, the Wellcome Sanger Institute and the Francis Crick Institute. 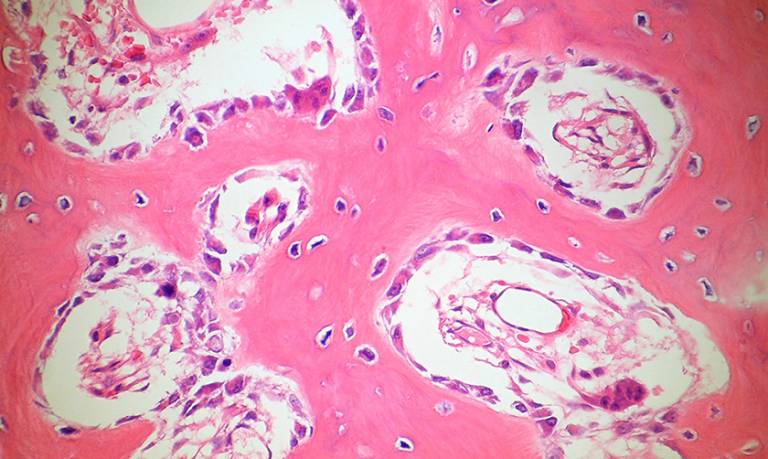 Whole-genome and transcriptome sequencing of human bone tumours revealed that a genetic change that affects the transcription factor, FOS, is a hallmark mutation of osteoblastoma.

Osteoblastoma is the most common benign tumour of the bone, mainly affecting children and adults between the ages of 10 and 25. It is treated by surgical removal of the tumour, however the diagnosis of osteoblastoma can be challenging. Under the microscope, osteoblastoma tumours can look very similar to osteosarcoma, an aggressive form of bone cancer that requires extensive treatment, sometimes including amputation or significant surgery and chemotherapy.

The team carried out whole genome and whole transcriptome* sequencing on five osteoblastoma tumours and one osteoid osteoma tumour.

Researchers discovered a mutation that affects FOS, a transcription factor that turns on and off genes to ensure they are expressed in the right cell at the right time, as well as its relative, FOSB. When the team extended their results in a study of 55 cases they found that mutations in FOS and FOSB are ubiquitous across osteoblastoma and osteoid osteoma.

To explore whether their result could be useful as diagnostic markers for osteoblastoma, scientists examined the whole genome sequences of 55 osteosarcoma cases, and found none of the samples harboured mutations in FOS or FOSB. When the team analysed over 2,500 non-osteoblastoma tumours, they again did not find similar mutations, meaning the FOS and FOSB mutations are specific to osteoblastoma.

“We have known for a while that FOS is involved in the progression of bone tumours, however we have not found mutations of FOS in human bone-forming tumours before. Using genomic sequencing we have shown that mutations in FOS and its relative FOSB are diagnostic markers of osteoblastoma.”
Dr Matthew Fittall, co-first author from the Francis Crick Institute, UCL Cancer Institute and Wellcome Sanger Institute

“Genomics is transforming our understanding of cancers. Our discovery of the genetic mutation that characterises osteoblastoma will help clinicians diagnose it with more confidence and direct the correct treatment."
Professor Adrienne Flanagan, co-lead author from the UCL Cancer Institute and Royal National Orthopaedic Hospital NHS Trust.

“The main clinical challenge when diagnosing osteoblastoma can be to reliably distinguish these tumours from osteosarcoma. These two forms of bone tumour require very different treatments: osteoblastoma tumours just need removing to ease symptoms, whereas osteosarcomas is treated aggressively with surgery and intensive chemotherapy. For the first time, we have discovered a specific mutation that defines osteoblastoma.”
Dr Sam Behjati, co-lead author from the Wellcome Sanger Institute and University of Cambridge