Joseph Watson, Asylum for the Deaf and Dumb

The Braidwood school later moved to London and it was this school that was visited by Abbé Sicard and Laurent Clerc in 1815, at the same time as Thomas Gallaudet was in London. Watson, nephew of Braidwood, and Headmaster of the London Asylum for the Deaf and Dumb in the early 19th century, describes his teaching methods in detail in his book On the Education of the Deaf and Dumb (1809). He is opposed to the use of signed versions of spoken language such as the Signed French used in the Paris school.

Never let any thing so chimerical be thought of as an attempt to turn master to the deaf and dumb, in the art of signing… What should we expect from an European who should undertake to teach his own… language, to a South- Sea Islander, who was henceforward to live among Europeans… Should we suspect that the teacher would set about new modelling, methodizing and enlarging this … language as the readiest method to make the islander acquainted with the European tongue…

In Instruction of the deaf and dumb Watson wrote that "Persons born deaf are, in fact, neither depressed below, nor raised above, the general scale of human nature, as regards their dispositions and powers, either of body or mind." He considers what language is, & describes how he goes about "communicating a knowledge of language to the naturally deaf and dumb." The second part of the work, here in a separate volume, has lists of vocabulary & plates designed to encourage a child to acquire an understanding of written & spoken language. 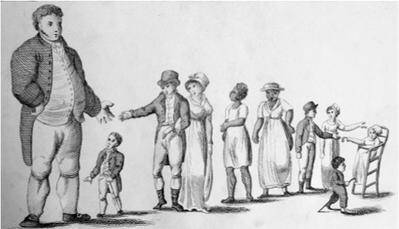 Instruction of the deaf and dumb, or, a theoretical and practical view of the means by which they are taught to speak and understand a language, containing hints for the correction of impediments of speech. Together with A vocabulary; illustrated by numerous copperplates, representing the most common objects necessary to be named by beginners, by Joseph Watson, 1809-10 (Action on Hearing Loss Library).