A vivid description of Edward Bone, a deaf servant, is found in Richard Carew's Survey of Cornwall (1602). Bone had some level of English knowledge even though he could not speak. He was able to lipread the local preacher, by 'setting himself directly against the Preache, looke him stedfastly in the face, while his Sermon lasted', although his preferred method of communication appears to have been signing. There is a vivid description of his meeting his deaf friend, Kempe:

Somewhat neerre the place of his birth, there dwelt another, so affected, or rather defected, whose name was Kempe: which two, when they chaunced to meete, would use such kinde embracements, such stranfe, often, and earnest tokenings, and such heartie laughtes, and other passionate gestures, that their want of a tongue, seemed rather an hinderance to other conceiving [understanding] them, then to their conceiving one another.

John Bulwar dedicated his book Philocophus (1648) to two deaf brothers. His earlier book, Chirologia (1644) describes signs and gestures in use at the time. Some resemble signs still in use. 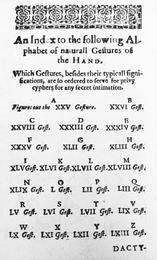 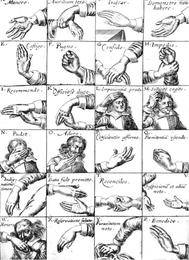