Dr Ben Collen was an internationally recognized conservation scientist whose work has provided new knowledge and understanding about recent trends in wildlife populations across the world. 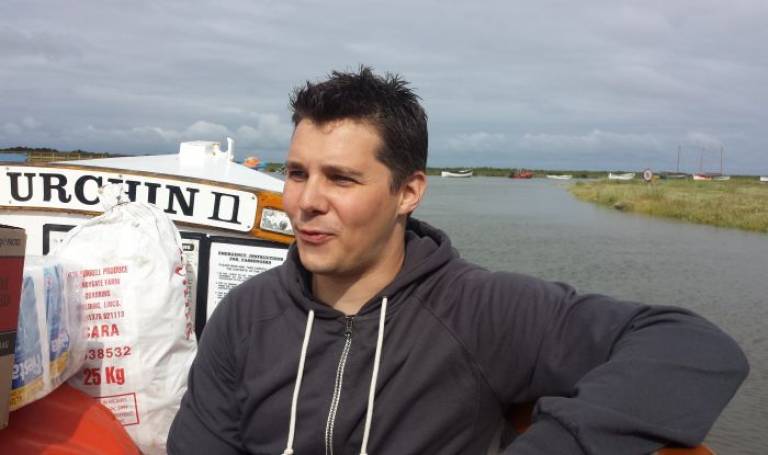 His research was at the forefront of developing science-based indicators to track the precipitous loss of biodiversity around the world and had a major impact on global conservation policies. He died on 19 May 2018 at the age of 40 following a bone cancer diagnosis just 15 months earlier. He tackled his illness with the same attitude that characterized his work, always being positive, open, creative and with great good humour. His untimely death has left a huge hole not only in UCL's newly-established Centre for Biodiversity and Environment Research, of which he was a founder member, but also in the international conservation science community.
After graduating in 2001 with a degree in Biology at Imperial College, Ben spent a year working in Kenya undertaking field work on large mammals. The bug to work in conservation took hold and he studied for a Master's degree at the University of York, undertaking his research project with a like-minded set of conservation biologists based at the Institute of Zoology in London. Ben stayed on to study for a PhD with Professor Georgina Mace and Professor Andy Purvis at Imperial College on understanding how to assess species extinctions. In 2005, with his PhD completed, Ben joined the Indicators and Assessments Unit at the Institute of Zoology working with Dr Jonathan Baillie. Ben was instrumental in the re-launch of the WWF Living Planet Index (LPI). Ben massively enhanced the underlying data and rigour of the analysis of the index that established it as the most widely used indicator of global wildlife population trends, an essential tool for understanding human impacts on our planet's biodiversity. His work led to a wide range of international collaborations with academics, governments and conservation charities, making him a key contributor to the landmark assessment of the state of global biodiversity in 2010.
In 2013 he joined UCL's Centre for Biodiversity and Environment Research (CBER) in the Genetics, Evolution and Environment Department, and was promoted to Reader in 2015. Ben played a critical role in defining CBER's research agenda and developing it as an international centre of excellence for biodiversity research, now with over 40 research staff, post-docs and PhD students. Ben's own research attracted a large group of research students and postdocs working on understanding how biodiversity is changing across the world, supported by several large research grants, most recently from the Leverhulme Trust, WWF UK and the Darwin Initiative. He made a major contribution to the re-establishment of an undergraduate field course at UCL's unique field site at Blakeney Point on the north Norfolk coast, and will be remembered by a number of cohorts of Biological Science students for his lively encouragement of their first experience of field research.
We are all devastated by his untimely death, but his work and his style permeates CBER and his legacy will live on in his projects and his students. Our thoughts are with his wife Alanna, his daughter Ottilie and the rest of his family. Messages from around the world have paid tribute not only to his scientific contributions, but also his kindness, generosity of time and spirit, his mischievous sense of humour, and how he inspired so many to pursue careers in conservation. He was the very best of us, and he will be sorely missed by students, staff and friends alike.
Ben's wife Alanna has set up a JustGiving page in his memory.