During our every day life, many of our tissues are subjected to large deformations. BioP scientists have now uncovered how stresses are dissipated in living tissues to prevent their rupture. 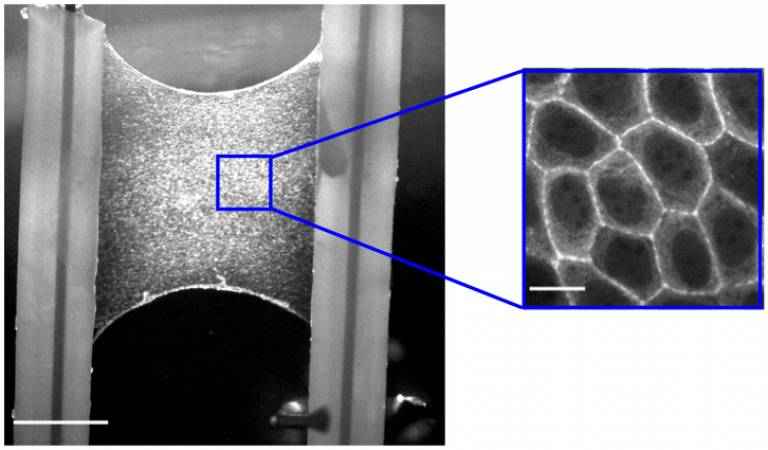 The research, published in Nature Physics, provides us with a better understanding of how dynamic rearrangement of the skeleton of living cells protects tissues against failure. This may lead to optimal mechanical design criteria for implants cultured in vitro and allow us to understand how the dramatic shape changes that take place during embryonic development can arise.

In earlier research, the team designed a simple experimental system that allows the generation of free-standing two-dimensional sheets of cells (monolayers) with a thickness of just 10 micrometers – about 1/100 of the width of a human hair. The mechanics of these sheets can be precisely characterized using tests commonly employed in engineering using equipment specially designed by the team.

For this study, the researchers sought to understand how monolayers react to an increase in length of up to 50% applied in less than a second – mimicking, for example, the deformation experienced by our skin when we move. By measuring the forces within the tissue, they found that over 70% of stress is dissipated within only 50s, reducing the tissue’s risk of fracture.

“A central part of this dissipation process is that the tissue actually increases its length in response to the deformation” explained Dr Nargess Khalilgharibi (UCL, London Centre for Nanotechnology, now at the MRC-LMCB).

The team then wanted to understand how lengthening could take place. The skeleton of living cells is made of biological polymers that continuously change their arrangement over time. Within tissues, cells are interfaced to one another via specialized structures that function similar to Velcro.

“We reasoned that the lengthening may arise because cells remodel their skeleton to adopt the new shape imposed by the deformation” said Professor Guillaume Charras (UCL, LCN, Cell and Developmental Biology).

To test this hypothesis, the team determined how fast each of the components of the skeleton and the adhesive structures altered their arrangement. They showed that while the skeleton is very dynamic, the adhesions are not.

“Essentially, the Velcro acts as a stable bridge between cells and it is the skeleton that changes its organisation. The combination of these effects allows tissues composed of tens of thousands of cells to behave like one single giant cell” concluded Dr Khalilgharibi.

The research was led by UCL and carried out in collaboration with scientists from Universitat Politecnica de Catalunya, Cambridge University, and Hokkaido University.