How to peel a bug: Engineering fast and effective antimicrobial killers

Watson and Crick proposed the DNA double-helix structure over 60 years ago, but DNA is not always arranged in a double helix, also forming other structures.

Scientists from the London Centre for Nanotechnology (LCN) and National Physical Laboratory (NPL) have engineered a new way to kill bacteria, and subsequently visualised in real time how the bacteria under attack were stripped of their protective membranes and died. These findings could provide a physical basis for designing more-effective antibiotics.

In the search for alternative antimicrobial strategies, the scientists exploited a core advantage of our own immune system – speed. Our immune system uses peptides that recognise and destroy the membranes of harmful bacteria. These peptides are produced in large numbers at sites of inflammation and form groups to quickly and indiscriminately attack any bacteria they encounter.  However, if the groups are small or dispersed, bacteria can escape and multiply, at which point doctors have to turn to antibiotics.

Based on the architecture of these natural peptides, the team predicted and engineered a peptide that, instead of making holes in bacterial cells, would thin and exfoliate their membranes. They validated the process by visualising it at nanometre length scale. The resulting images revealed so-called monolayer poration, in which the peptides nibble a bacterial membrane to expose its oily part to water. This rapidly leads to irreparable ulcers and invariably to the death of the bacteria.

his research was carried out in collaboration with researchers the University of Oxford, the University of Edinburgh, the University of Western Australia, the European Commission Joint Research Centre, Physikalisch-Technische Bundesanstalt and the IBM Thomas J Watson Research Center, and published in the journal Chemical Science. It is now being explored as a way to enhance our defences against the growing threat of increasingly sophisticated bacteria. 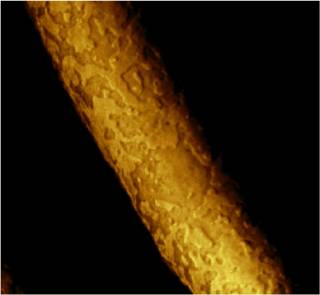