Beyond the DNA double helix: From twofold to fourfold DNA

Watson and Crick proposed the DNA double-helix structure over 60 years ago, but DNA is not always arranged in a double helix, also forming other structures.

Watson and Crick proposed the DNA double-helix structure over 60 years ago, but DNA is not always arranged in a double helix, also forming other structures. One such structure is fourfold DNA, which is found near DNA-encoded genes that are key in causing cancer. By the formation of such quadruplex DNA, the expression of cancer-related genes can be blocked. In collaboration with a team from Imperial College London, scientists at the London Centre for Nanotechnology have studied and visualised the formation of these quadruplexes in looped DNA that may be a better representation of DNA in the living cell than in the short and linear pieces of DNA that are more commonly used for such investigations.

In the cell, DNA is knotted and looped into complex superstructures. Since it is very difficult to study quadruplex DNA directly in the living cell, most studies of quadruplex formation to date are carried out in model systems. The team at Imperial College London have developed small DNA circles as a model system to study quadruplex formation and stabilisation under the constraints that are more similar to those found in cellular DNA. At the London Centre for Nanotechnology, the formation of quadruplex DNA was visualised by atomic force microscopy, with the quadruplexes shown to fold and unfold within minutes.

This work facilitates more accurate studies on the binding of small molecules that stabilise quadruplexes, and that may therefore be pursued as a basis for novel anti-cancer therapies. In general, the use of DNA mini-circles could open new avenues to study how gene expression and suppression is affected by the DNA looping in three-dimensional space. 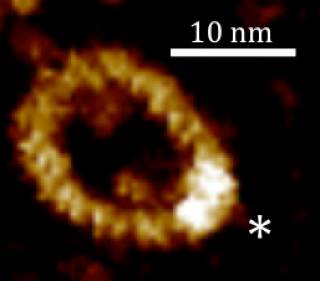 DNA mini-circles by AFM, with the banded structure along the circle that is indicative of the DNA double helix. Quadruply-folded DNA appears as a local thickening of the DNA (see asterisk)