Obsolescence, depreciation and maintenance: unaffordability in the 21st century

In cities around the world, citizens complain that housing is unaffordable, but what that means differs from place to place. 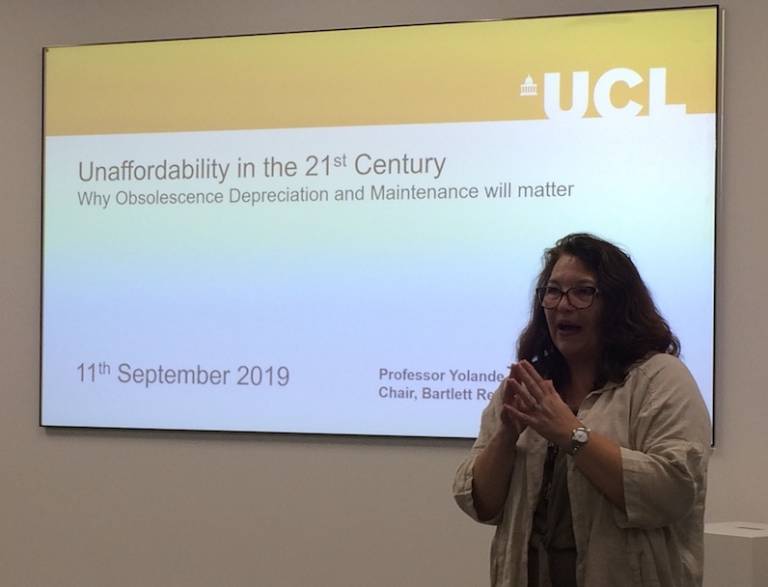 Housing affordability is an issue in almost every city but its definition differs for different people and according to how it is measured, BREI chair Prof Yolande Barnes said.

Speaking at The Case of Affordable Housing: a global perspective on financing and institutional ownership, a one-day conference organised by The Bartlett School of Construction and Project Management, Prof Barnes outlined her research with the Urban Land Institute which found affordability varied according to location, income and household type.

“There are some very complex, nuanced patterns of affordability,” said Prof Barnes.

The research, which looked at Berlin, London, Amsterdam, Barcelona and Warsaw, used the measure of disposable household income, rather than the usual metric of house price to income ratio, and interviewed people in the lower, medium and upper income quartiles to cover different types of housing stock. It also looked at four different households – single people, young families, childless couples and retirees.

In each of the cities the cost of renting was higher than paying a mortgage but there could be difficulty in accessing a mortgage and paying the deposit.

Renting, however, is not a simple picture. In London there is a tradition of single people house sharing to access rental properties but in Barcelona single people have responded by finding accommodation up to 50km outside the city. Here, lack of affordability is evident in terms of displacement.

In cities where social housing is available, such as London, middle-income earners may be more pressed than low-income families who have access to that social housing.

Affordability would also be affected in the near future by the “tsunami of change” in society, finance and digital technology, said Prof Barnes.

As digital technology allows access to everything everywhere, cities are becoming more important as they provide face-to-face contact and chance meetings in the street. This demand for urban living increases the lack of affordable housing in big cities and it will start to put pressure on smaller cities and towns too.

In finance, the big institutions are shifting their emphasis from capital growth to maintaining income streams to pay the baby boomers’ pensions, and interest rates and inflation have plummeted from the historically abnormal highs of the late 20th century.

“When interest rates are low and stable there can be no capital growth without rental growth,” said Prof Barnes.

The shift towards rental growth means investors seeking long-term income streams must pay more attention to occupiers’ needs, whether they are tenants or leaseholders.

“This is part of the affordability issue because tenants will look at the total cost of occupation, including energy costs and maintenance, while owner/occupiers will increasingly consider the service charge and how much the building costs to run,” said Prof Barnes.

“Depreciation and obsolescence are words we haven’t heard in real estate for a long time but they’re starting to raise their heads. This will exacerbate affordability issues in terms of adding to ongoing costs, especially in marginal groups.”