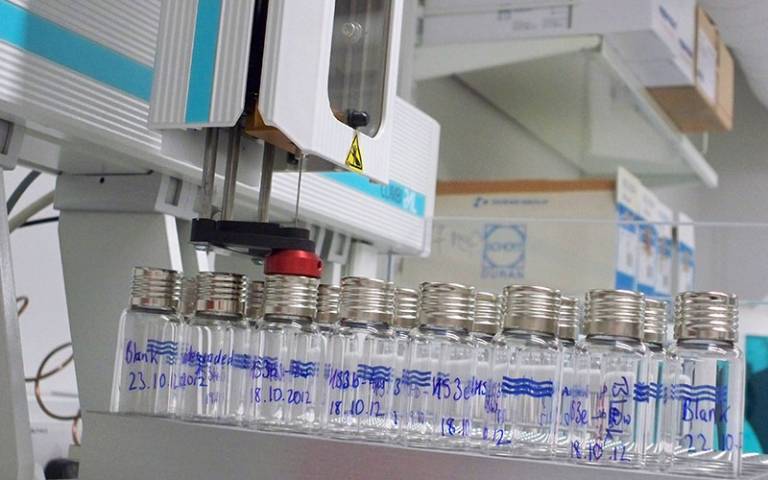 In their publication in Angewandte Chemie, UCL ISH researchers investigate the emissions of volatile organic compounds (VOCs) from plastic-based art objects and provide a first calibration scheme for using VOC analysis to study the degradation of plastics in a museum environment.

Everyone is familiar with the detection of VOCs. They can be sensed by the nose and tongue and indicate different aspects of the current state of the emitting system—be it mown grass in the garden, the level of maturation of cheese, decay in fish, or even if a patient suffers from diabetes. However, the emittance of marker chemicals is not restricted to living systems. Volatile degradation products can also be detected for plastics. Since the beginning of the 20th century, many plastics-based objects have found their way into museums, and conservators and heritage scientists are highly interested in assessing their preservation status, ideally without taking physical samples from the objects.

Working in collaboration with several museums, libraries, and archives, Dr Katherine Curran and her colleagues from UCL ISH and the University of Strathclyde, Glasgow have introduced a non-invasive solidphase micro-extraction gas-chromatography/mass-spectrometry (SPME-GC/MS) method for marker VOCs emitted by several plastics contained in modern museum artefacts. They have also developed a rough calibration system to classify three real objects from Tate into two distinct decay states.

Every plastic leaves its own signature of degradation products. For example, degrading cellulose acetate emits acetic acid (vinegar), which can be quantified over time. To assess the quality and quantity of VOCs from polymers, the scientists chose chemical markers for plastics common in museum artefacts such as cellulose-based polymers, polyurethane foam, poly(vinyl chloride), polystyrene, and polyethylene. As reference degradation states, they used plastic samples exposed to heat for zero to 10 weeks. The aim was to find characteristic VOC patterns: “The VOCs detected provide an insight into the composition and ongoing chemical degradation processes of the objects studied,” the authors remarked.

Based on the detected VOCs, a rough classification scheme as “early stage” and “advanced degradation state” could be established for the different plastics —and tested for real museum objects based on these materials. For two cellulose-based objects from Tate made in the 1920s and 1930s, the scientists reported a low degradation state, but one made in 1923–1924 was found in a more advanced decay. While this might be a matter of concern for the conservators, Curran and her colleagues plan to expand their analysis and a calibration scheme based on naturally aged samples would help reduce the current limitations, they argue.

“VOC analysis is a really powerful tool for disease diagnosis – it gives lots of interesting chemical information in a non-invasive way.  This makes it really useful in a heritage context also.  Here we explore VOC analysis as a non-invasive tool to understand the chemistry of degradation in plastic museum artefacts.

This work complements previous research at UCL ISH on the Smell of Heritage.