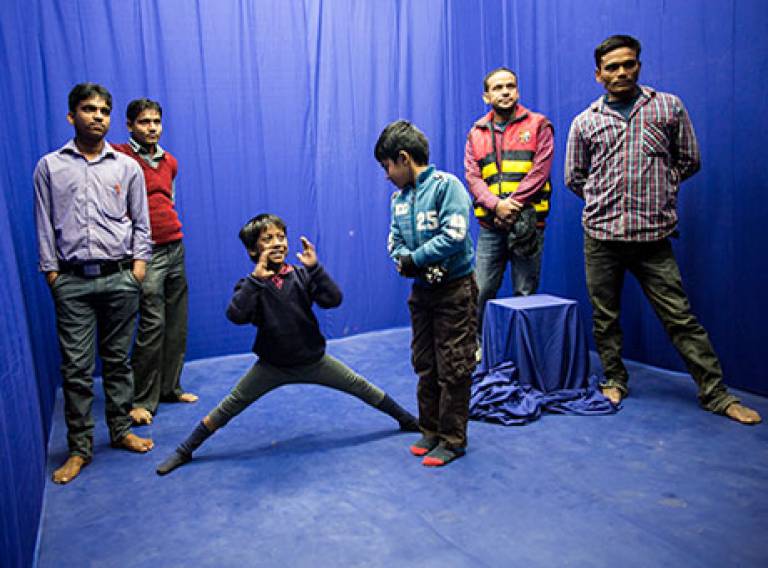 The interactive, telepresent installation was designed for public audiences in Delhi and London and is now on show at London's Southbank Centre as part of the Alchemy Festival and later for the Web We Want Festival.

In megacities such as Delhi and Mumbai - and within one of the fastest growing cities within the world, Ahmedabad - more than 50% of the population live in informal urban settlements. 3x4 metres is the plot size seen to be provided in some resettlement colonies, a government initiative which relocates people within informal inner-city settlements to vacant land on the periphery. 3x4 looks at informal settlements differently where informality is not viewed as a problem, but a promising new model of urbanism for the global south.

The project uses an immersive telematic networked environment to provide a playful, sensorial exploration of new hybrids of digital space. Merging two 3x4 metre room installations at Southbank Centre in London and Khoj Studios in New Delhi through mixed-reality in December 2014, this transnational dialogue intends to set an aspiration for developing metaspace platforms in megacities of the global south.

The 3x4 team (Claire, Paul and Swati) say that 3x4 at Alchemy "brings UK and Indian audiences together in a public performance that builds upon our shared history and collective future as physical and digital space converge in new and unexpected ways"

The digital revolution is coming quickly to India, and one of the project’s aims is to leave a legacy for people in Delhi, which presents a distinct, narrative-driven approach to technology rather than a conventional social media experience. “We’ve looked for analogies for the impact we’re trying to create and one is San Francisco in the 1970s,” said Professor Sermon. “Computer networks were just beginning to emerge and were an experimental medium in shaping the artistic community, creating links between artists in different places and across disciplines. There’s a very clear sense that technology had a big influence on art and on society in California and that’s part of our ambition today.”

The project  has been reported by The Hindu as being "a lot of fun".

3x4 is funded by the AHRC (AH/M00564X/1) as part of a broader collaboration between UnBox, British Council and Science & Innovation Network.