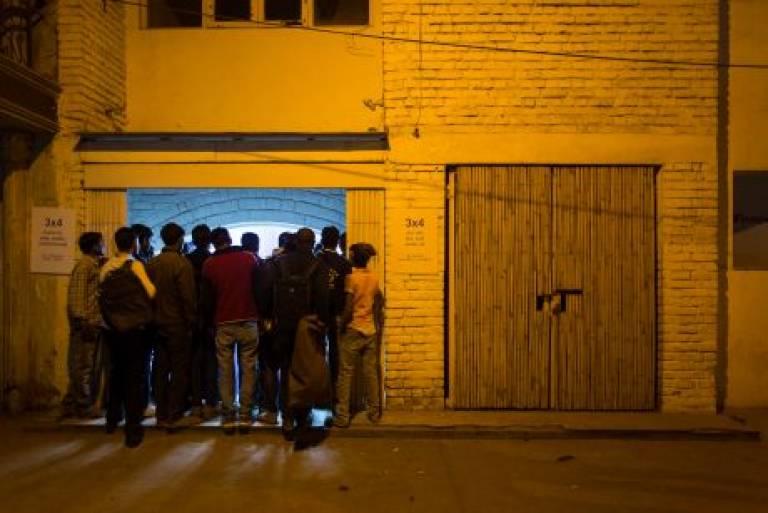 UCL IEDE's Dr Claire McAndrew contributed to the interactive telepresent installation, 3x4. During Unbox Festival, held between the 12th and 14th December 2014, public audiences in Delhi and London experienced a shared living space. Two identical installations measuring 3x4 metres were draped in blue and green chroma-key fabric to create a mixed-reality live video connection, allowing audiences in London and Delhi to coexist in the same 3x4 metre room on a TV screen in front of them.

In megacities such as Delhi and Mumbai - and within one of the fastest growing cities within the world, Ahmedabad - more than 50% of the population live in informal urban settlements. 3x4 metres is the plot size seen to be provided in resettlement colonies, a government initiative which relocates people within informal inner-city settlements to vacant land on the periphery. Dr Claire McAndrew collaborated with Professor Paul Sermon at the University of Brighton, Swati Janu a Delhi-based Architect and photographer Vivek Muthuramalingam from Bangalore, to look at informal settlements in a different way, where informality is not viewed as a problem, but a promising new model of urbanism for the global south. 3x4 used an immersive telematic networked environment to provide a playful, sensory exploration of new hybrids of digital space. Merging two 3x4 metre room installations in Delhi and London through mixed-reality, this transnational dialogue intended to set an aspiration for developing metaspace platforms in megacities of the global south. It built upon practice-based research conducted as UnBox LABS 2014 Fellows in Ahmedabad, India; which used an immersive installation to explore the qualities and values built through self-organised communities that are lost in the resettlement process.