The HARMONY project, ran by UCL Energy Institute's MaaSLab, has been testing the use of drones to deliver medicines to citizens in the village of Trikala, Greece. In 2020, e-Trikala, a partner of the HARMONY project based in Trikala, Greece, started a drone demonstration project to test use of drones to deliver medicines, with the scientific support of the University of the Aegean and UCL. The aim was to promote the use of drone technology for community assistance, as the majority of the people who live in villages in areas like Trikala are older in age and are often dependent on others to bring them the goods they need so they don't have to travel long distances to the nearest cities.

Setting up the drone demonstration

The first step was to initiate a dialogue with the local stakeholders and the community to discuss the barriers and opportunities of this concept. The local Association of Pharmacists collaborated closely with the HARMONY team raising several challenges - some of them regulatory- about the delivery of medicines. For example, the pharmacists have to make sure that the medicines are delivered to the person who has a prescription and that the right medicines are delivered to the right person.

In addition, they have to guarantee that the medicines are not affected by weather conditions during the delivery. Given these barriers and constraints, the initial concept changed and through this cocreation process we ended up with a revised concept: in urgent situations, when a pharmacy in a village runs out of a medicine, the drone would pick it up from the warehouse and deliver it to the pharmacy in the villages; not directly to the person in need.

Although it may seem that the value of the concept has been decreased, there is still a lot of value in this concept. Under this concept, there is no need for the pharmacist or the delivery company to conduct a trip just to deliver a medicine; there is no need for the people in need to conduct a return trip to the city, or to ask their family members or friends to pick up the medicines for them. In addition, the costs and the environmental footprint are decreased as the trip that would be conducted by a car or a van, it is now conducted by an electric drone.

At the same time, HARMONY also collaborated closely with the Hellenic Aviation Authority to secure approval for the flight paths (the routes that the drone will follow) to make sure that the drones will not put in danger the citizens. The approval, support, and guidance of the Hellenic Aviation Authority was vital for the initiation of the demonstration. 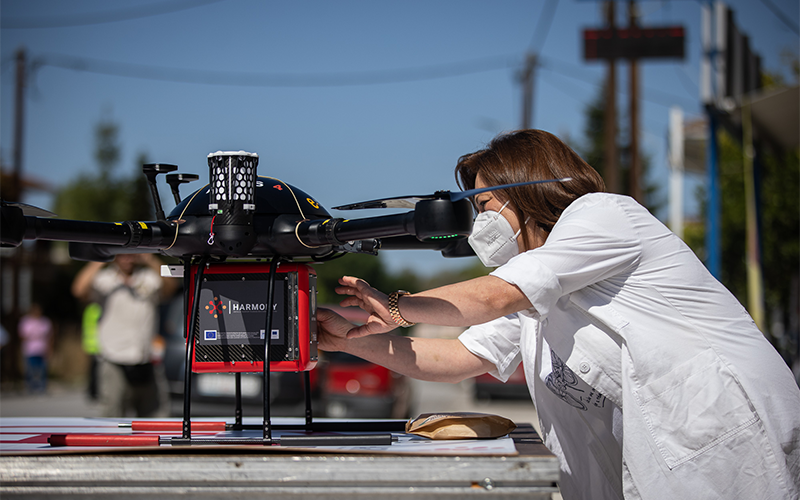 The launch of the drones demonstration

During the European Mobility Week 2021, on the 21st of September 2021, an event was organized to inaugurate the demonstration. Several local and national authorities participated in the event and discussed about the barriers and opportunities. The event closed with the “Firstflight” of the drone.

The drone transferred medicines from Trikala to the pharmacy in Leptokaria village covering a distance of 2.4 km (1.2 km each way). The first flight was carried out in the presence of the Mayor of Trikala, the executives of the Civil Aviation Service, the Association of Pharmacists of Trikala, the drone operator Altus S.A., the sponsor of the drone’s insurance coverage Anytime Interamerican, the company HAM SYSTEMS that sponsored the temperature and humidity sensors in the drone’s container, and eTrikala. The project coordinator from University College London, as well as representatives from the HARMONY partners University of the Aegean and MobyX were also present.

“Given that the promotion of the use of drones for the transport of pharmaceutical material is expected to bring multiple benefits at national and European level, we believe that the activities we carry out within the project will have a positive impact on health, social inclusion, protecting the environment, improving urban mobility and promoting entrepreneurship.”

This project has received funding from the European Union’s Horizon 2020 Research and Innovation Programme under grant agreement Nº815269. HARMONY is a project under the CIVITAS Initiative, an EU-funded programme working to make sustainable and smart mobility a reality for all.