A new report published by the UK Energy Research Centre (UKERC) considers the future effect of domestic air conditioning on the predicted electricity demand and availability of renewable generation.

Many households are expected to install air conditioning in response to rising temperatures. And a new report, co-authored by Dr Jenny Crawley, Research Associate at UCL Energy Institute, aims to provide a first estimate of the effect of domestic air conditioning uptake on the national grid in 2050.

Climate change has caused rising temperatures worldwide, including hotter summers in the UK, and in years to come households may be expected to start installing air conditioning. Currently, most UK building decarbonisation research focuses on creating sustainable and affordable heating solutions, neglecting cooling altogether. Notable unknowns include an informed estimate of the prevalence of air conditioning, and the associated energy and CO2 impacts.

This is especially significant when put in the context of other demands on the grid at the same time. AC and electric vehicles are currently competing for limited renewable electricity at the same time. This leads to a question of which demand is easier to shift out of the evening peak. Electric vehicles are likely to facilitate this more easily, although research is needed into what can be done to shift air conditioning demand forward so it can better utilise solar power.

On the plus side, it appears unlikely that air conditioning will create a problem for the capacity of the national and local electricity grid. This is because if heat is electrified, the winter evening peak will exceed the summer peak predicted in this study by up to a factor of two.

The report was delivered as part of the Whole Systems Networking Fund and the IVUGER initiative to increase participation and visibility of underrepresented groups within the energy sector. The initiative gives women in energy research the space and resources to collaborate focusing on decarbonisation of heat.

This project relied heavily on modelling due to a lack of real data on how air conditioning is used in British homes. Future research needs to tackle these evidence gaps and refine the assumptions made in this study around timing, load size, and demand diversity of cooling use. 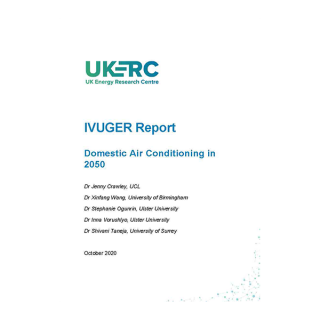