Why are Most Buildings Rectangular? And Other Essays on Geometry and Architecture published

Philip Steadman’s book ‘Why are Most Buildings Rectangular? And Other Essays on Geometry and Architecture’ published 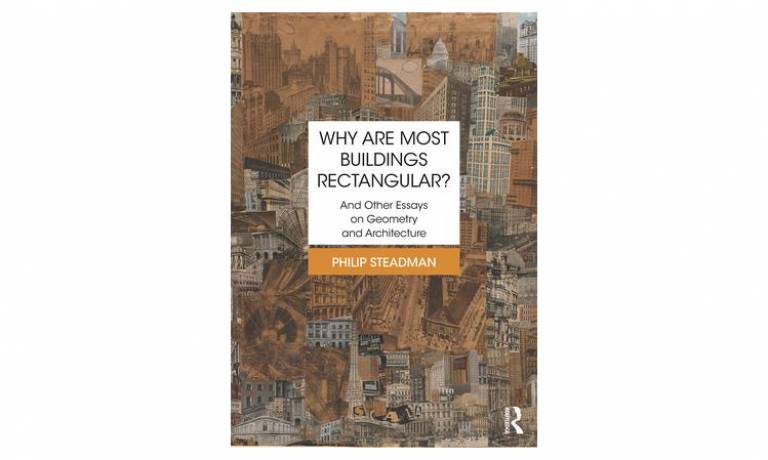 Philip Steadman (UCL Energy Institute) has just published a new book with Routledge: Why Are Most Buildings Rectangular? And Other Essays on Geometry and Architecture. This brings together a dozen essays and papers on architectural and urban form, written over the last twelve years. (The title paper has been in the ‘Top 20’ downloads from UCL Discovery for the last decade.) The book has two large themes: a morphological approach to the history of architecture, and studies of possibility in built form. Within this framework the papers cover the geometrical character of the building stock as a whole; histories of selected building types; analyses of density and energy in relation to built form; and systematic methods for enumerating building plans and built forms. One paper is co-authored with Ian Hamilton and Steve Evans of the Energy Institute: ‘Energy and urban built form: an empirical and statistical approach’

‘Why are Most Buildings Rectangular? And Other Essays on Geometry and Architecture’ is available to order online.

"Steadman’s book is a ‘must read’ for anyone with even a passing interest in why buildings are the way they are. I was completely absorbed by the analytical representations which expose buildings’ underlying spatial characteristics. Steadman’s explanations of buildings’ evolution through time and across space in response to human psychology and societal change as well as the physics of materials, light and air, display his polymathic knowledge." - Kevin Lomas, Professor, Building Simulation, Loughborough University, UK

"It is a pleasure to follow the delicacy and precision with which Philip Steadman applies the science of building morphology to historical questions about why buildings have taken the shapes that they have over the course of time. Steadman’s erudition and subtle wit make this a most enjoyable book for anyone with an interest in the history of building forms." - Adrian Forty, Professor Emeritus of Architectural History, The Bartlett School of Architecture, UCL, UK

"Continuing to demonstrate the fruitfulness of possible form, Philip Steadman asks deceptively simple questions and answers them with his enviable ability of combining academic rigour, lightness of touch and a deep sense of humanity. The articles in this volume are some of the pieces I would most want to spend time tracking down. They are all the more compelling when taken together." - Karl Kropf, Oxford Brookes University, UK

"This is a timely book as the issues of urban density and built form continue to be key topics of debate. Why Are Most Buildings Rectangular? offers valuable insights into the form and shape of buildings, their spatial configurations and the circumstances of why these are deployed. Philip Steadman, a highly accomplished researcher, provides a portfolio of wide scholarship, systematic analysis and original thinking that re-connects architectural history and architectural science - a rare feat. This book masterfully reveals the underlying principles of built form, explains the architectural choices that are available and their implications. This is essential reading for all architects, engineers and policy makers." - Richard Lorch, Building Research & Information, UK

Philip Steadman is Emeritus Professor of Urban and Built Form Studies at the Bartlett School (Faculty of the Built Environment), University College London, UK. He studied Architecture at Cambridge University from 1960 to 1965, and after graduating joined the newly formed centre for Land Use and Built Form Studies at Cambridge (later the Martin Centre). In 1972 he was a visiting research fellow at Princeton University. In 1977 he went to the Open University to join the Centre for Configurational Studies, of which he was Director until 1998. He joined the Bartlett in 1999. Much of his research has been on the forms of buildings and cities, and their relationship to the use of energy.

He has published three previous books on geometry and architecture: The Geometry of Environment (with Lionel March, 1971), Architectural Morphology (1983), and Building Types and Built Forms(2014). His study of The Evolution of Designs: Biological Analogy in Architecture and the Applied Artscame out in 1979 and was republished in an updated edition in 2008. He has also written books on energy and the built environment, American cities, the effects of nuclear attack on Britain, and the painting technique of Johannes Vermeer (Vermeer’s Camera, 2001).