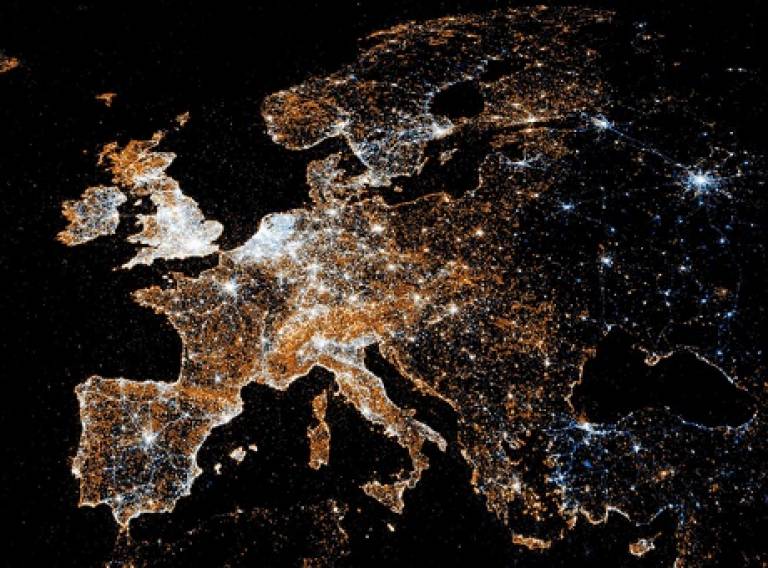 On 21 September UCL-Energy held the final event in a series organised jointly with the French Embassy under the auspices of the long-established relationship between the French Embassy’s Science and Technology Department and UCL’s Grand Challenges programme. The event was supported by the UCL Institute of Sustainable Resources, Climate Strategies and the Institute for Climate Economics (I4CE).

For the final event, UCL-Energy hosted an all-day collaboration workshop at the French Embassy Residence titled ‘Energy and Climate Collaboration in Europe: Ways Forward’. The workshop was attended by more than 30 participants consisting of UK, French and other European researchers, industry and development partners.

The workshop aimed to examine the intersection of national energy strategies in Northwestern Europe with cooperation across borders, with a particular focus on carbon pricing and sectoral strategies. The Paris Agreement set ambitious global goals to reduce greenhouse gas emissions and the EU submission confirmed its commitment to reduce emissions by 40% from 1990 levels by 2030; the UK government has now legislated its fifth carbon budget, with reduction 57% on similar timescale (2028-2032). Under the European Energy Union, cooperation is expected to grow further. In the UK as well, trade in electricity is expanding rapidly with growing interconnection, while domestic gas (as well as oil) production from the North Sea is declining.  The UK’s EU Referendum outcome has however thrown question marks over the trend and the nature of future interdependence. At the same time, one key UK initiative – the carbon floor price – has now been joined by the French government, which has gone on to propose structural reform of the EU ETS to provide a price corridor. The energy trilemma – delivering secure, clean and affordable energy - is a goal shared across European (and other) countries.

Session II of the workshop – ‘Does carbon pricing have a role and how might it be implemented’ was opened by session chairProfessor Paul Ekins, Director of the UCL Institute of Sustainable Resources, who gave a brief over view on carbon pricing and introduced the first session presenter: Dr Emilie Alberola, Program Director- Industry, Energy and Climate at the Institute for Climate Economics (I4CE). Dr Alberola examined the national approaches to carbon pricing and the EU Emissions Trading System (EU ETS) as a central instrument to achieve the 2030 GHG target.  Professor Michael Grubb of the UCL Institute of Sustainable Resourcesthengave a presentation titled: ‘Stagnation in Europe: A review of approaches to revitalising low carbon investment’. This presentation which included contributions from Dr Karsten Neuhoff and Jean- Charles Hourcade for CIRED, gave an overview of political economy observations regarding carbon pricing and the debate between price vs quantity. The presentation also looked at a multi-pillar approach to carbon pricing and ‘positive carbon pricing’.Professor Paul Ekinsmoderated the discussion following these presentations which touched on such issues as reforming the EU ETS through national approaches as well as encouraging investment in low carbon and the effect of shadow carbon pricing.

Andrzej Blachowicz, Managing Director of Climate Strategies, chaired the final session in which the group leaders reported back. Discussion regarding the sectors was then opened up to all workshop participants.

This workshop marked the conclusion of the Fifth Cycle of the French Embassy’s Science and Technology Department and UCL’s Grand Challenges programme.

“Over the last year UCL-Energy together with the Science and Technology Department of the French Embassy, has organised the fifth cycle with a focus on the implications of the Paris CoP and Agreement on Climate Change.  This has been an unprecedented opportunity to bring together some of the top academics and governmental players in this field, to reflect on what may come to be seen as a turning point in the history of Climate Change negotiations.

Our final workshop, attended by colleagues from the UK, France, Germany, Belgium and Poland, looked at the potential for voluntary international collaborations as a driving mechanism for change and an alternative to the model of formal global agreement that has been tried repeatedly over the 24 years since the Rio Earth Summit, but which has so far largely failed to deliver. It has been a great privilege to provide a platform for discussion and collaboration on these crucial topics through these events. We look forward to the 6th cycle of events, also focussed on Climate Change, under the leadership of our colleagues, Tom Pegram and Nick Watts.”

The Sixth Cycle of the UCL - French Embassy collaborative programme will be hosted by the UCL Institute for Global Governance.

The first event of this cycle is a closed workshop and public panel debate titled: Climate Governance after the Paris Agreement on 25 November 2016.