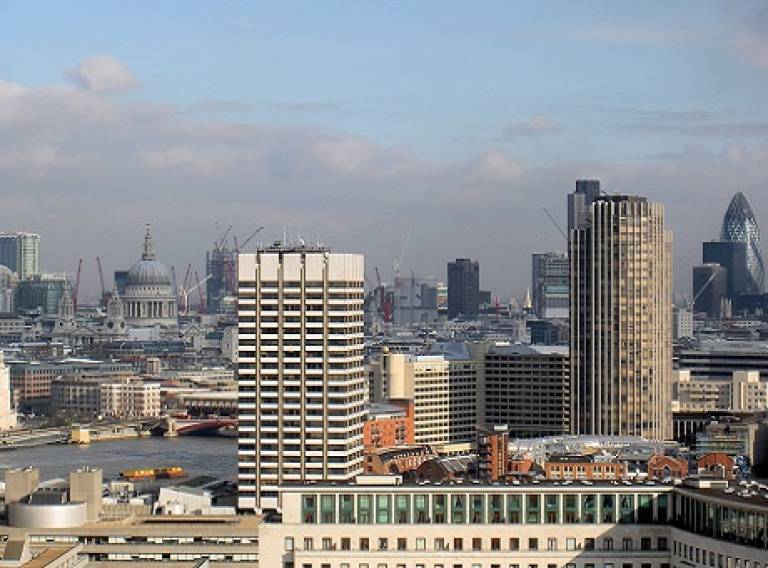 Philip Steadman and Ian Hamilton have been awarded a grant by EPSRC for a 12-month project on the use of energy in tall buildings, which will begin in November. The project will try to answer two questions:

2. Is it possible to provide the same floor area on the same sites as high-rise buildings, but on much-reduced numbers of storeys?

If the answer to both these questions is yes, then energy could be saved by discouraging tall buildings and encouraging low-rise.

It is generally believed that tall buildings are justified and unavoidable where land is in short supply. However research on density and building form carried out since the 1960s has shown that this belief is open to serious question. Of course if a building occupies the whole of its site, then the only way that floor area can be increased is by adding more storeys. But buildings, as they are made taller, need to be set further apart in order to preserve standards of daylight, privacy and natural ventilation. And buildings with different geometrical forms make use of land in different ways. Speaking very broadly, the same densities achieved by freestanding towers of a given height can be achieved in lower buildings in the form of elongated slabs or terraces, or in even lower buildings in the form of courtyards.

Meanwhile some scattered research has been done on the use of energy per square metre of floor area in high-rise buildings as compared with low-rise. Many factors can affect energy use in buildings. But for example, a study of offices in Hong Kong has shown a marked increase in energy intensity with height, mostly attributable to their air-conditioning systems. A similar relationship of height to energy intensity is found in naturally ventilated high-rise blocks of flats in England. It seems possible that these effects are due to increased exposure to the sun and stronger winds in taller buildings: the project will investigate this possibility. By contrast, other studies using simulation models have shown only small effects (or none) of height on energy use.

The project will use empirical data on energy use in tall office and residential buildings in the UK to answer the first of the two questions. Special attention will be given to a small number of boroughs in London – Westminster, the City, Tower Hamlets – in which large numbers of high-rise offices and blocks of flats are concentrated.  Individual existing and planned high-rise buildings will be analysed to look at options for rearranging the same floor area in lower buildings on the same sites. The findings will be published as guidance to architects, urban designers, planners and policy-makers, and in the professional and popular press, as well as in academic papers.