Parliament launch for UCL-Energy time of use tariff report

A UCL-Energy report on consumer demand for time of use electricity tariffs was launched yesterday in Parliament. 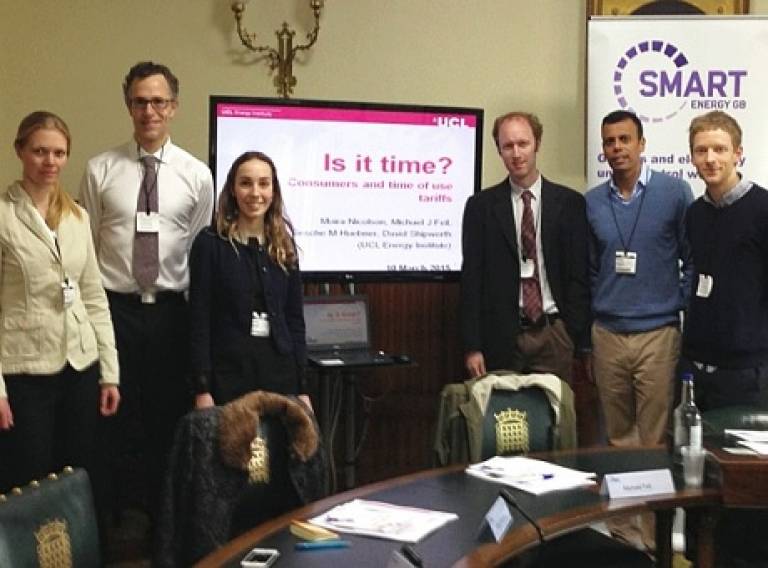 The event was chaired by Dan Byles MP, member of the Energy and Climate Chance Select Committee, and was also addressed by Sacha Deshmukh, CEO of Smart Energy GB (who supported the work). The launch was followed by a wide-ranging discussion with key representatives from the energy industry, the regulator Ofgem and the Department of Energy and Climate Change.

In the report, Is it time? Consumer attitudes to time of use tariffs, the researchers found that almost a third of people in Great Britain feel favourably towards switching to a time of use tariff which charges more for electricity during peak periods on weekday evenings but less overnight and at weekends. Such tariffs can help reduce peaks in demand which pose problems for electricity network costs and security. These peaks may become worse in future as more people use electric vehicles and heating.

The research, which used online surveys of over 4000 people across Britain, found no strong evidence for demographic differences in willingness to switch new time of use tariffs, which is important if everyone is to realise the potential benefits of smart meters. However, people who own electric/hybrid vehicles or wet goods with timers (such as dishwashers), along with those who trust their electricity supplier, were more favourable to switching. More than a third of people said they would be prepared to have their heating turned off and on remotely by energy suppliers (within tightly defined bounds) in return for a discount on bills.

The report is one of the first outputs from UCL-Energy’s new ‘People, Energy and Buildings’ Group, and was authored by Michael Fell, Moira Nicolson, Gesche Huebner and David Shipworth.