Much has been talked about using Central House, home to the UCL Energy Institute, as a living lab to investigate the energy use of occupied buildings. 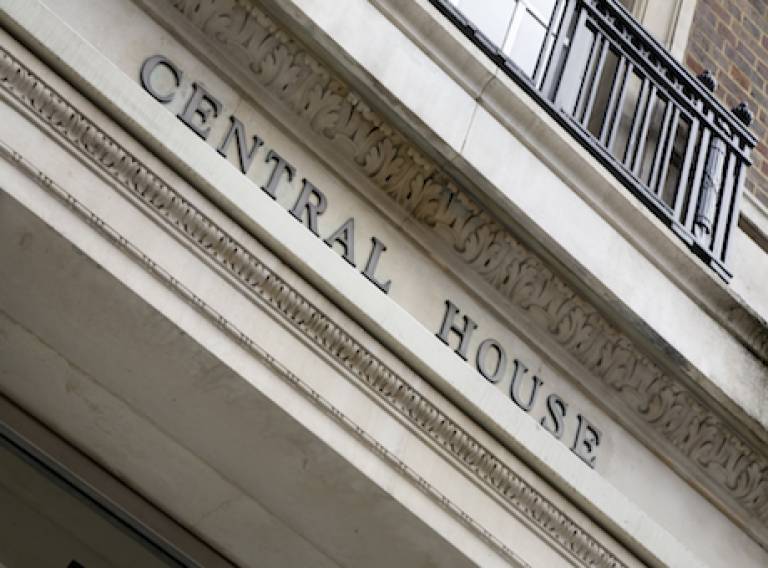 With the Central House Living Lab WiFi project, the first fruit of this work has now been exhibited in the foyer of Central House for a week following the project launch on the 25th of February. In the past, researchers have often struggled to connect building energy demand and occupancy. Wireless network data provide a unique opportunity here that has not yet been utilized in detail in the age of WiFi-enabled gadgets that occupants bring into buildings. The Central House Living Lab WiFi project aimed to investigate the potential of these hidden data sources. This UCL Estates funded project was carried out by Paula Morgenstern from the UCL Energy Institute, Nelly Martinez from the Bartlett School of Architecture and Kostas Cheliotis from the Centre of Advanced Spatial Analysis (CASA) in a cross-departmental collaboration.

As one outcome of the project, a visualization of Central House was created that can be used by facility managers and occupants to better understand building energy use and their influence on it. The visualisation shows the electricity consumption of each floor on an hourly basis as well as an estimate of how many occupants were using each floor at the time. “This is a novel way to present data which can catch people’s interest in a way that spreadsheets and graphs cannot.”, explains Paula. And indeed, the reactions after the launch event when the visualisation was first shown in the foyer of Central House, are very positive and many users of Central House were seen during the following days to take a good look at the exhibit.

The data to feed the visualisation was obtained over the last 9 months in collaboration with many UCL departments including IT services, Security and of courses Estates themselves. So as a secondary outcome, the project also helped to build bridges within the UCL community and shows the potential of bringing people together. The occupancy estimate used in the visualisation is based on the hourly number of connections to the campus wide WiFi network eduroam. The relation between number of people and number of WiFi connections was validated through a user WiFi survey carried out with all occupants of Central House last year. In addition, data from door access based on swipe card use was included to improve the quality of the occupant estimate.