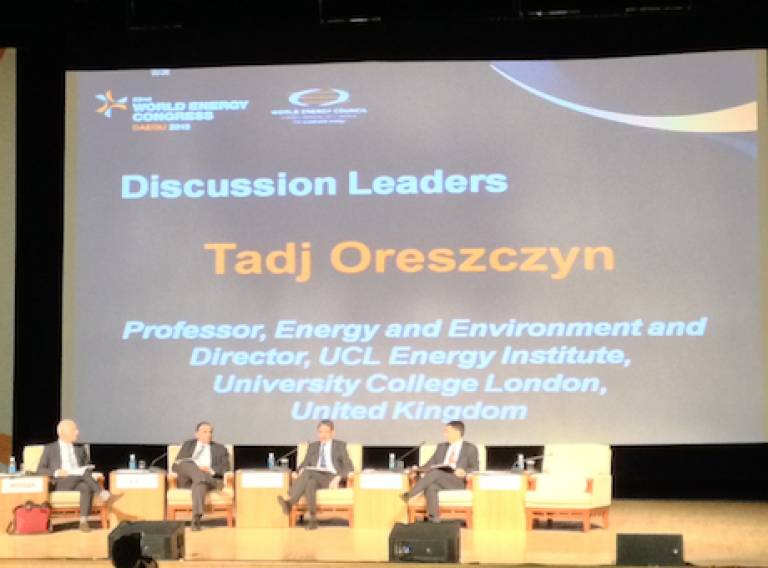 Every 3 years the energy industry, government departments/ministers, NGO’s and the “odd” academic get together in some scenic location to debate energy present and future. The following are personal reflections by Tadj Oreszczyn via discussions with Andreas Schafer and Colin Colder (CEO PassivSystems) who attended the 2013 World Energy Congress which focused on the Energy Trielemma of security, affordability and sustainability in Daegu, Korea from the 13th - 17th October 2013.

Attending these events is as much about visiting the country as it is the actual congress and one cannot but be impressed by Korea. In the last 50 years Korea has transformed itself into a fully developed country with a population slightly lower than the UK in an area the size of Ireland. Although we only travelled through a tiny portion of the country I challenge anybody visiting Korea to find any litter, graffiti or flat bit of land that has not been built on or is being farmed even in the urban areas. Watching a graph of the rapid historic development of per capita GDP and per capita primary energy use is fascinating, see Gapminder. Korea has achieved its global trading position and high income per capita despite using some of the most expensive energy in the world for power generation. The cost of energy is not the deciding factor in the economic success of a country. Korea now has a GDP/capita only slightly lower than the UK with a primary energy demand/capita slightly higher. This is of course because we have outsourced most of our manufacturing and heavy industry to Korea, it is of course difficult to find anybody that has not got a Samsung phone which is bigger than yours. Like Japan, Korea has none of its own fossil fuels, it is therefore heavily reliant on imported gas, coal and oil. It currently generates 30% of electricity from nuclear, (more of this latter).

So what were the key messages we bought back from the Congress? This is the year that both the International Energy Agency and the World Energy Council (WEC who organise the Congress) have published reports which highlight the importance of energy efficiency and energy demand in tackling the energy trielemma, this is the good news. Historically, WEC has developed from the traditional energy industries (fossil and nuclear) with an original focus on security of energy supply. So it is encouraging negawatts are discussed as well as the size of the efficiency industry. However, there was little representation from the energy demand sector, little discussion about what services people may want and how these may be met (other than the 20% of the world’s population that does not yet have access to electricity). Of course there was mention of demand side management/ smart grids as part of the mix but no real discussion about what people want from this technology other than helping industry to balance the grid. There is however a realisation that renewables are part of the future energy mix (something that would have not had serious discussion in the past) however as an industry it was still relatively under represented and was generally thought of being the most expensive and least useful (which of course it is if you are predominately looking at the short term security of supply, but ignore the long term and in particular climate change).

Many WEC members clearly see that the future will be different but ideally not very different. This schizophrenia is evident in the scenarios that WEC have recently produced, Jazz and Symphony, (why can’t scenarios have names which actually communicate what they mean rather than involve some sort of psychological experiment trying to work out what was going through people’s minds when they came up with the names!). One seemed to be business as usual and another with more government engagement to promote demand reduction etc. Jazz resulted in CO2 levels of 700ppm by 2050 (If I understood their graph correctly), which of course would not deliver the trilemma of sustainability without massive Carbon Capture and Storage (CCS). Now the most recent survey WEC have done of their members suggests that CCS is less likely to be seriously deployed. In fact there was very little discussion of CCS or industry representation, it appears as if CCS is seriously off the agenda.

Despite recognising the long term needs for the trilemma, industry in particular does not seem to be stepping up to the mark, or certainly not at WEC. Instead there is a focus on the current system and energy price (which often involves hidden subsidies), this may be understandable given the recession affecting much of the developed world, nobody wants to be last out of the recession and of course fuel prices play a role in this. Much was being made about the role that shale gas was having in the States to both reduce costs and reduce carbon emissions. However, an unintended consequence of shale gas is to put up carbon emissions in other countries, this is before you look at methane leakage etc! The drop in price of gas in the States has resulted in a shift from American produced coal to American produced shale gas. However, coal production has not been abandoned in the States as it was in the UK when it made its dash for gas under the Thatcher government which contributed significantly to the UK meeting its early carbon targets. Instead, cheap coal has flooded the international market which has meant that in Europe new highly efficient CCGT gas plant is being mothballed and old inefficient coal plant being bought into action again. So in effect the USA has outsourced its carbon emissions as a result of Shale gas, not reduced it!

So why don’t we all use shale gas? There was scepticism amongst some attendees as to the level of shale gas reserves and the difficulty to extract in some countries, (regardless of the fact that we already have more than we can ever burn of fossil fuels if we are to meet carbon targets, see Paul Ekins recent article). GDF (Gaz de France) has been examining where it will invest in terms of shale gas and they stated that France and Poland had the largest potential reserves. But, the French government has banned shale gas exploitation, and in fact this ban has recently been tested in court and upheld. The implication being that at least for the next 4 years France is off limits re shale gas. So where, other than Poland, were GazProm looking to possibly invest? Well of course the UK, who was seen as being most receptive to encourage shale gas exploration. The great advantage of globalization is that there is always a more receptive country if your own country will not accept what you are trying to sell. This also applied to nuclear as well as shale gas , Korea produces 30% of its electricity from nuclear and was planning to expand this to 40%. However, it has recently stopped this expansion due to Fukushima and the fact that many new nuclear components had not been constructed from appropriately certified components. So of course the Korean companies are now looking to help build reactors in the UK, where our construction industry is notoriously good at certifying their work! According to industry, there is supposedly a global renaissance in nuclear with significant investment in China and UAE. It was often repeated that nuclear was the cheapest form of electricity, the UK may want to differ given the hard bargaining that is currently been undertaken regarding the guaranteed price paid for electricity being twice current levels, for the next 30 years.

So things have changed but many of the same old arguments seem to be continually rehearsed with very little new factual information. It is hard to see how the trilemma will be delivered given the current market. Industry can I am sure step up to any challenge that governments and international agreements come up. It is hardly surprising that industry is currently motivated by the current system in place, particularly as governments seem to not be able to stick to policies, an issue which undoubtedly stops industry investing in what is needed.