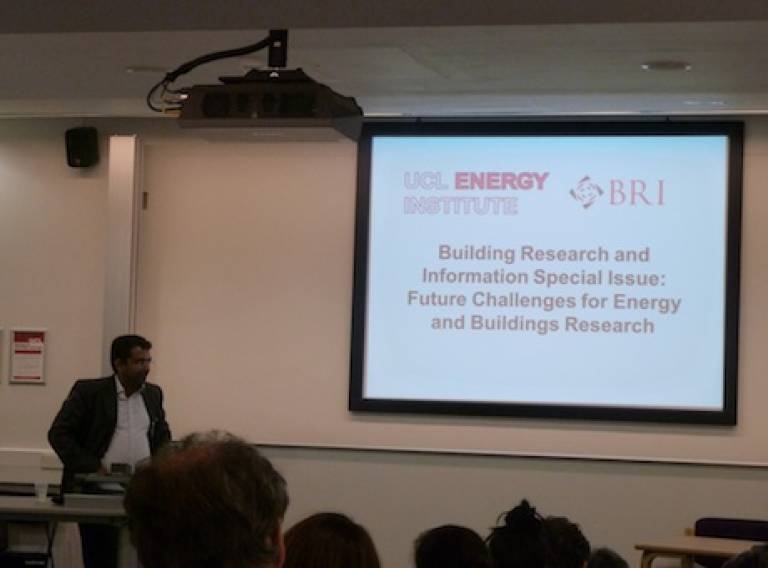 On Tuesday 11th September, the UCL Energy Institute hosted a variety of high level speakers from industry, Government and academia to discuss the nature, objectives and culture of research and how relationships between research communities, funders and stakeholders are evolving. There was huge breadth in the issues addressed, but two themes stood out for me, these were the difficulty of inter- and multidisciplinary research and the emerging role of the social sciences.

It is now acknowledged that to address the energy consumed in the built environment we need input from a multitude of disciplines. The difficulty of coordinating these disciplines through inter- and multidisciplinary research was highlighted by its prevalence in the afternoon’s discussions. Dr Libby Schweber (Reading University) detailed the differences between interpretivist and positivist approaches and emphasised the need to combine research ideas, particularly the emerging focus on the non-technical, in the study of energy and buildings. Many of the following speakers mirrored her words. A word ofcaution came from Dr David Shipworth (UCL Energy Institute) who highlighted the potential pitfalls with interdisciplinary research. He suggested that disciplinary boundaries are ‘impermeable to uncertainty’. A lack of knowledge of the methods of different disciplines and their limitations can mean that the context of the data is lost, particularly its uncertainty. This is something that we all need to be aware of when sharing information across disciplines.

As a social scientist myself, the widespread recognition of the social sciences within energy and buildings research was particularly encouraging. Professor Jim Skea (Imperial College) referred to the positive progress with a ‘platoon’ of social researchers in DECC, something that was solidified by the presence of Adam Cooper, Head of Social Science Engagement at DECC. In Adam’s response session he reiterated that the integrated analysis of the social and the technical is ‘a no brainer’. In moving forward with energy research in buildings, Professor Jim Skea called for rigorous ‘gold standard’ evaluation techniques to understand the success of interventions. Although not presenting a paper, Bill Bordass (Usable Buildings Trust) did comment that a lack of rigorous information may have been used a ‘smoke screen’ for a lack of action and highlighted he sad reality that interpretivist qualitative data has often been treated as anecdotal.

A point that particularly resonated with me came during Adam Cooper’s response, when he suggested that the questions we ask determine the answers received. With this in mind should we, or those that fund research be asking different questions in order to focus research in energy and buildings on those elements not previously addressed, particularly the social factors?

‘Future Challenges for Energy and Buildings Research’ is a special issue of Building Research and Information. It features full articles authored or co-authored by Dr Libby Schweber, Professor Jim Skea, Dr Colin Axon and Professor Rajat Gupta (Oxford Brookes) , all of whom spoke at this afternoon’s event.