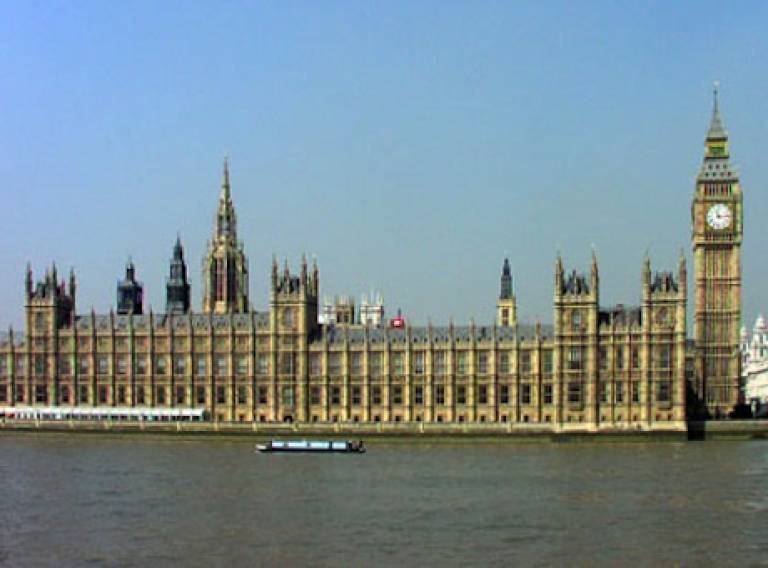 UCL-Energy PhD student Charlie Morris-Marsham attended the 'Local Authorities: Taking advantage of the Green Deal' event at the House of Commons on Tuesday 23 October 2012 and wrote the following report:

Around 50 attendees gathered in a House of Commons Committee Room for this seminar on how local authorities could take advantage of the Green Deal.

According to Christoph’s presentation the advantage of the ‘producer’ and ‘provider’ models were in the use of the Local Authority (LA) brand said to increase uptake by a factor of 10-20 (over an independent scheme). Under the ‘producer’ model (whereby the LA partners with a particular Green Deal (GD) provider) LAs may be able to negotiate referral fees from the provider and the preferred GD provider (‘delivery partner’) can help the local authority negotiate ECO, and the other funding sources which can contribute to GD finance, and provide a warranty (though what exactly this could/would cover was not clear).

Christoph mentioned Feed in Tariffs under GD - this is a controversial issue to date as previous guidance from DECC and EST has implied is that Feed-in Tariffs will not be able to be used to meet the Golden Rule. Also mentioned was the Green Deal Finance Company, which is expected to be lent at least some of the £300bn endowed to the Green Investment Bank, and therefore should be able to deliver at least some of finance for Green Deal.

According to Christoph’s models some finance could also be provided by LAs and, theoretically, they could profit by lending to delivery partners at a higher cost of capital than they borrow at. The ‘at risk’ figure to these LAs would be £1.5-2m in start-up costs. However, in my view, the pitfalls of this model include reputational risk if the partner or scheme fell into disrepute (and LAs are famously risk-averse when it comes to reputation) and risk of bad debt (default rates under the Green Deal are as yet unknown). Needless to say the financial nous required by local authorities considering either the provider or producer model is significant (again perhaps something local authorities are not famous if you remember the Icelandic bank saga!) Finally in order to attract a delivery partner LAs need to be of a considerable size, or able to partner with other authorities to attain a sufficient aggregated size.

Dave Allport (Birmingham Energy Savers) shared Birmingham’s experience of becoming a GD ‘producer’ – they have recently named Carillion as their preferred bidder (i.e. prospective delivery partner). Birmingham’s drivers to involvement in the Green Deal were high levels of hard to treat properties (40%) and households in fuel poverty (27%). They are planning to use their own stock (schools and leisure centres) to provide some of the demand for GD and the nature of GD repayments (i.e. tied to energy bills) is an incentive as there is uncertainty about how long such properties will remain council-owned/run (with the School Academy and out-sourcing agendas). Birmingham Energy Savers are now hoping to gain revenue by assisting other local authorities set up similar contracts, which is one way their initiative is hoping to be self-financing. The council see the Green Deal as an excellent opportunity to upgrade housing and will be encouraging assessors to note hazards, etc. and feedback to relevant council teams.

The questions that followed were largely from industry and consultancy representatives, topics included the issue of insurance for GD providers (apparently none available at present) and who will pay for home assessments (under the Birmingham model they are free to consumers, i.e. costs are borne by providers). This lead to discussions of pre-assessments, i.e. making sure those assessments that are done have the best chance of leading to a Green Deal (the model Birmingham used was based on 1 in 2 assessments leading to a GD). The final comment was on the cost of ECO; apparently it was estimated to cost utilities £1.2bn in total is now looking like costing around £1.4bn each.

Overall the sense of the event was that Local Authorities now have a key role to play in delivering the Green Deal (in the absence of other commercial interest) and that there are, potentially, some advantages to LAs being involved in GD although also some risks.

All views and descriptions within this event report are those of Charlie Morris-Marsham, follow Charlie on Twitter - @EnergyDemandRed