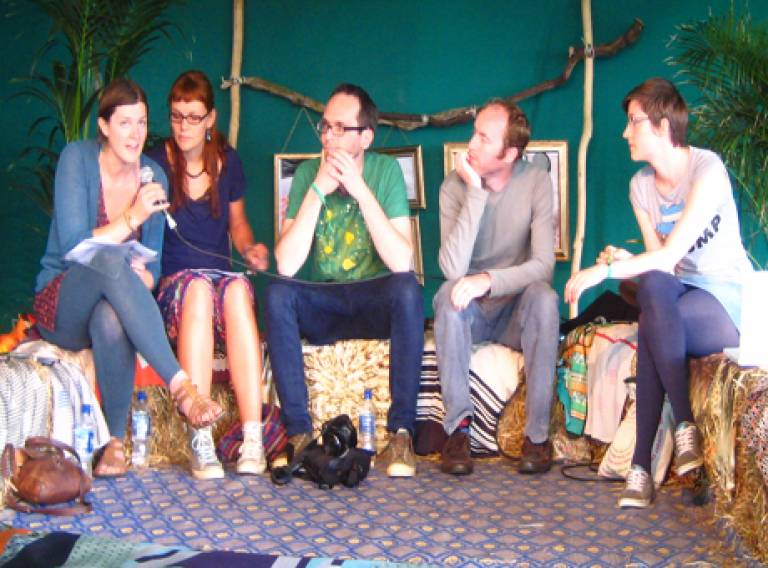 Several members of UCL Energy Institute participated in this year’s Wilderness Festival held in Oxfordshire, 10-12 August 2012. Featuring alongside big name acts such as Rodrigo y Gabriela, Wilco and Spritualized they presented a number of talks in the festival’s “Natures” tent (which had a theme of the philosophy of science and sustainability).

First up were Faye Wade, Paula Morgenstern, Paolo Agnolucci, Kate Simpson and Mike Fell with a discussion entitled “The Efficiency Delusion?” Their presentation debated the reasons why, and extent to which, efficiency improvements may actually increase energy consumption (a phenomenon known as the Jevons Paradox), and considered the possible technological and social responses.

A later session on shipping, globalisation and a return to sailing merchant ships was hosted by the New Dawn Traders. Lecturer in Energy and Transport Tristan Smith spoke about ongoing research at the institute that looks at these systems problems, including collaborative research with the company B9 Shipping to progress zero-carbon marine transport concepts.

The last session of the weekend was taken by Craig Robertson, an architect and Energy Institute PhD student. Craig spoke about the relationship of building design to energy consumption. Using historical and contemporary case studies he argued for a better informed and more collaborative approach to future architectural design utilising both the tacit knowledge of building users and designers as well as a free exchange of building energy consumption data.

All the talks were delivered to a packed tent and followed by lively discussions. With the success of UCL’s Bright Club and popularity of radio shows like The Infinite Monkey Cage with Brian Cox and Robin Ince there is clearly a strong public appetite for good science delivered in a frank and entertaining way – so keep an eye out for more Energy Institute appearances at similar events in future.