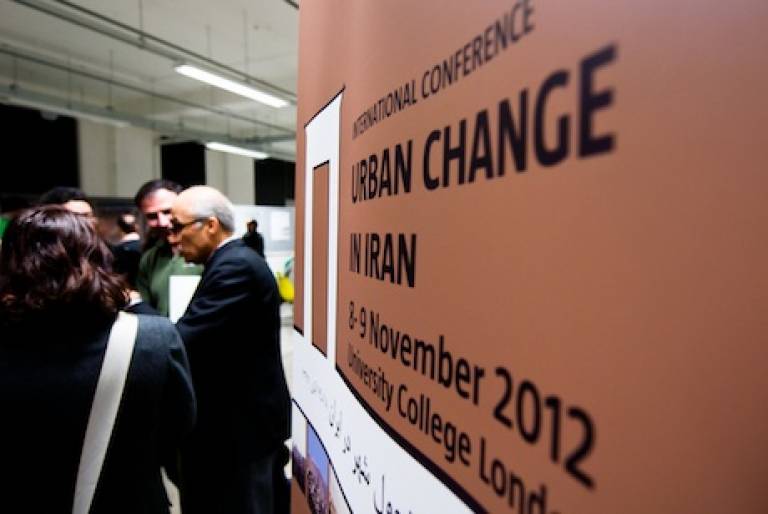 The International conference of URBAN CHANGE IN IRAN was held on 8th and 9th November at UCL. Hosted by the Bartlett DPU, it was an independent bottom up initiative, which attracted support of both Iranian and non-Iranian built environment students, academics and professionals from around the globe. It received 625 abstracts during call for papers period, and well over 120 of those academics and professionals attended the conference.

On the morning 8th November, Prof. Alan Penn, Dean of the Bartlett, officially opened the conference. It was then followed by the welcome message from the host; the Bartlett Development Planning Unit and presented by Prof. Yves Cabannes, Scientific Chair of the conference who introduced the meaning of urban changes arising from the abstracts and the full developed papers. Over 120 academics and professionals attended the conference.

The conference received special attention from UNESCO Director General, Irina Bokova as well. Within the message that was recited on behalf of her, the Director General highlighted the importance of the issue for contemporary Iran and its relevance for cities across the world, noting, “Iran has given humanity one of the worlds oldest ‘urban civilizations’ and possesses a rich cultural heritage”. Therefore she commended UCL on undertaking this initiative.

The driving force behind the conference since two years ago and the principal organiser was Farnaz Arefian, PhD candidate at DPU. She linked the celebration of World Town Planning Day, 8th November, to the conference, and acknowledged the organising team of enthusiast volunteers, and supporting institutions that made it happen.

The academic debates started with Dr Parviz Piran, representative of the Centre of Excellence in Urban Design at Shahid Beheshty University, highlighting the importance of context-based urbanism by a brief comparison between traditional Iranian cities and contemporary practices of urban development. Dr James Jackson of the University of Cambridge raised the problems of earthquakes and the fact that Iran places fourth among the countries prone to natural disasters in the world.

The academic sessions in day one mainly addressed historical urbanism and urban continuity and identity, as well as socio-cultural drivers of urban change. Notably, Speakers also illustrated that water-sensitive urban design in Iran has been practiced for many millennia, through the use of wadis a network of tunnels, which go back to far as 2000 years ago.

A lively panel discussion, moderated by Prof. Ali Modarres, focused on the global dimensions of urban change. The session provided an in-depth conversation that illustrated the degree to which urban changes have converged or diverged based on urban localities within the larger network of cities and nations, providing the necessary context within which urban changes in Iran can be situated and understood.

Later on the day participants attended the Bartlett exhibition space at Royal Ear Hospital, where the poster display of 69 posters and DPU reception were held.

Day two addressed more current issues of development and urban design, including the impacts of urban projects and programmes. Moderated by Farrokh Derakhshani another panel discussion opened the opportunity to put in perspective Iranian urban transformations with those taking place in other metropolis from the region such as Istanbul and Cairo.

After the end of academic discussions on 9th, participants attended the Bartlett at Royal Ear Hospital, where the winning posters were announced and the farewell was held with Iranian pastries.

During coffee breaks and lunch breaks participants also visited a mixed parallel exhibition, combined of DPU mapping exhibition and the oldest maps of Persia, as well as examples of contemporary urban design projects in Iran. The ambiance was so vibrant by lively debates; informal discussions and networking as such many delegates did not like to end it. Feedback on the event indicate the international conference on URBAN CHANGE IN IRAN was a complete success.